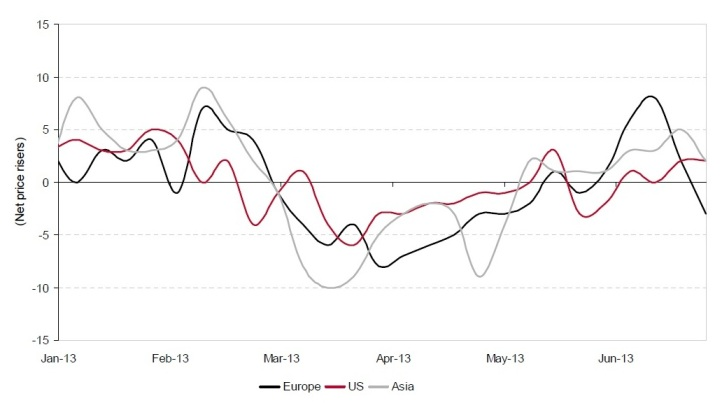 DEMAND for chemicals and plastics in Asia should be seasonally robust at this stage of the year, when Chinese companies typically prepare for the peak manufacturing season, but this isn’t happening in 2013, warned Paul Satchell, chemicals analyst with Cannacord Genuity.

“Goods are manufactured during August and September [the peak season], for export to the West for Thanksgiving, Christmas, New Year etc,” wrote Satchell in his latest note to clients.

“Purchasing of the chemicals inputs to those manufacturing processes should be running at high levels currently, so even the relatively moderate decline in the Asia line (see above chart) is bearish; the fact that it has weakened, albeit modestly, is a bearish indicator for the likely success of peak manufacturing season,” he added.

(The Volume Proxy, featured in the above chart, is a leading indicator by Satchell based on weekly changes in spot prices assessed by ICIS for 33 products in the US, Asia and Europe. The index is simply calculated from the number of rising prices minus the number of falling prices.)

The chemicals analyst believes that the rise in  the Asian chemicals and plastics Volume Proxy, immediately before the recent dip, is largely the result of stock-building by traders ahead of what looks likely to be a disappointing peak manufacturing season.

And, as we discussed yesterday, polyethylene (PE) traders have also built inventories thanks to the surge in bank lending during Q1 of this year, which seems likely to apply to other chemicals and plastics. Availability of credit has now become much more restricted.

We also think that there could be another factor at play here: Misleading export data, up until May this year, when Beijing clamped down on over-invoicing through Hong Kong, could have given the false impression that real export trade was robust – again leading to stock-building by traders.

There has also, of course, been misplaced confidence in the strength of China’s domestic demand. The chemicals industry in general has been under the impression that China’s GDP growth will be stronger in H2 than the first of the year, when, in fact, it seems likely to be substantially weaker.

But now most people are, at last, coming to terms with the deep structural changes that have to be made to China’s economy, which means lower growth for the 1-2 years at the very least – and likely much longer. What worries the blog is that this is much too late to prevent cost-cutting, and even bankruptcies, across the industry, as sales and investment targets are going to be missed.

Satchell’s Volume Proxy, as will also see from the above chart, shows a much steeper decline in Europe.

“The most striking feature of the chart is the scale of the collapse in the Europe line,”  said Satchell, in the same research note.

“We saw the recent peak as a corollary of the market disruption following flooding in the key European waterways.”

Restoration of normal logistics following the disruption could be a factor in the fall, but the fact remained that the Europe line was negative and falling, just as we headed towards the traditional summer lull, he added.

Satchell said that softer demand over the summer period could be prolonged when underlying demand patterns were weak. The summer lull can even be absent when demand is strong.

“The extent of the fall in our Europe line could therefore be a sign of an early start to the summer lull, which in itself would be a negative indication for demand,” he wrote.

By John Richardson APPARENT polyethylene (PE) demand in China rose by 10% in Jan...

By John Richardson CHINA’S small and medium-sized (SMEs) may already be findin...