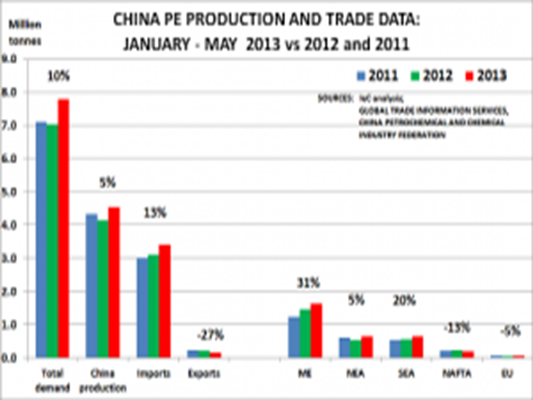 BACK in 2009, virgin polyolefins demand growth in China was boosted by a sharp drop in imports of recycled or scrap plastic resulting from tougher enforcement of environmental regulations.

Now another government crackdown on imports of scrap material, again due to environmental concerns, might have provided a further benefit to demand growth for virgin polyolefin resins – and, of course, for all synthetic resins.

The new campaign against scrap imports is another illustration of our long-running argument that the outlook for petrochemical demand growth in China is becoming increasingly complex because of constantly evolving social, environmental, economic and political factors.

The latest data that we have available, from official government figures and Global Trade Information Services data, shows that apparent PE demand growth in China was up by an impressive 10% in January-May versus the same period in 2011 (the blue bar in the chart above). This is also significantly better than the decline seen last year (the green bar).

The increase seems likely be partly the result of over-stocking by traders ahead of what might well be a disappointing peak manufacturing season.

But a further factor could turn out to be Operation Green Fence, the new clampdown on scrap imports, which was launched in February of this year.

“I think it’s an important factor behind the recovery in PE demand growth,” an Asian-based source with a North American-headquartered PE producer told the blog.

The 10-month-long initiative involves setting a limit of 1.5% prohibitive, or allowable, contaminant in each bale of plastic and other scrap material, such as metal, textiles and paper, imported into China, according to this article on the website of Vangel – a Baltimore, US-based recycling company.

And this article, in the Christian Science Monitor, says: “Stepped-up inspections of containers filled with scrap metal, paper, and plastic at Chinese ports and a merciless application of the rules, has intercepted more than 800,000 tons of illegal waste since the campaign began in February.

“Now nervous traders are refusing to ship consignments of recyclables that might contain unacceptably large amounts of unrecyclable materials (anything from unwashed items to the wrong kind of plastic to random bits and pieces of garbage that get mixed in with the recyclables).

“In China, much of the imported plastic scrap is recycled in primitive, family-owned workshops with no facilities to treat waste water before it flows into local rivers.

“That trash has to be sorted from the recyclables, then buried or burned, further degrading China’s environment.

“Though Chinese regulations have long banned excessive levels of contamination in imports of recyclables, they were rarely enforced until Green Fence was launched, traders say.”

The clampdown led to a 5.5% fall in imports of plastic waste during the first four months of this year, according to China’s General Administration of Customs. This follows a four-fold increase in imports over the last decade.

A big question is whether the campaign will carry on beyond 10 months.

Some traders in plastic scrap, quoted in the Vangel article, argue that economic pressure will result in officials relenting on the more stringent enforcement of legislation. The recycling industry is a major employer in China, and, as the economy continues to slow down, unemployment may become a sensitive social and therefore political issue.

[But] “Well-placed observers do not think that the old lax habits will reassert themselves,” adds the Christian Science Monitor.

“ ‘Before Green Fence, both companies and customs officials were unclear about the laws and regulations,’ says Wang Jiwei, secretary-general of the China Metals Recycling Association.

” ‘After the campaign, both sides will understand the laws better, and I think they will continue to be enforced’ “.

The next phase of the campaign is expected to involve restrictions on the issuing and resale of licenses that allow companies to import scrap material.

By John Richardson The big question this morning for anybody concerned about Chi...

China PE Demand Up By 13% On Environmental Concerns, Restocking