By John Richardson on 23rd July 2013 in China, Company Strategy, Economics, US
SHARE THIS STORY 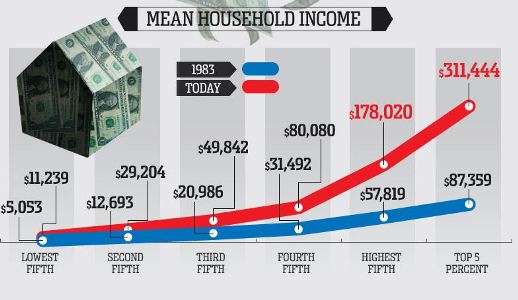 ALL is right with the world if you are one of the small percentage of people, globally, who invest in US stock markets. Last week, as this article from Barron’s pointed out, the Standard & Poor’s 500-stock index hit new highs.

And on Monday of this week, the S&P hit yet another all-time high.

But the problem is that, as Barron’s points out, the stock-market rally is largely the result of the smoke-and-mirrors nonsense of Ben Bernanke’s comments regarding the Fed’s timing of scaling back its bond-buying scheme.

The world’s economy has been on life support, thanks largely to Fed intervention, which, of course, has done nothing to address underlying economic problems, which include ageing populations, chronic youth unemployment and widening income inequality in the West (see the above chart, which refers to the US).

And further, as Barron’s continued, the S&P has its head firmly in the sand when it comes to China. The investment newsletter wrote:

“Rather than being jarred by the news [of falling Chinese GDP growth), US investors shrugged.

“Why the change of heart? Unlike three months ago, when investors were placing big bets that China’s policy makers would pump cash into the economy to spur growth, the market seems to have accepted the fact that sluggish growth for the world’s second-largest economy is its new normal. Indeed, the People’s Bank of China has been forecasting that growth would moderate to 7.5% for some time.

“But that 7.5% target may prove optimistic. China’s leaders are forcing the economy to undergo a radical transformation. Gone are the days of booming exports and debt-funded infrastructure spending. Instead, China wants to see consumers spend more of their hard-earned cash and its businesses reduce their reliance on easy money. Success could mean growth well below target.

“That should worry investors. The S&P 500’s big gains this year have been driven by rising price/earnings ratios, not rising earnings, says Deutsche Bank strategist David Bianco. The index now trades at 15 times 2013 earnings, up from 13 times one year ago. “

Barron’s added that some stocks, including those of certain chemicals companies, continue to defy gravity, as their share prices are failing to reflect their heavy exposure to sales in China.

By John Richardson Apologies to readers for the test blog post, by one of our co...

By John Richardson LAST week’s decision by China to give its banks the freedom...