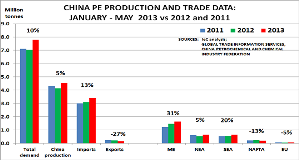 APPARENT polyethylene (PE) demand in China rose by 10% in January-May of this year compared with the same period in 2011, according to the above chart from Global Trade Information Services (GTIS), which was compiled by fellow blogger Paul Hodges.

We worry that this recovery is largely the result of inventory building by some local traders and producers earlier this year.

The traders were able to build stocks when credit was much easier to obtain, before the big shift in direction on lending availability, which occurred in late June.

(Another factor behind the “recovery”, as we have discussed before, is that there were stronger sales to end-users in June because of the reported delay to the start-up of the ExxonMobil complex in Singapore. But supply has now lengthened because ExxonMobil is said to be on-stream).

And the traders and producers were willing to stick their necks out on stock building because they believed that economic growth would be stronger in the second of the year than it was in the first half.

This belief might have been the result of what UK-based copper consultant Simon Hunt says was a mini-economic recovery.

“Construction activity is improving if what we saw in Qingdao is typical of a second tier city,” said Hunt in his June 2013 China Visit Report.

“A year ago all activity on buildings, whether commercial or residential, had ground to a halt. Starting around September last year, we noticed a gradual improvement reaching the point that activity appeared to be normal when we were there a week ago.”

Here we come in full circle back to our original point about greater credit availability amongst traders. In mid-May, we warned that a surge in lending had created fairly widespread misplaced confidence over a sustained economic recovery.

But economic activity has more recently slowed down, as a result of both the credit clampdown in late June and weaker export orders, he added.

Manufacturing in general will need to adjust to holding lower stocks as the economy undergoes a long-term slowdown.

“Investment in inventories must fall sharply, since its level depends on the growth of an economy, not on the level of activity,” wrote Martin Wolf in this Financial Times article.

“Think about it: in a stagnant economy, inventory accumulation would normally be zero. Again, other things equal, an economy growing at 6% would need 60% of the investment in inventories of one growing at 10%.

“The immediate impact of this adjustment would be a sharp decline in investment in inventories, before their growth resumed at 6% a year, from the now lower level.

“Moreover, businesses might well fail to anticipate the economy’s slowdown altogether, particularly after years of far higher economic growth. They would find themselves burdened with rapidly rising inventories and would then be obliged to slash inventories, and so levels of output, even further.”

The Martin Wolf article is further evidence that the consensus on China has shifted to where we believe it should have been 18 months ago.

By John Richardson SHALE gas may never be a significant energy solution f...

By John Richardson DEMAND for chemicals and plastics in Asia should be seasonall...