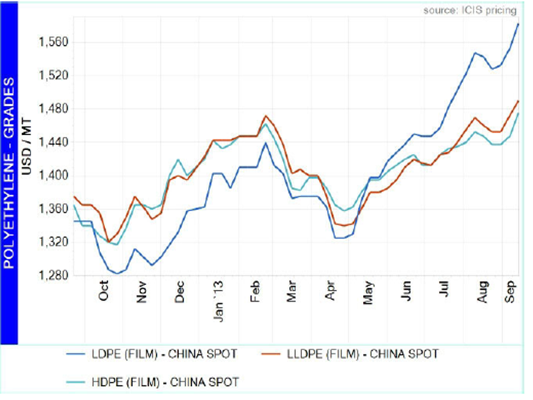 JOHN Maynard Keynes, the famous economist and speculator ,  once said “the market can stay irrational longer than you can stay solvent.”

In other words, if you are a trader you can sit around for ages waiting for the fundamentals to drive any particular market, and, as a result, go bust – or at the very least miss out on lots of fantastic opportunities.

Looking at the fundamentals back in April, taking long positions in polyethylene (PE) and other chemicals and polymers in China seemed to be about as logical as supporting the English soccer team, Leeds United (unfortunately, the blog’s team).

And as late as the end of June, when China started to increase the cost and reduce the availability of credit, it seemed to make more sense to bet your shirt on short rather than long positions in most chemicals and polymers.

What many people didn’t fully grasp was how quickly the credit situation would change. More liquidity was made available post the June squeeze. The extra cash might continue to slosh around the financial system until at least the end of this year.

Perhaps of equal importance to the current availability of credit – and thus the appetite for speculation – might have been the liquidity surge in Q1 of this year. James Gruber says that it takes around six months for an increase in credit to fully work its way into the Chinese economy.

Leading indicators, are of course, a crucial part in attempts to predict where chemicals markets might be heading. One useful leading indicator in China could be the ebb and flow of credit, particularly right now as sentiment swings back and forth between the extremes of “everything is back to normal” (i.e. the pre-reform days) to “Oh dear, that’s it –the big adjustment means the world has come to an end”.

Another thing that has buoyed chemicals and other commodities markets of late is the recovery in investment spending as the government tries to shore-up GDP growth. This extra money could also slosh around the system for a good while longer.

But chemicals producers are obviously mainly in the business of making rather than trading things. And so the difficult job, as they plan for 2014, is to separate all the noise from what is really likely to happen next year.

What we think is of help are these comments from Barclays, taken from one of their recent investment notes:

One of the bright spots for commodity markets recently has been a consistent pick-up in China’s import demand from the low point in Q2, when imports of almost all major commodities fell into negative territory. August was another strong month, showing a continued broad-based recovery that commenced in June and accelerated in July, with iron ore, copper, crude oil and soybeans imports all in positive year/on/year territory for three consecutive months.

However, this growth is not the outcome of a successful transition towards the more consumption-led growth pattern that the government is targeting. Rather, it has been fuelled by a lurch back towards the familiar twin growth engines of construction and investment, as domestic private demand has failed to take-off as a significant growth driver.

As such, the recovery is likely to prove short-lived and our China economists recently revised down their 2014 growth forecasts to just 7.1% from 7.4%.

Nevertheless, commodity import growth is likely to ease back before then. Partly because Q4 12 was a relatively strong quarter for commodity imports (with the notable exception of copper), so comparisons will become more difficult over the next few months. Additionally, imports have received what we expect to prove a temporary boost from inventory cycles recently and that may not persist.

Tomorrow, we will look at the immediate prospects for the polyester chain. We already know where the chain is likely to head in the long term, but again, of course, people are trying to fathom out the timing.

By John Richardson WHEN is a recovery a sustainable recovery? This a key questio...