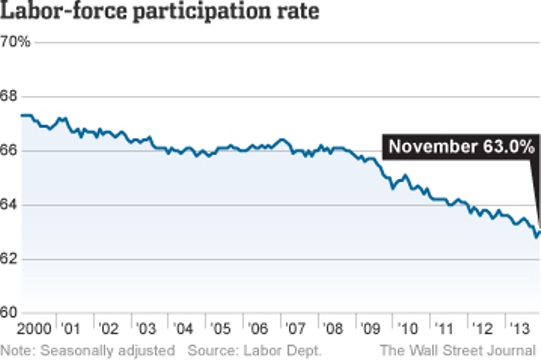 PEOPLE who trade in oil, other commodities and equities don’t buy that many chemicals and polymers because, of course, relative to the US population as a whole, they number very few.

Thus, the challenge for 2014, as President Obama talks about a “breakthrough year” for the US economy, is spreading the strength in commodity and equity markets to the vast majority of Americans.

Christine Lagarde, in announcing that the IMF had upgraded its forecast for US growth in 2014, conceded that income inequality was an issue. Income inequality is historically bad.

We have been here before. For the last five Decembers, we have been hearing that the following year would be a breakthrough year, when the US economy would finally free itself from the impact of the global financial crisis.

Maybe this time will be different, but we think there is a very good chance that 2014 will again disappoint on any reasonable broader measure of prosperity and, therefore, sustainable growth.

Whilst US unemployment has been declining, the workforce participation rate has yet to really improve (see the above chart).

Workers, discouraged by the reluctance of companies to hire people because of the demographic impact on demand, have taken themselves out of the workforce and so have disappeared from the percentage estimates of unemployment.

Another factor behind the shrinking workforce participation rate is the ageingof the Babyboomers. Some 10,000 Boomers are retiring in the US every single day and so, obviously, participation of the overall population in the workforce is on the decline.

A new research paper – released by the IMF and written by Fed economists – claims that, whilst it is going to take some time to fix the participation-rate problem, the US will eventually get there. The key, the authors argue, is more ultra-loose monetary policy that will eventually drive the headline unemployment rate down to 5-6% (it stood at 7% in November). At this level, they think that discouraged workers will flood back into the workforce.

But perhaps these discouraged workers will be mainly people like Tom Palome, who is profiled in this Bloomberg article.

The former five figure-salaried executive, who is 77-years- old, holds down two jobs – one of which pays him less in a week than he used to earn in an hour.

One of the reasons is the hole in the pensions system created by the flood of Babyboomer retirees, compounded by the loss of savings many people suffered as a result of the global financial crisis.

A further factor is employment policies for older people (see our later comments).

And you cannot turn 65-year-olds into 30-year-olds. As people age, as Tom’s story illustrates, they have less money to spend – and so, of course, they spend less on consumer goods. This means weaker demand for chemicals and polymers – unless we do something more to address the problem than just ultra-loose monetary policy.

Interestingly, back in 2007, some other people at the Fed, in this research paper, had a very different view of what was needed to turn the US economy around.  They warned that unless the retirement age for all workers was raised by two years, or they saved more money, per capita consumption would fall by 4% to 14% below what it would be if the country’s demographic profile had not changed.

But since late 2008, the Fed been trying to get people to spend more rather than less money through its ultra-loose monetary policies. Confused? We are….

Sadly,  also, the US has done very little to address the pressing need to get people to work longer.

As Bloomberg writes in this second article on the demographic challenge as a whole:

In 1983, the US Congress passed legislation increasing the retirement age for full Social Security benefits.

The changes were modest: Those who were 45 years old had to wait two months past their 65th birthdays to begin receiving Social Security. Those born in 1960 or subsequent years, who were just entering the labour force when the legislation passed, must wait until age 67.

We also think that more could be done to get employers to take on older people and provide them with more meaningful and financially rewarding work than flipping burgers and demonstrating food, which is what Tom has to do to earn enough to afford a reasonable lifestyle.

Showing tremendous determination, Tom applied for around 100 jobs and often reached the point of being asked “when can you start?” But he was then told the positions were no longer available when he had submitted copies of his driving license, which, of course, revealed his age.

And we also believe that manufacturers, including those who make chemicals and polymers, could do a lot more to provide the type of goods that older people will want to buy.

We shall return to both of these themes in a lot more detail in the New Year.

In short here, though, we worry that the policy and corporate frameworks to get the US back on track are not in place yet.

New political thinking – and a new approach by the chemicals and other industries -is needed before the States can truly enjoy a “breakthrough year”.

PREVIOUS POST China's Latest Credit Crunch: What It Says About 2014
NEXT POST 3D Printing Likely To Change Just About Everything