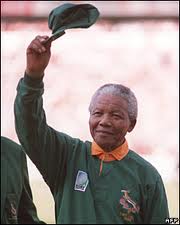 He got it, he understood it and in a fractious, self-interested world his self-sacrifice for his nation, his forgiveness for people who were once his enemies, was amazing after 27 years in prison. If many of the rest of us were wrongfully imprisoned for one day, we might well struggle to forgive our captors.

The world needs many more of his type of politician.

And so we are deeply saddened by the death of Nelson Mandela this morning. Rest in peace, Nelson.

The picture on the left was a great symbol of the essence of the man – wearing a Springboks shirt at the time of South Africa’s victory in the World Cup in 1995.