US Housing: The Demand Conundrum 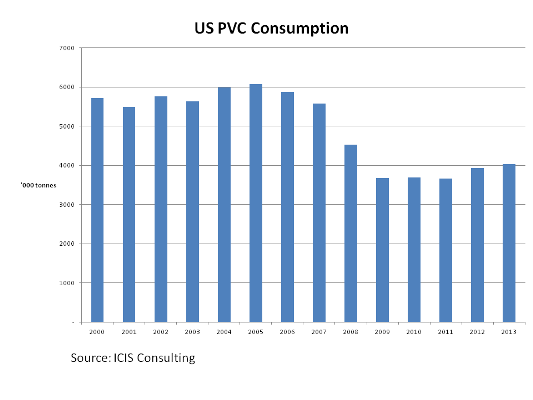 WEALTHY people don’t buy most of the world’s chemicals and polymers production because there are not that many wealthy people in the world – especially in the US these days.

The Economist, in it’s the World In 2014 magazine, writes of the US economy:  “Much of the growth in GDP has gone to profits, not wages, reflecting the weak bargaining position of workers.

“Higher energy prices have eaten away at real incomes. Most important, over time real wages track productivity and that, too, is weak. This can be traced to lacklustre business investment. After an initial bounce back early in the recovery, it has stabilised at a little over 12% of GDP, well below the 13.5% peak of the previous cycle, which was itself below the 14.5% peak of the 1990s cycle.

“The parsimony is puzzling: interest rates are at, or near, record lows, and profit margins near all-time highs. “

The Economist then tries to solve the puzzle by suggesting that slowdowns in innovation and productivity growth are behind the reluctance of companies to invest in hiring and in new capacity.

It is then a great deal more equivocal then President Obama, who is convinced that 2014 will be a “breakthrough year” for the US economy when it writes: “Businesses may be waiting for demand to strengthen (something of a chicken-and-egg problem) or for policymakers to stop shooting the economy in the foot. With luck, 2014 will be the year that happens.”

Regular readers of the blog will  hardly be surprised by our answer to the puzzle posed by The Economist: Demographics. This is why we worry that 2014 will not – cannot – be a breakthrough year by any meaningful measures of broad economy growth, unless there is nothing short of a government policy revolution.

Such a revolution seems unlikely as the problem of demographics hasn’t even been adequately recognised yet at the highest levels of government. This is a great pity because, back in 2007, the Fed was on the right track.

The housing market serves as an example of why the long-term demand potential for the US economy might have weakened by demographics.

This year, the number of housing starts has surprised just about every forecaster on the upside and is expected to total 1.09m but will still be a long way off the peak. At the height of the sub-prime boom, and in the midst of the Babyboomers demographic dividend, housing starts totalled 2.2m per year.

A question for 2014 is: How much further can US housing demand rise?

We are with fellow blogger Paul Hodges in thinking that the further upside potential is very limited because of affordability issues driven by the ageing population.

“Thirty six per cent of young adults in the 18-31 year-old range are still living with their parents for affordability reasons,” he writes in this 2 October 2013 blog post.

“Their unemployment rate is double the national rate of 7.3%, whilst those with degrees find it difficult to save for a deposit due to high levels of student debt.

“This is adding to the decline in household formation.  It peaked in the late 1980s, as the Boomers set up home.  But the false boom of the sub-prime period has now disappeared, with levels now below 1m/year.  Instead, home ownership rates have now moved into long-term decline.”

Paul also makes the point that a lot of the recent recovery in house prices has been investor-led, with half of all homes purchased for cash.

“Since mid-2010 all-cash purchases, mostly by investors like the Blackstone Group, have made up 30% of all existing home sales, according to the Realtors’ association. That’s more than three times its historical norm. That may prevent house prices from plummeting, but it’s of little comfort to the average buyer,” adds Daniel Indiviglio, Washington columnist for Reuters Breakingviews, in this 24 December article

This suggests to us that all the cheap money pumped into the economy by the Fed has mainly gone to the small, rich elite at the top of American society – because the fundamental problems with demand are not being addressed.

And so what of the housing market in 2014? The Reuters columnist warns that regulatory changes by Washington, along with the expectation of higher interest rates as expectations of further Fed tapering increase, will dampen demand.

The problem, we think, is that unless chemicals and other companies go back to the the drawing board and devise more products and services based on age ranges and income levels, demand for housing and every other consumer product could well remain well below peak levels.

It is worth noting, again drawing on data from Paul’s October blog post, that each new house is worth $15,000 of sales according to the American Chemistry Council, making today’s market worth only $14bn compared to its $33bn peak. This reflected in US polyvinyl chloride (PVC) demand, which remains below peak levels (see the above chart).

Government support for manufacturing and service-industry development, through, say tax breaks and other investment incentives, would be a big help. This would help create the right kind of employment opportunities, both in terms of higher salaries and meaningful work, for the vast bulk of the US population outside the small, rich elite.

But for US petrochemicals companies, which are planning some 25m tonnes/year of ethylene investments based on very cheap ethane costs, the risks of not building capacity seem to be greater right now than going ahead with new cracker and derivatives plants.

The feedstock advantage is huge,  as colleague Nigel Davis, in another of his excellent Insight articles,  points out when he writes:

“Ethane costs currently are low and have become disconnected from oil and from prices generally in the petrochemical markets.

“Some adjustment back towards the historical 6:1 to 9:1 energy equivalent ratio between the WTI oil price and the Henry Hub benchmark natural gas price – and hence, relatively, the ethane price in the US – might be expected. The ratio now is a remarkable 20:1 to 25:1.”

Where will all the extra petrochemicals output go?

PREVIOUS POST China's Debts: Close Your Eyes, Hope For The Best
NEXT POST Gas, Gas, And Perhaps Even More Gas