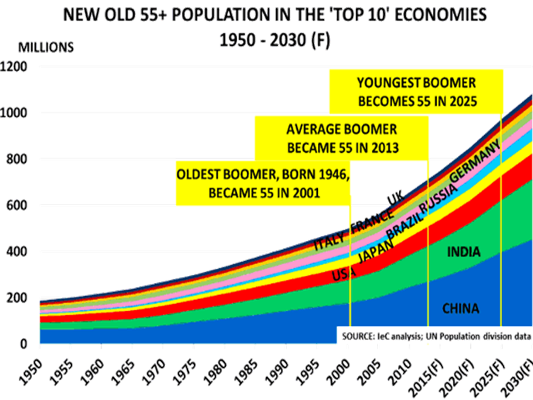 IT was Milton Friedman who famously said “inflation is always and everywhere a monetary problem”.

This widely accepted economic wisdom is based on the following premise: Excessive expansion of the money supply is inherently inflationary.

And so one can still argue that all that central banks have to do is to keep on expanding the money supply, and, hey presto, we will inflate our debt away  – and also create a desire amongst consumers to buy today rather than tomorrow because prices are rising.

But could there have been something else behind inflation during the Supercycle era?  Might it have also been favourable  demographics that played a big role in demand being in excess of supply, which is, of course, inflationary? Friedman‘s theory might need updating, argues fellow blogger Paul Hodges.

He points out in this Financial Times FT Data blog post:

And so calls for even more central bank stimulus every time growth disappoints seem to be misplaced, as you are not addressing the underlying problem. This is the need to refocus the global economy towards the requirements of the 55+ generation. Until that problem is addressed, deflation will be the challenge rather than inflation.

A call for more Bank of Japan money printing was made last week, when Japan’s fourth quarter GDP growth disappointed many analysts.

Similar calls are being made in Europe where deflation beckons. The ECB is being urged to extend its stimulus into unconventional areas such as purchases of foreign and corporate bonds, bank bonds or even company shares.

China is the only country that seems to have worked out that Friedman’s rule might need adapting to something like “inflation can be both a monetary and demographic phenomena”.

We have spent a lot of time warning about the risks ahead for China over the next few years as it retools its economy. But at least it has a plan. It is sensibly cutting back on stimulus, whilst raising the quality  its manufacturing and services in order to compensate for higher wage costs that are the result of its ageing population. This sets it favourably apart from the West.

PREVIOUS POST China Markets And Commentators In Denial
NEXT POST China: "Just When I Thought I Was Out...."