China Markets And Commentators In Denial 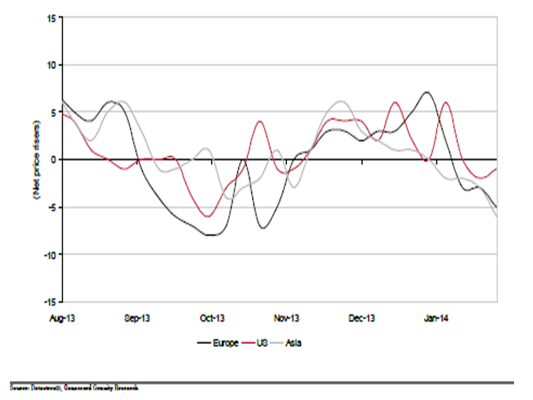 SOME chemical market players remain in denial or have yet to grasp the real problem in China, as is the case with quite a few financial journalists.

But what if the weak PMI reflects the most important, and largely overlooked, issue in China’s economy today – CREDIT AVAILABILITY? We make no apologies for repeating ourselves and we will continue to do so until or unless we start seeing that the consensus view has shifted. We owe this to our contacts and friends in the chemicals industry as we want them to be prepared for the potential downside.

As reminder, this is why credit is so pivotal to understanding what’s going on in China today:

Last week, a broad range of chemicals and polymers pricing were in retreat in China, according to assessments made by ICIS pricing. Declines occurred in, for instance,  acrlyonitrile butadiene styrene (ABS) polyethylene (PE), polypropylene (PP), purified terephthalic acid (PTA) and mono-ethylene glycol (MEG).

It is good news that some of us are already with us on the view that credit availability is the thing that needs to be measured if we are to accurately assess the outlook for chemicals and polymers markets.

“In our view, the apparent demand weakness, though unwelcome, is not particularly surprising, given what we see as structurally poor demand fundamentals in major markets,” wrote Paul Satchell, UK-based chemicals analyst with investment bank Canaccord Genuity, in reference to global chemicals markets.

“Adding concerns over credit availability in China (where chemicals purchasers are typically small-and-mediums-sized enterprises rather than state-owned enterprises) to fragile demand elsewhere in Asia and Europe makes for an uncertain outlook for at least the next few months.”

Paul made this comments in his February Chemicals Volume Proxy report. This leading indicator gauges volumes, and thus demand, through weekly changes in 33 spot chemical prices in the US, Europe and Asia, as assessed by ICIS.

“The Volume Proxy has continued to weaken after Lunar New Year, he added [see the above chart that shows global declines, which have been led by China].

“Following an unusually insipid start to 2014, we see this as a very bearish signal. Post-New Year weakness would typically mean that purchasers entered the holiday period with excess inventory, or that underlying demand is weak,” said Paul.

“Given the soft early January, we find the excess inventory argument improbable. On that basis, poor demand fundamentals look to be the more likely explanation.”

And why is demand poor? Because its strength in China over the last five years has largely been the result of EXCESSIVE CREDIT CREATION.