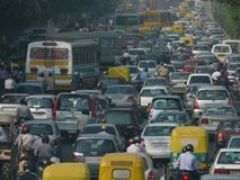 IF you are convinced of the accuracy of Indian government air-quality readings, then air pollution in Delhi is nowhere near as bad as that in Beijing – despite a New York Times report to the contrary.

Government measurements, published in response to the NYT article, show that the concentration of harmful particulates less than 2.5 micrometres in diameter (PM 2.5) never crossed 250 per cubic metre during the first three weeks of this year. This compares with the estimate published in the NYT of 473 micrograms per cubic metre, which was based on analysis by other experts.

Respectfully, we think that that this might miss the point. The point should be “how do we tackle this problem?” as, even by the official measurements, the air quality in Delhi was still TEN times above the World Health Organisation’s safe limit.

We hope we are being unfair here and that there are already effective Indian government policies in place to tackle this issue – not just n Delhi, but also across the whole country.

The NYT report is backed up by the latest global Environmental Performance Index (EPI).

The EPI is produced by researchers at Yale and Columbia universities, in collaboration with the World Economic Forum, and covers environmental problems in general.

Asthma and other respiratory ailments affect two in five Delhi residents, according to the International Harvard Review.

We suspect that something could be amiss with Indian government policies because, according to the NYT article:

In China, the “sandwich generation” is exerting enormous pressure on the government to clean-up the environment. The government seems to be responding, as this generation cannot be allowed to vote with its feet by leaving China. It has to be persuaded to stay if China is to escape the middle-income trap.

The problem for India is that, unlike China, it hasn’t received the same “payback” for environmental degradation. China has many more millions of jobs in manufacturing.

And so the $64,000 question question has to be:  How does India unlock its growth potential in a sustainable way,  given that the “old fashioned” approach to industrialisation would surely make pollution a lot worse?