Global Debt At Unsustainable Levels As We Wait For Trigger Factor 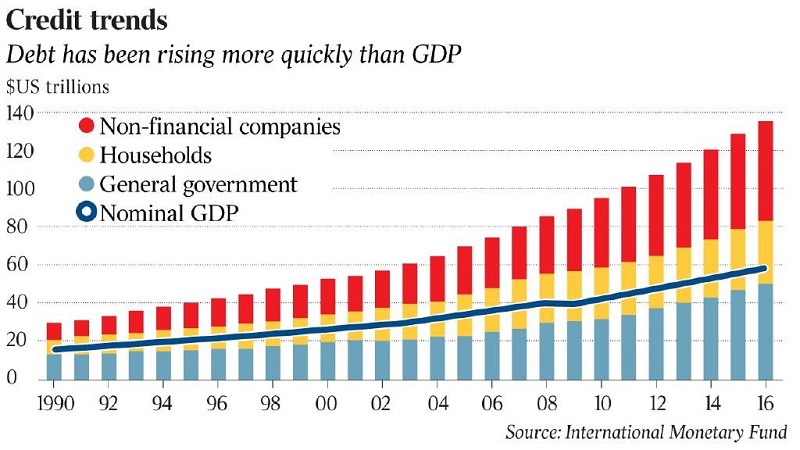 THE whole point about debt is that it should be sustainable. You should only lend or borrower money if you are entirely convinced that future economic conditions – i.e. future demand – justify your commitments.

Nice theory, shame about the practice. If lenders and borrowers badly misjudge future real demand then we end up in a lot of trouble. Take as evidence the Global Financial Crisis (GFC) when lenders were falling over themselves to lend money for home purchases to customers with quite often non-existent credit histories.

This worked out just fine as long as US house prices kept on rising. But they didn’t. They instead started falling. The rest is of course very well understood history.

Have we learnt anything from the GFC? I am not convinced that we have. The above chart from the IMF shows the rise in G20 country debt against increases in GDP since 1990. Over the last ten years, there has been an 80% increase in G20 debt ($60 trillion of extra debt) – way ahead of GDP growth – to a total of $135 trillion.

But as fellow blogger Paul Hodge writes, the IMF has consistently overestimated global growth. For example, it had forecast in 2011 that 2016 global growth would be 4.7%, but it was a third lower at just 3.2%.

And these increases in IMF estimates of GDP growth for 2017 and 2018 – presuming that they turn out to be accurate – cannot be described as anything but mild upticks.

This is despite the trillions of dollars of economic stimulus spent by the world’s central banks since the GFC, and despite their policy of keeping interest rates lower for longer than during any other period in economic history.

In other words, you can make a strong case that history has repeated itself: Debt has again been built up to levels not justified by future demand.

I believe that the main is that this stimulus was never going to address the rarely discussed challenge of the retirement of the Babyboomers.

Ageing populations mean people will spend less rather than more money in the future because a.) They already own most of the things they need, and b.) They are living on pensions and so on greatly reduced incomes.

Loss of growth momentum will also effect young people. Their economic opportunities will be reduced as long as policymakers fail to compensate for ageing populations. Future demand from working-age people will thus be lower than during the Economic Supercycle.

Add to this the disruptions being caused to the global economy by new technologies and I find it hard to see how post-2008 central bank stimulus has been a worthwhile investment.

For me, the clearest indication that this investment has largely failed is the reaction of the West’s economic “left behinds”, They are suffering the most from the loss of growth resulting from ageing populations and the loss of jobs from new technologies. They are as a result increasingly turning to populist political solutions.

If interest rates continue to rise on normalisation of central bank policy, the risk is that debts will become too expensive to service in an environment of weak real demand.

The scale of the potential problem is in some instances even greater than before the GFC. Take consumer debt in the US which is above 2008 levels – again according to the IMF.

Perhaps the Fed will reverse course. And perhaps the European Central Bank and the Bank of Japan will double down on their quantitative easing programmes.

We simply don’t know if China’s economic reforms will work as it tries to wean itself off the wrong kind of bank lending. It has spent more stimulus money since 2008 than the US, the EU, the UK and Japan put together. Much of that money has seemingly wasted on industrial overcapacity and empty apartments.

Will China also be able to resolve its environmental crisis which is nothing short of existential?

Like the West, China faces an ageing population sooner than would have been the case had it not been for its One Child Policy. It must therefore become a more innovative economy if it is going to justify higher wage costs resulting from a shrinking labour force.

China’s economic reforms are in jeopardy because of the political reaction of the West’s economic “left behinds”. Their preference for anti free-trade populist politicians threatens a global trade war during a period where China needs more, rather than less, global free trade.

Until or unless the concerns of the left behinds are addressed, it is hard to see anything but a continued threat to free trade from political populists. That threat could increase as more populists either win elections outright or gain increased influence in coalition governments.

Here is another outcome:

US stock markets may retreat when and if it becomes apparent that the White House isn’t going to achieve major corporate tax reforms. Big reforms seem to have been baked-in to today’s US market.

China might instead be the trigger factor over the 12 months if Xi, who will have strengthened his political position by the end of the current 19th National Party Congress, accelerates economic reforms at the cost of short term growth.

Or it could be a geopolitical crisis with North Korea or Iran than tips the balance. Or any other number of known or unknown factors.

Right now, all the talk in petrochemicals markets is of top of the cycle conditions. At times like this, there is always the risk of complacency and for companies to as a result not plan for a worst case set of scenarios.

PREVIOUS POST Next Polyethylene Downcycle: Risk That History Will Repeat Itself
NEXT POST Global Polypropylene In 2018-2025: What To Plan For