Next Polyethylene Downcycle: Risk That History Will Repeat Itself 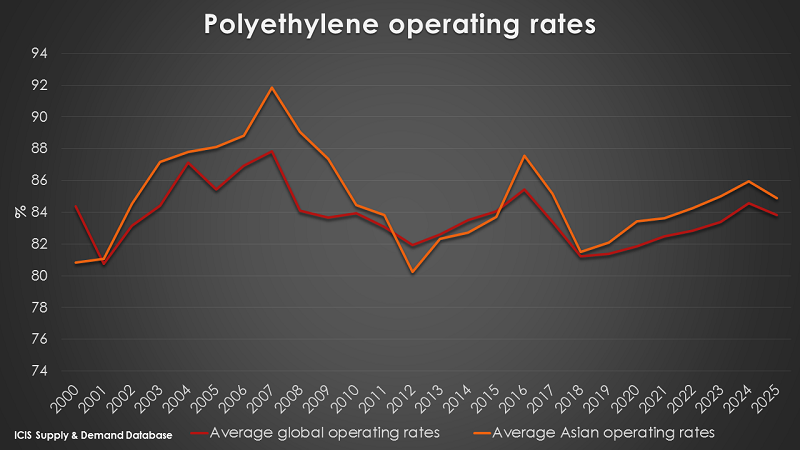 WE can break the history of the global polyethylene (PE) business so far this century into four major phases, thanks to the above chart, which was compiled with the help of our excellent Supply & Demand Database:

Will the future be different from the past? As I’ve just described, the last two major waves of new PE capacity arrived just as the global economy suffered big crises.

But our base assumes a solid global economy in 2008-2025 as an unprecedented wave of new US capacity arrives in the market. This makes perfect sense as a base case.

We see average global PE rates dipping to 81% in 2018 and 2019 as the first wave of new US capacity comes on-stream. Asian capacity utilisation will be 82% during those two years. Then we forecast a recovery in production before another dip begins in 2025 on the second wave of new US PE investments.

But any sensible scenario planning has to factor in the risk of these new capacities coinciding with weaker-than-expected global growth.

Risks include, of course, a slower China and a global trade war. And such a trade war might make it very difficult for the US to export its PE surpluses to China – the only market big enough to absorb these surpluses.

Another risk that I shall explore in a post next week is how the withdrawal of economic stimulus by central banks risks major debt repayment problems. The IMF estimates that record-low interest rates have resulted in a $60 trillion increase in the debts of the G20 countries over the last ten years. Debts have risen a lot faster than the rise in GDP.

It is thus possible to build a case for global and Asian PE operating rates being below 81-82% in 2018-2019. This would mean deeper trough conditions that any other point so far this century.

You can make the opposite argument of better-than-expected, rather than worse, global economic conditions. How would such as scenario, however, stand up to the constant drag on growth being caused by ageing populations in the West?  This in my view remains the biggest barely discussed issue.

On the other hand, though, PE growth in China might continue to surprise on the upside because of booming mobile internet sales. Hugely increased quantities of packaging material are being required, for the time being at least, for delivery of goods being bought via smartphones. It does seem as if the multiples of Chinese PE demand growth over GDP are climbing.

But which producers would benefit the most from this growth? Perhaps not those with big new plants in the US if geopolitical tensions between the US and countries within China’s One Belt,One Road (OBOR) region worsen.