How US Polyethylene Exports To China Could Come To A Halt 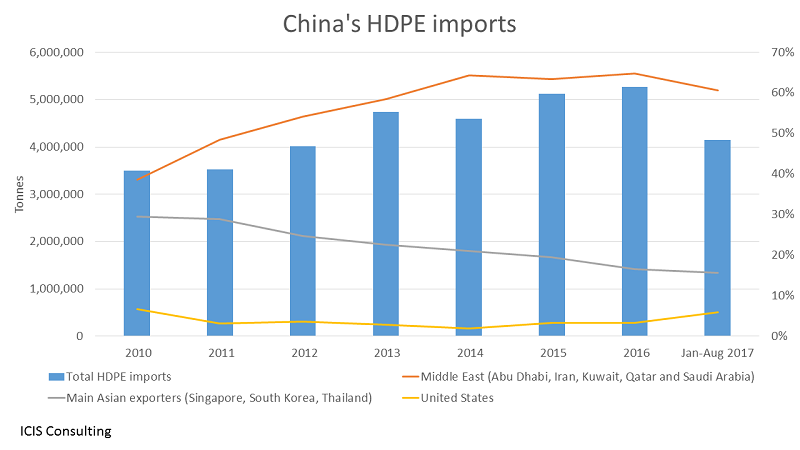 THE US has abundant shale gas reserves that have in effect been solidified into new polyethylene (PE) capacity, which is largely for export as this is a cheap way of shipping ethane.

If you subscribe to the standard view of how the world’s economy will behave over the next decade, growth will be sufficient to easily absorb all of these PE exports.

Sure, global operating rates will dip over the next few years. Everyone accepts that. But not to such low levels that we end up in a severely oversupplied market, is the widely adhered-to base case assumption.

What about profitability? The majority again agree that margins will slip. But they would have to fall by so much from today’s record highs that the feeling is, “Heh, so what? All of us will still be making lots and lots of money.”

Perhaps. But what about access to overseas markets for US exporters, most importantly of course the Chinese market? A lot will hinge on the trading and geopolitical relationship between the US and Chinese government.

President Trump’s decision not to re-certify the Iranian nuclear deal might push Iran closer to China.

This could lead to Chinese investments in raising operating rates at existing Iranian PE and plants, and eventually even in Chinese money being spent on new PE plant in Iran.

Iran could further raise its market share in China’s overall PE import. This would add to the gains that has it has already made during recent years.

Now let’s focus just on HDPE. The US is set to raise production by 24% between 2018 and 2025 with local demand only up by 10%, according to ICIS Consulting data. This would result in a 104% increase in exports. And yet, as the chart above shows:

• Between 2010 and January-August of this year, the US percentage share of Chinese imports has actually fallen from 7% to 6%, whereas the Middle East share has jumped from 39% to 61%. Meanwhile, the market share of the three biggest Asian exporters – Singapore, South Korea and Thailand – is down from 30% to 16%.

I don’t have a full set of data for linear-low density PE (LLDPE) trade for the year to date, hence my use of the HDPE chart above.

But in LLDPE, the potential risk for the US of less access to the Chinese market is even greater. Between 2018 and 2025, we expect production to jump by 67%, local consumption by 12% and exports by 321%.

And yet, based on the limited up-to-date Chinese trade data I have access to:

These US declines of course reflect that until now the US has seen its market share slip on lack of new capacity. This is a legacy of the pre-shale gas era when the US was constrained on ethane supply whereas the Middle East had plenty of low cost ethane.

If the Chinese market remains very much open to US exports then all could be fine. But what about the alternative scenario?

The US president will lead a US trade delegation to China on 8-10 November, including CEOs and senior executives from several US energy companies, according to Bloomberg.

Under discussion will be a proposed $7bn Sinopec/US joint venture comprising a 1,127-km pipeline from the Permian oil field in western Texas to the Gulf Coast and storage facilities.

China is short of oil whereas the US has big exploitable oil reserves – thanks again to the shale, or fracking, revolution. And the benefit for the US is that the Sinopec investment would reduce the politically very sensitive US trade deficit with China.

President Trump is expected to push the Chinese to buy more US liquefied natural gas exports during his visit, which could again be a win/win. The US has, as I said, big reserves of gas whereas China has very little domestic gas supply. China is eager to switch from coal to gas for electricity generation in order to tackle its chronic air pollution problems.

All a very neat fit, then? Perhaps. But whilst the mood music during the US presidential visit could be upbeat, will the Sinopec deal actually go ahead? As Bloomberg writes:

In September, the White House blocked the sale of US-based Lattice Semiconductor to a Chinese firm, citing national security concerns, and a month earlier, the President authorised an investigation into Chinese intellectual property theft.

Perhaps, though, the Sinopec deal can be sold to the President’s political base as in being keeping with his America First policy through the claim that it will bring jobs to hurricane-affected Texas.

But in a sign of the ongoing trade tensions between the US and China, the US on Friday announced a preliminary decision to impose heavy antidumping duties on Chinese imports of aluminium foil. Beijing claims that the duties are discriminatory and use a methodology that expired when China joined the World Trade Organisation in 2001.

The US versus or with China

And regardless of the outcome of President Trump’s latest visit to China, questions will remain about his underlying approach to diplomacy. As I discussed back in January:

My style of deal-making is quite simple and straightforward. I aim very high, and then I just keep pushing and pushing to get what I’m after. Sometimes I settle for less than I sought, but in most cases I still end up with what I want.

This has of course worked superbly well for Mr Trump in his business dealings. But in nation-to-nation dealings, neither side usually ends up with exactly what it wants. Both sides have to compromise. The reason is that no country’s leaders can go back to the people that they represent empty-handed. This is unless a country goes to war in a bid to get exactly what it ideally wants.

President Trump might decide to drop this approach and go for compromise in his dealings with China. How, though, would he sell this to his political base?

For those who don’t support the president, their light at the end of the tunnel is the possibility that he won’t win re-election in 2020.

Let’s assume this happens and that a.) Until then the US and China avoid a full-scale trade war, and b.) The president is replaced by a more conventional mainstream politician.

Would this mean that the trading and geopolitical relationship with China would become much more harmonious? Not necessarily because China’s economic rise would remain a challenge to the US as would its desire for greater geopolitical influence.

As I again discussed in January, China’s territorial claims around its Ten-Dash Line in the South China Sea are a major geopolitical threat.

And how would a more mainstream occupant of the White House react if today’s political direction in China continues?

As I said would probably happen, China’s president, Xi Jinping, cemented his position during the 19th National Party Congress which concluded last week. The Communist Party is now more firmly in control of China, along with the central government in Beijing.

How would this political direction fit with conventional US political thinking on human rights and democracy?

The future of US PE exports to China

Regardless of your views on President Trump – and, again, I must stress that none of this is meant to express an opinion either way – there is no doubt that his approach is unconventional.

China might thus feel that it is in a position where it faces a far more reliable and unpredictable US.

Plus, it could continue to eye an opportunity amidst this uncertainty of being the new champion of global free trade.

China, like the rest of us, has no idea whether President Trump will win re-election in 2020. It must plan for the possibility that he wins a second term, and that his America First policy eventually leads to a US-China trade war.

Equally, China has to worry about the potential lack of alignment with any new “more liberal” US president in 2020.

I therefore think it very likely that China will aggressively develop its One Belt, One Road (OBOR) vision, including ever greater petrochemicals self-sufficiency within the OBOR region.

In the short term, US PE producers might be able to win more market share in China because of the size of China’s likely PE deficits. But wherever possible, China could prioritise imports from fellow OBOR member countries.

As for the longer term, ever closer relationships between China and the Middle East has the potential to greatly reduce US PE exports to China. The Middle East is in the OBOR.

The potential seems greatest between China and Iran. China would get cheap oil and gas imports and Iran would get development of its petrochemicals sector.

China would then get imports of the petrochemicals in which it has deficits. The final win for Iran would be relocation of manufacturing plants from China that would help solve Iran’s chronic unemployment problem.

Singapore, Thailand and the rest of Southeast Asia (SEA) are also on the OBOR.

Think here of the RAPID project in Malaysia, which is a joint venture between Petronas and Saudi Aramco.

The $27bn refinery-petrochemicals project involves Aramco supplying 70% of the crude to the refinery, downstream of which will be LLDPE and HDPE plants. These crude supplies will bolster the viability of the project.

Could this be a template for future SEA/Middle East projects to help serve local economic development and Chinese import demand?

Might we, as a result, one day see the China market entirely closed to US PE exports?

PREVIOUS POST Global Polypropylene In 2018-2025: What To Plan For
NEXT POST China's Xi: Squaring Circle Of Poverty Alleviation, Environment