Asian Polyethylene Producers: What You Must Do Now $70 Crude Is More Likely 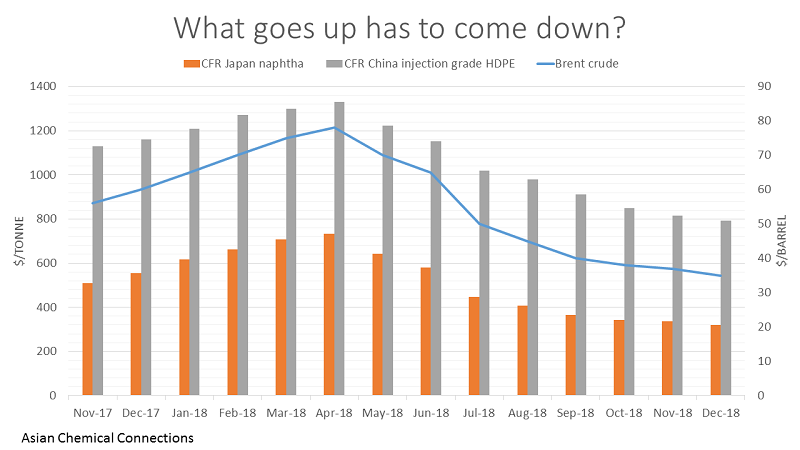 THE facts on the ground in global crude markets have shifted even further in just two days. Now it seems more likely that oil prices will rise to $70 a barrel or above in Q1 of next year, possibly even earlier.

What has changed are the ramifications of Saudi Arabia’s anti-corruption campaign. As John Kemp writes in this excellent Reuters article: The wave of arrests and ministerial changes in Saudi Arabia at the weekend has fundamentally transformed the structure of the state as it has existed since the 1960s. He adds that power now rests with one branch of the royal family.

Much of the increased power in that branch of the family is in the hands of Crown Prince Mohammed bin Salman.

The anti-corruption campaign he is leading is very popular with Saudi Arabia’s very youthful population. But now the prince has no other branches of the royal family to blame if things go wrong, so he might well have to keep a close eye on his popularity.

Kemp argues that the Crown Prince can underpin his popularity through quicker economic growth and improved job creation. Success in both these areas would be made a lot easier by higher oil prices, leading to increased government revenues.

The prince has already given his support to a proposal by OPEC to extend production cuts to end-2018 from March next year. Firmer Saudi backing for extending the cuts seems very probable.

Then there is the Saudi Aramco IPO which Saudi Arabia recently stressed would go ahead on schedule in 2018, despite reports of a delay until 2019. The higher the oil price, the greater the value of the IPO.

What also seems significant is that just before this weekend’s launch of Saudi Arabia’s anti-corruption campaign, the message from OPEC about what constituted are fair price for crude had changed, according to Bloomberg.

The wire service argued that back in May, OPEC members were talking of $50 a barrel as being a fair price for crude. In early October, Qatar’s oil minister said that prices were moving towards a fair level as Brent rose above $60/bbl.

And as I again discussed on Monday, the political uncertainty in Saudi Arabia created by the anti-corruption campaign could add to the upward pressure on crude prices.

But here is a crucial caveat: These are just very rough guides to help you with potential market direction. These numbers do not represent the kind of quantitative, in-depth data crunching provided by our ICIS Analytics and Consulting team. Contact us here for Brent, naphtha and PE pricing scenarios that you can plug in to your planning process.

My scenario for Brent crude prices

As you can see from the chart at the beginning of this blog post, I have Brent climbing to a 2018 high of $78 a barrel in April 2018 before it more than halves in price to $35 a barrel in December.

For the period from November of this year to December 2018, Brent would average just $56 a barrel, thanks to this precipitous decline in pricing. This would only be marginally up from the actual average price in January-October 2017 of $52 a barrel.

“Here he goes again about $35 a barrel crude,” you may well say.

But here’s the thing: For the reasons I discussed on Monday, I remain convinced that the underlying long- term fundamentals behind the crude market point to much lower, rather than higher, prices over the longer term.

One of the factors behind my view is the US shale-oil boom. If prices do indeed climb to more than $70 a barrel then US producers will be able to ramp-up production, hedge at these higher prices, and thus flood the market with cheap barrels.

Bloomberg, in its article on the changing mood at OPEC about what represents a fair price, also points out that to date Russia hasn’t given its support to a higher targeted price level.

Moscow is apparently worried about letting prices rise too far, and has suggested that $60 a barrel would be enough to justify ditching the output agreement.

Without Russian support for the extension of OPEC cuts, crude prices might fall. Russia, which is not in OPEC, produced more oil than Saudi Arabia in 2016.

The effect on naphtha costs

Most of the steam crackers in Asia are liquids steam crackers, as they run primarily on naphtha with quite often the flexibility to also crack liquefied petroleum gas. The higher the oil price, the higher the feedstock costs for most Asian cracker operators as naphtha is made from refining oil.

As you can again see from my chart, I have naphtha costs surging from an October average price of $511/tonne CFR Japan to a 2018 peak of $733/tonne CFR Japan in April next year.

How I estimated each month’s naphtha prices per tonne was to multiply the monthly Brent prices per barrel by between 8.9 and 9.2 times. This is in line with the multiples we expect for naphtha over Brent during the next 14 months. Historically, naphtha prices are a multiple over Brent of slightly below 8 and slightly above 9 times.

Back to that surge in naphtha costs. The cost of the primary Asian steam cracker feedstock would be at an average of $631/tonne CFR Japan in November 2017-April 2018. This would compared with an actual January-October 2017 average of $479/tonne CFR Japan.

My chart also shows the impact on CFR China injection grade HDPE prices. Using my estimates of spreads between naphtha costs and HDPE prices, I estimate that:

See below, in bold, three important takeaways as you plan for the potential rise in crude to more than $70 a barrel.

The increase in HDPE pricing in November 2017-April 2018 would run against usual seasonal trends. Pricing normally falls in November-January in Asia before picking in February.

But, under my scenario, plastic converters would be compelled to stock up on resin ahead of anticipated further PE prices increases, even if the demand from their customers was weak:

As I again said on Monday, cheap crude since 2014 has led to a major pick up in margins for Asia’s cracker-to-PE producers. The reason is that PE and co-product prices have held up very well as naphtha costs have fallen.

It is all about demographics

Events in Saudi Arabia underline my long-held view that demographics remain a mainly ignored driver of politics, society and economics.

The bold reforms being attempted in Saudi Arabia are largely because of its youthful population, just as in China its ageing population has led to a whole new economic growth model.

In the US, Donald Trump may well have not become president if it hadn’t been for the middle-class income squeezed resulting from the country’s ageing population.