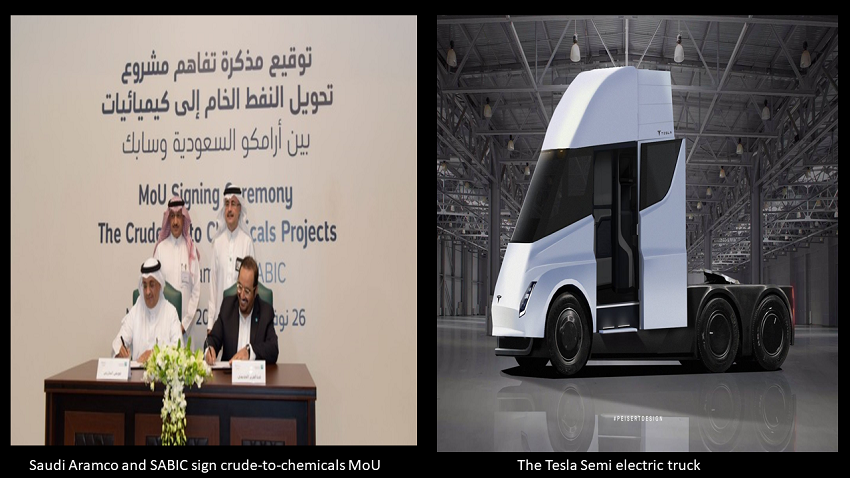 THERE is an important connection between this week’s announcement by Saudi Aramco and SABIC of an MoU for a direct oil-to-chemicals complex and the Tesla Semi electric truck, which is being trialled by DHL and other logistics companies.

To fully understand this link, let’s first consider the wider context behind the Tesla truck story. This story tells us is that it is not only the electrification of passenger vehicles that is a major threat to oil demand. Why not electrification of the transportation of goods as well?

Right now, conventional wisdom suggests that this won’t happen, resulting in the standard view of continued strong growth in diesel consumption. But today’s technologies never stand still. Just look at US shale oil and gas as an example that most of us can relate to.

And in general terms, one very likely scenario is where electrification of transportation in general follows an S curve. Improvements in the critically important battery technologies seem likely to reach a tipping point, as happened with hydraulic fracturing. Substitution will then speed up.

China will be crucial here. For environmental reasons, and because it needs to escape its middle-income trap, it is pouring vast sums of government money into developing local electric battery technologies.

And what about India, which is possibly tomorrow’s great economic hope? Given its terrible air pollution problems, it seems one-dimensional to only plan for gasoline and diesel being the dominant fuels feeding its growth in auto ownership.

Key to the successful electrification of the transportation sector is of course not just improvements in battery technologies. It is also the availability of low cost electricity that is environmentally sustainable.

If electricity is too expensive, and is generated by dirty old coal and considerably cleaner natural gas, then electrification of transportation cannot follow an S curve – even if the right breakthroughs in battery technology happen. Whilst coal is definitively awful for the environment, natural gas is better but is only a “bridging fuel” towards decarbonisation.

Is the bridge already being crossed because of the increasing economic efficiency of renewable electricity generation?  Very possibly, yes. As the International Energy Agency (IEA) writes in its 2017 World Energy Outlook:

This is based on today’s data. But it is again important when you are doing your scenario planning to think of the S curve. How much further might the cost of renewables fall? What will this mean for renewables replacing coal and natural gas in electricity generation?

As for sustainability, think again of India. The IEA says that India will be the biggest driver of global energy demand growth in general up until 2040.

How realistic is it that India can make use big use of its domestic coal reserves to satisfy this demand? In 2015, no less than 2.5m people died from pollution in India, according to The Lancet Commission on Pollution and Health. This was higher than any other country including even China where 1.8m people died.

Add many hundreds of thousands more to this number over the next few decades and this could negate India’s demographic dividend of a very youthful population. India might well face nothing short of a public health disaster.

India’s answer could be to make much greater use of renewables to generate electricity which will feed electric vehicles.  A clear sign of its intent in this direction is that it has set itself a target of generating 40% of its electricity from renewables by 2030.

Pollution isn’t the only issue for India. Think here of villages short of electricity because of the country’s poor electricity infrastructure. Local solar arrays seem like a cheap as well as a sustainable solution.

The risk of being forced to leave oil in the ground

The Aramco/SABIC MoU is for a chemicals complex at Yanbu on Saudi Arabia’s Red Sea coast. The complex would produce 9m tonnes/year of chemicals from 400,000 bbl/day of oil with completion set for 2020.

What could be part of the project is the Aramco/SABIC technology that allows crude oil, once it has been treated, to be fed directly into a steam cracker. As my ICIS colleague, John Baker, writes in this excellent article:

The process begins by feeding the crude oil into a hydrocracking unit which removes sulphur and shifts the crude’s boiling point curve significantly to lighter compounds.

The gas-oil and lighter compounds are then fed to a traditional steam cracker and the heavier products to a proprietary Aramco-developed deep fluid catalytic cracking unit that maximises olefin output.

Here is what might be some of the motives behind this proposed investment.

Saudi Arabia’s biggest national asset is of course its hydrocarbon reserves. But as we approach Peak Oil Demand – for the reasons described above, and because of today’s ageing populations – Saudi Arabia confronts the risk of being forced to leave much of its most valuable asset in the ground, for good.

What Aramco and SABIC  seem to be planning to do with this investment is bypass traditional oil refining as a hedge against the day when gasoline and diesel demand might collapse.

If it built a conventional refinery, the risk is that the fall in demand for transportation fuels would leave the refinery underutilised.  In other words oil would, as I said, be left in the ground for good. But turning oil directly into petrochemicals could help ensure continued development of the country’s oil reserves.

The project also fits in with Saudi Arabia’s Vision 2030, one of the main objectives of which is to create more employment for the country’s very youthful population. A means to this end is growth in industries downstream of oil production.

But as with all hedging strategies, there are many different approaches to the same challenge. The refining industry is obviously not going to collapse any time soon. Even if demand peaks for transportation fuels, existing steel on the ground will remain important to local economies. Hence, Saudi Arabia is also building new refinery-petrochemicals complexes in China to again lock-in consumption of its oil.

But what about the demand for petrochemicals?

How might the development of autonomous driving technologies reshape the demand for petrochemicals? If people hire autonomous rides when they need them, rather than own vehicles,  auto sales could collapse.

This is just one of the many unanswered questions about future demand growth in petrochemicals. So is the extent to which the move towards a Circular Economy will undermine petrochemicals consumption growth.

As we’ve just discussed, sustainability is a major driver behind major upheavals in transportation. There is no logic behind the view that petrochemicals will not be subject to the same pressures. Another S curve might apply here – the sudden take-off of legislation that prohibits the use of virgin polymers in some end-use applications.

This is clearly a challenge for Aramco and SABIC, and for all the other proponents of petrochemicals projects. You cannot just assume that turning oil directly into petrochemicals avoids the broader risk of a decarbonising world.

The answer is focusing petrochemicals production on where it creates real, lasting societal value – for example, less plastic mineral water bottles which are non-recyclable and more plastic piping and irrigation that can improve crop yields. In this way, companies can justify to legislators why they must retain their licenses to operate.