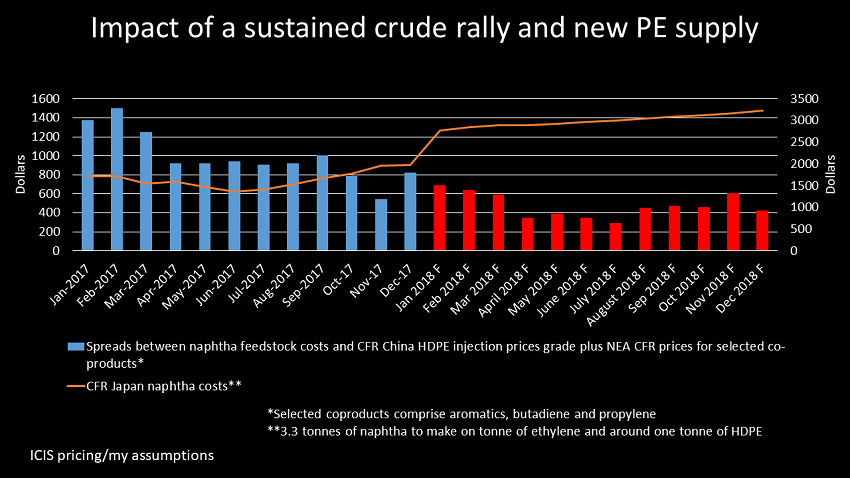 ASIAN naphtha cracker operators will see a 50% decline in average spreads, or differentials, between their raw-material costs and finished product prices in 2018 compared with last year, according to my forecasts in the above chart. This will be the result of a further steep rise in oil prices and increased polyethylene (PE) supply.

This is one of the many industry challenges I will be discussing next Monday – 29 January – during my free ICIS Asian Polyolefins Price Forecasting seminar. Click here to register.

Let’s start with some technical background and historical data before I explain my forecasts in detail.

Spreads of course don’t take into account costs of production. They are nevertheless a useful guide to the economic health of the Asian naphtha cracker industry.

So I have included CFR NEA prices for these co-products in my calculations times these multiples – along with prices per tonne for CFR China high-density polyethylene (HDPE) injection grade. Other co-products I have not included are fuel-oil and hydrogen.

Last year was a banner year for the Asian naphtha cracker business. PE demand growth in China was strong (how much was this recent strength PE inventory building though?) with Hurricane Harvey delaying the start-up of US new capacity. In Q1 2017, butadiene prices soared close to their 2011 record high. There was also a steady climb in propylene prices throughout 2017 as China-driven oversupply gradually eased.

The end-result were spreads between naphtha feedstock costs and HDPE and selected co-product prices at a 2017 average of $992/tonne. This compared with the 2000-2016 average of $665/tonne.  Asian low-density PE and linear-low density PE producers also saw record-high spreads in 2017.

But from July onwards, naphtha costs began to rise with the impact on spreads being felt from October until December. As usually happens when oil prices and so naphtha costs see rapid increases, cracker operators struggle to immediately pass-on their extra costs to PE, propylene, C4 olefins and aromatics buyers.

Between July and December, HDPE prices edged up by just 9% as naphtha costs rose by 40%. It was a similar story across all the other grades of PE. Aromatics, butadiene and propylene prices rose by between 11-20%.

In H2 of last year Brent crude prices rose by 33% and so I assume that in the first half of this year we will see another 33% rise. I then expect Brent to stay fairly stable in H2 2018 as rising geopolitical tensions will be offset by a fall in crude consumption. Consumption will fall because a pick-up in global inflation.

I multiplied the monthly price per barrel of Brent by between just below eight times and just above nine times to give me monthly prices per tonne of CFR Japan naphtha. Variations in the multiples were based on supply and demand conditions in the naphtha market.

This will be the result of rising geopolitical tensions and an extension of the OPEC production cuts at the next OPEC meeting June. Russia – the world’s biggest non-OPEC producer – will also maintain its production cutbacks. This is line with the reports earlier this week that Saudi Arabia and Russia plan to extend the cuts into 2019.

These are obviously very big increases on an annual basis, but are less so when measured against the closing months of 2017. And there is a good chance that today’s bull-run in oil markets will push prices much higher.

As for HDPE and co-product prices, I am predicting a similar struggle to pass-on extra naphtha costs as was the case in July-December 2017. HDPE will also be pressured by new supply as a result of the start-up of several new US ethane-based cracker-to-PE complexes. We are forecasting a 39% rise in US HDPE exports in 2018 over last year to 1.2m tonnes.

The end-result is that the 2018 average spread between naphtha feedstock costs and HDPE and co-product prices will fall to just $477/tonne –a 50% decline over 2018. This would also be the lowest average annual spread since 2001. LDPE and LLDPE spreads see similar declines under this scenario.

This is just one example of a range of scenarios I provide in my monthly ICIS PE and PP Price Forecasting Reports. The reports are thus an important support tool for your strategic planning.

I also, for example, model oil prices peaking by mid-2018 and then falling to below $40/bbl. This is also a viable scenario because of rising US shale oil supply and the potential for OPEC to reverse its cutbacks. Underlying demand growth for oi is also slowing as we approach Peak Oil Demand.

During the Webinar – again click here to register – I will also discuss:

I look forward to your questions in our Q&A session at the end of the presentation.