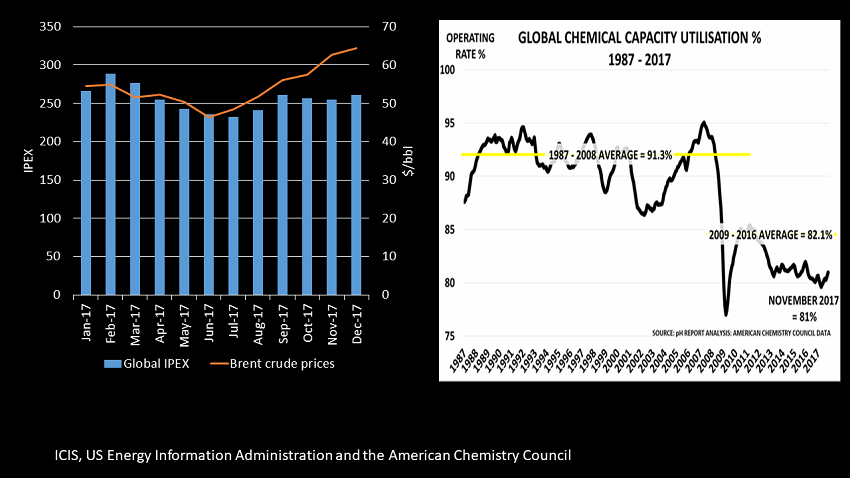 PETROCHEMICALS and polymers pricing power – how easily petrochemicals producers can pass-on higher oil prices to their customers – is a great measure of the strength of the overall global economy.

The reason is that petrochemicals are used to make a huge range of finished goods. In a booming economy, the pass-through of higher oil prices should be easy because a tight petrochemicals supply and demand reflects a strong economy.

The above chart, which compares the ICIS Global Petrochemical Index (IPEX)* with Brent crude prices in 2017, should therefore be a cause for concern. Between June and December of last year (it was from June that oil prices started rising), the IPEX rose by 11% whereas oil prices increased by 39%. Meanwhile, as oil prices rose so did of course naphtha feedstock costs. For example, in Asia, CFR Japan naphtha costs jumped by 45% in June-August 2017.

You might want to argue that this lag effect open happens when there is a sharp run-up in oil pricing. It always takes a long time for petrochemicals producers to fully transfer their extra costs to downstream customers. On the way down, also when oil prices are falling, petrochemicals producers tend to be able to maintain their prices longer than is really justified by the falls in crude. Both these dynamics have historically occurred, regardless of the strengths or weakness of the global economy.

In other words, those who believe we are in the midst of an unshakeable synchronised global economic recovery will look at the chart on the left and say, “just give it time”. Maybe in another five months petrochemicals pricing will have caught up with the rise in oil prices.

The latest data – for global chemicals capacity utilisation – was at just 81% in November, according to the American Chemistry Council. This was the second lowest November reading on record, and, as you can see from the above chart on the right, the 2009-2016 average operating rate was well below that for 1987-2008.

As petrochemicals and polymers are such a good barometer for the health of the overall economy, the message from both of these charts seems clear to me: The global recovery isn’t as strong as many people claim.

And, as I have discussed in a series of posts over the last two weeks, the recovery that has taken place is at risk of a downward correction. Reasons include a coordinated withdrawal  of western central bank monetary stimulus, anything between a moderate and sharp economic slowdown in China, and harmful levels of global inflation. Oil prices are obviously a major part of this inflationary threat.

PREVIOUS POST Struggling Polyethylene In 2018, Strong Profits Elsewhere
NEXT POST China Debt Crisis: Out Of Fashion, But Could Still Happen