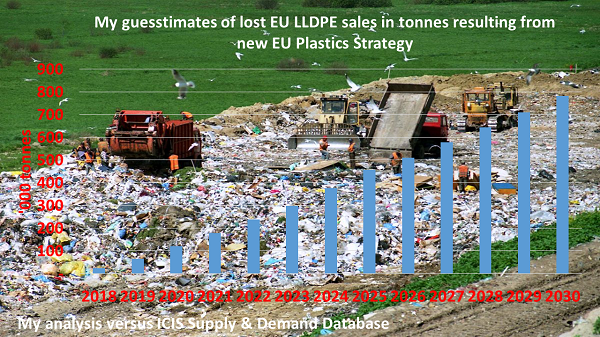 THE EU’s requirement that all plastics packaging must be recyclable by 2030 will result in billions of dollars in lost sales across the 28 members of the EU.

To give you an example, my preliminary guesstimate suggests that some €6bn of EU sales could be lost in LLDPE alone in the 12 years between 2018 and 2030.

This is based on sales being 5m tonnes lower than the base case in our Supply & Demand Database times €1,232/tonne – the average Northwest Europe price for LLDPE between January 2010 and January of this year.

Watch this space as our analytics team works on a final and proper estimate for lost EU LLDPE sales which may, of course, be lower or higher than my preliminary work.

But what is already clear is that in LLDPE alone billions of euros of sales are at risk. You then need to multiply this threat across all the polymers that go into plastics packaging in the EU.

Those with their heads stuck in the sand argue that for every lost tonne of polymer sales in the EU, two will be gained in the developing world.

They contend that because many millions of people in the developing world have yet to experience being able to afford modern-day consumer goods wrapped in plastic, the environmental pressures will not be the same.

Governments will focus on poverty alleviation and giving these people a taste of the Western lifestyle rather than on better recycling of plastics, they argue.

I disagree. As evidence builds about the damage being caused too aquatic life by plastic waste, developing countries will see this as another threat to their ability to feed themselves in a world where food security is already being challenged by climate change.

The damage to human health caused by plastic waste dumps will be another factor. Many people in the developing make a living from scavenging  plastic waste from landfills.

And here’s the thing: Few people predicted that the developing world, led by China and India, would get on board with the COP21 climate deal. But they obviously did. So why not plastics waste as well?

Specifically in the developing world, China will shock many people by the speed with which it tackles its plastic waste problem.

There as a historical precedent here, as China has already surprised the global recycling industry with its ban on imports of scrap, or recycled, plastic.

I strongly suspect that China’s next step will be to begin the process of building a state-of-the-art plastics recycling industry.

China’s recyclers very often have poor environmental standards and employ inefficient technologies. This is not in line with Beijing’s firm commitment to tackling its almost existential pollution crisis.

Neither does the economic condition of China’s recycling industry fit in with the country’s pressing need to move into higher-value manufacturing and services.

Moving up the manufacturing and services value chains has to happen if China is going to escape its middle-income trap. Escaping the trap is again almost existential for China. Failure would result in economic stagnation along with all the associated social and political disruptions.

A major legislative push to modernise China’s local recycling business is as a result very likely over the next one –to two years.

Those who argue for business as usual should also consider the legislation which has already been introduced. Way back in 2008, China banned free supermarket plastic bags and last June, Delhi banned the use of all disposable plastic.

In the past the polymers business was more straightforward because anything downstream of your palletisation plant did not have to be your concern.

The focus was instead on building ever-bigger plants anywhere in the world provided you had feedstock advantage, good logistics and sound polymer technologies etc.

This is no longer for these two reasons:

What tomorrow’s Winners must do is to work with plastic processors, retailers and the recycling industry to improve sustainability.

Let me give you just one example of where this innovation work could take place, which is in disposable coffee cups.

In the UK alone, 7m disposable coffee cups are used every day – 2.5bn per year. But because the way the cups are designed, the PE lining inside the cups is tightly bonded with the external cardboard layer.

This makes recycling economically unviable in all but 1% of the disposable coffee cups consumed in the UK.

And worse, the paper pulp used to make the cardboard is often virgin pulp. The UK government is therefore planning to force all disposable coffee cups to be recyclable by 2023.

PE producers could work down the manufacturing, retail  and recycling chains in an attempt to make disposable coffee cups recyclable.

This  work doesn’t have to be for free if it offers enough value. It can instead be a paid-for service packaging provided to plastic processors, retailers and recyclers.

Technically it could of course be the case that disposable coffee cups made from PE are a lost cause. Re-usable cups made from other polymers may in the end take their place.

This supports the general point that some applications could be lost entirely, whilst others can be saved.

Change is never easy. It is always hard to manage in any business. But this is a great opportunity for polymer companies to emerge as the Winners in this new demand environment by selling service packages.

To put this another way, if say your virgin resin sales fall from a million tonnes a year to 750,000 tonnes a year this doesn’t have to have any major negative financial implications.

You can replace the revenues lost from this 250,000 tonnes with fees charged to plastic processors, retailers and recyclers to help them meet new legislative requirements for sustainability. Brain power can replace production volume.

PREVIOUS POST In One Simple Chart: The Risk For Petchems From Crude
NEXT POST Petchems Face Major Inventory Risk As Economic Confidence Builds