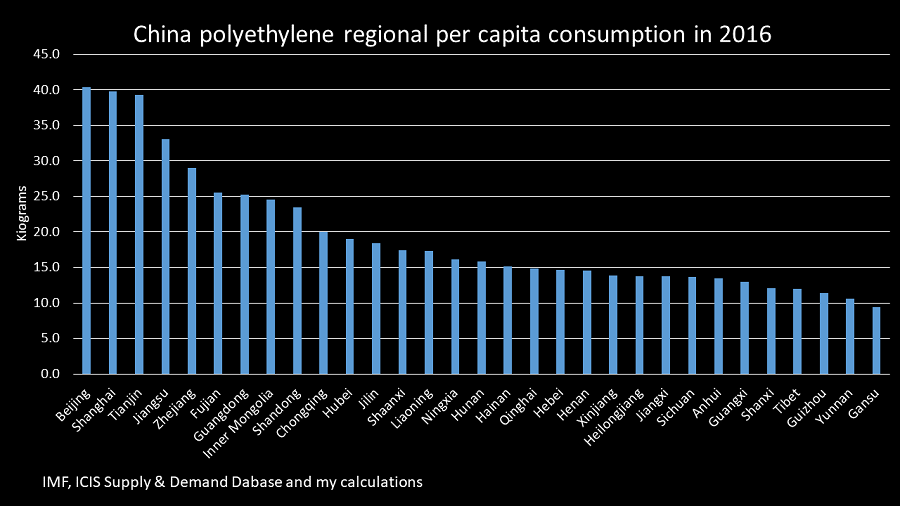 THE ABOVE CHART uses the same approach I used in late February for my post on per capita polypropylene consumption in China. In this case, my focus is on polyethylene (PE):

The standard way of viewing any developing country is that eventually its petrochemicals and polymers per capita consumption will peak and then only gradually increase or even decline. This is line with what’s happened in developed economies.

But China might turn out to be unique because it still has vast numbers of people who have yet to emerge from poverty. In its poorer provinces and regions we could thus see much more growth in consumption. This would result in average national per capita consumption continuing to grow at rates that we have historically never seen before.

Another reason why PE demand growth might defy history is the rapid expansion of mobile internet sales in China. Alibaba, Tencent and JD.com are leading the global way in sales via the internet.

All of these sales, from basic needs such as safe imported food to high-end luxury goods, need to be packaged. And a lot of that packaging can be PE. Further strong growth in the mobile internet economy seems inevitable.

But what will be the composition of growth in per capita consumption in China? To what extent will future growth be driven by virgin PE versus recycled PE?

Single-use PE is a crazy waste of value. China, like the rest of the world, is throwing away plastics of all types that can either be recycled or fed through pyrolysis units that convert the plastics back into oil or even naphtha.

A big problem for China is energy security as it has to import most of the oil, gas and naphtha because of its lack of local hydrocarbon reserves. If China can develop an efficient plastic waste collection and reprocessing system, making use of plastic rubbish in this way will improve energy security.

Or might PE per capita consumption actually decline. This will happen if PE loses market share to other packaging materials such as paper and aluminium.

What is certain is that the global pushback against the pollution caused by throwaway plastics will build and build, resulting in legislation that will threaten the ability of producers to produce. What we don’t know is how the PE industry will respond. Will it be innovative enough to prevent loss of market share to other packaging materials?

Another thing that is certain is this: China will become increasingly self-sufficient in PE through a combination of its rising domestic production and imports from fellow Belt and Road Initiative (BRI) countries. If you are outside the BRI you will lose out.

This means also need maps of global trade PE flows, which we can again provide you with, which are very different from the situation today. These maps will assume different levels of Chinese self-sufficiency via, as I said, both its own new capacity and new capacity within the BRI.

All of the maps, though, based on today’s political climate, are likely to include a barrier around China preventing imports of US PE.

PREVIOUS POST US Polyethylene: Even Without Trade War, $6.2bn Of Sales In China At Risk
NEXT POST China Shadow Lending Down By 70% With Deleveraging To Continue