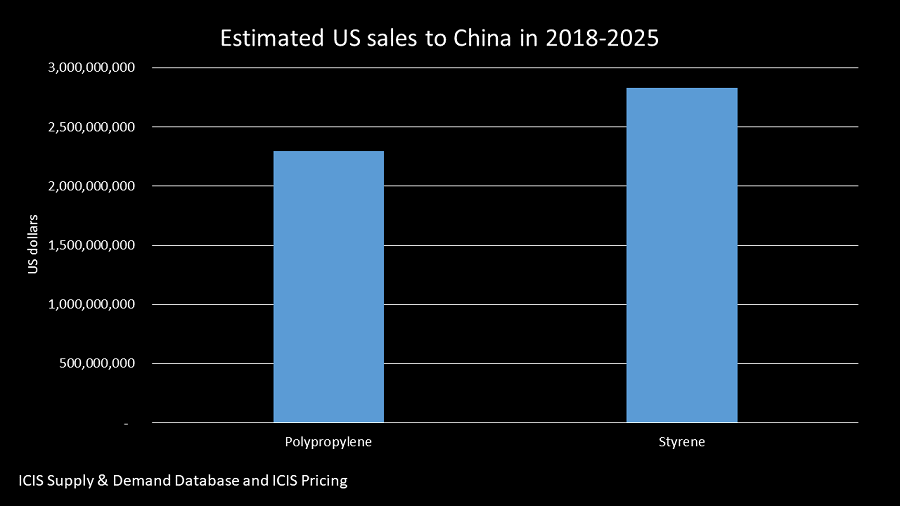 NOTHING that has happened over the last 24 hours should take you by surprise. Your petrochemicals company has had ample time to prepare for the US-China trade war that has now become a much stronger possibility following the US decision to impose $60bn of new tariffs on Chinese imports.

Shortly after President Trump was elected, I warned that the president’s “America First” policy promised a trade war.

I was told in conversations with some petrochemicals industry executives that I was wrong because “wiser heads” in the president’s team would prevail in steering the White House agenda away from protectionism. I agreed that that this was possible, but that because of the president’s long held views on trade, there was a risk that had to be prepared for where he would eventually implement his agenda.

In 2017 we got away with it. Despite a lot of rhetoric about more forthright measures to deal with the US trade deficit, nothing really happened.

But in January of this year, I flagged up an important turning point which was the release of the latest US National Security Strategy. This was the first time that the strategy has linked national security with economic security and is a clear victory for the protectionists within the White House.

Next of course came the US decision in early March to impose heavy new US import duties on steel and aluminium. At the time, some people missed the point as they looked at the minimal direct impact on the tariffs themselves because a.) Canada, Mexico and Australia were exempt, and b.) China no longer exports much steel and aluminium to the US.

But I warned that the basis upon which the tariffs were introduced – national security, which underlines the importance of the change in the National Security Strategy – risked opening a Pandora’s Box of likeminded actions by other countries. Because you cannot disprove that national security has been affected by imports, new tariffs introduced on this basis are hard to challenge before the World Trade Organisation.

I also warned that a much bigger deal lay just a few weeks away, which was a decision over whether or not the US would penalise China for allegations for intellectual property rights theft.

Now that decision has been taken with the imposition of the $60bn new tariffs on Chinese goods. A list of affected products, which will be subject to tariffs of 25%, will be released in 15 days. The US has also said that it will announce new restrictions on Chinese acquisitions of US companies with 60 days.

Commentators are talking of a “measured response” from China. Will this turn out to be overly complacent or near to the truth? Hopefully, the former, but petrochemicals companies MUST, if they haven’t already, plan for a worst-case outcome. This would involve not only a US-China trade war, but a global trade war as other countries get dragged in.

A sign of just how serious this risk has become is that within hours of the US announcement, China responded with an announcement that 128 US exports will be the subject of new Chinese import tariffs ranging between 15% and 20%. These imports are valued at around $3bn per year. Products affected include steel pipes, fresh fruit and wine, pork and recycled aluminium (note that I haven’t been able to find a full list of products affected and so whether any petrochemicals are affected. But watch this space).

President Trump’s supporters will argue that closed-door negotiations with China have over many years failed to get China to adhere to international rules on intellectual property. They believe that this more direct approach will win concessions from China. Perhaps that’s right and again I am not going to make any comment on the rights or wrongs of the president’s approach. This is not my role.

My job is to instead advise on the level of risk. I’ve been arguing since the president’s election that you have to plan for the risk of a trade war, simply because the president’s agenda is radically different from that of every other occupant of the Oval Office since the Second World War. With anything radically different always comes greater risks.

I have also stressed the key role of China’s ageing population in this issue, which is a subject far-too rarely discussed:

Two scenarios for what happens next

Scenario 1 is the worst case, where tit-for-trade trade protectionist measures between the US and China accelerate. The rest of the world also gets dragged into a trade war as other countries respond to further US trade protectionism that doesn’t just affect China.

The global economic impact of a global trade war has been modelled by economists at the Australian National University. Their worst-case scenario, of all major countries and regions raising tariffs by 10%, sees US GDP growth in the first year falling 1.3%. Euro Area growth would shrink by 2.9% and Chinese GDP would be 4.3% lower. This would  amount to a global recession.

Scenario 2, which is obviously the one that we all hope for, is that trade tensions simmer down. But China would still press ahead with its Belt and Road Initiative (BRI) because of the risk that tensions would boil over again. The BRI promises to create the biggest free trade zone the world has ever seen, surpassing that of the EU. If fully implemented it would involve 70 countries and some 40% of global GDP.

China would become self-sufficient in all its major imports needs, including oil, gas and petrochemicals, within this new free-trade zones. This would be at the expense of the US as it is outside the BRI and because of its protectionist approach to international trade.

Even regions and countries not in the BRI would have to take sides, deciding whether to align themselves with China or the US. China might seek to get closer to non-BRI members, such as most of the EU countries and Japan, in order to get access to the intellectual property it can no longer access from the US.

The US could as a result find itself economically isolated from China whether or not a trade war happens.

The direct impact on petrochemicals

In Scenario 1, the US will struggle to export its increasing production of polyethylene (PE) to the China market, just as the US ramps up capacity.

Based on numbers that are bound to be wrong, I estimated that US PE sales to China will be $6.2bn in 2018-2025 – the period when US capacity, and so exports, will dramatically increase. This ballpark estimate gives you a rough idea of the scale of what is at stake.

I have also estimated that major global US petrochemicals exports were worth $12.5bn in 2017. This again only gives you an approximate feel for the scale of the financial risk if there is a global trade war.

Two more examples of the longer term risk in China for US petrochemicals and polymers are contained in the charts at the beginning of this blog post.

In 2017, the US exported 152,194 tonnes of polypropylene (PP) to China – 3% of China’s total imports. Let’s assume that over the next seven years, China maintains a 3% share of the Chinese import market. This would amount to $2.3bn of sales.

This is based on our ICIS Supply & Demand Database estimate of Chinese PP imports in 2018-2025 and the average CFR China PP price for all homopolymer and copolymer grades between January 2017 and February of this year. The pricing data is from our excellent ICIS Pricing service.

The US exported 305,706 tonnes of styrene to China last year, which was 10% of China’s total imports. Again assuming that China maintains this market share in 2018-2025 – and assuming that average CFR Northeast Asia styrene prices in January 2017-February 2018 prevail throughout this period – this amounts to $2.8bn of revenue.

Even in the worst case scenario of a global trade war, US petrochemicals exports to China might not be directly targeted. But wherever possible, Chinese buyers and traders may want to stay clear of US product because of the risk that tariffs could be suddenly imposed.

And/or as the Global Times, the Chinese government-backed newspaper, writes in an editorial following the US decision on Chinese tariffs:  China’s society is highly united, and this will be reflected in its actions as the trade war comes into effect.

The THAAD missile dispute between China and South Korea in 2017 led to a sharp fall in South Korean imports as Chinese consumers avoided South Korean goods. The same thing could happen to all US exports to China.

Plus, of course, US petrochemicals may end up being directly targeted. Who really knows what would be the outcome of Scenario 1? This is again why you need to get your planning place.

In Scenario 2, it would be “drip, drip, drip” effect. China would seek to source more and of its imports from the BRI, resulting in a gradual decline in US access to the key China market.