Why China Can Become Major Polypropylene Exporter By 2025 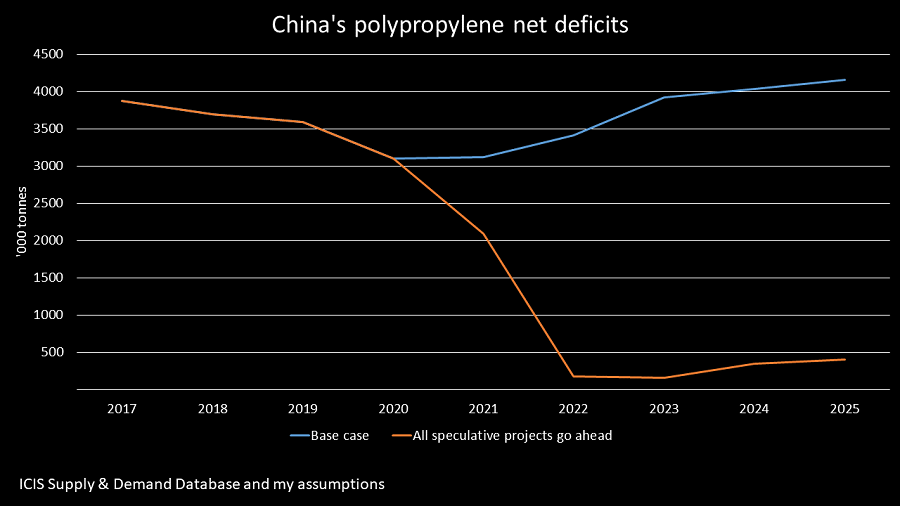 ONE of the main topics of debate in the global polypropylene (PP) business is whether or not China will become entirely self-sufficient. The pessimists, or rather I would say the realists, go a step further. They believe that there is every chance that China will become a significant exporter.

The final result will very obviously of course depend on how rapidly Chinese PP demand continues to grow versus its local capacity additions.

Demand growth to slow down

There is a scenario where rather than per capita consumption peaking in China – as has been the case in developed economies – per person average consumption continues to rise beyond what the world has ever seen before.

Between 2001 and 2017, China’s per capita consumption rose from 4.3 kilograms to 18.7 kilograms. But if you examine 2016 average income data across all of China’s 32 administrative regions, and then use this to estimate per capita PP consumption in each of these regions, the disparities are huge. In first place is the Beijing region at 38 kilograms and in last place Gangsu at 9 kilograms.

Xi Jinping, China’s president, has three long term top priorities. They are – in no order of importance as they are all equally important – deleveraging, cleaning up the environment and narrowing the huge coastal-inland income gap.

There will thus be an awful lot more money pouring into inland, or western, China over the next decade. This will be used to further improve infrastructure so inland China can better connect to the Belt and Road initiative. This will enable it to a.) Export manufactured goods more economically around China, and b.) Export manufacturing to overseas countries via vastly improved road and rail links.

Money will also be invested in creating more manufacturing jobs in the inland region. Take Henan province as an example where no less than 17 factories were built in just one year in the time it would normally take to build one factory, according to one local entrepreneur.

Many factories in low value manufacturing are being relocated to the west from the coast, where labour costs have become too high. This will help to boost inland income levels and thus consumption of PP and other petrochemicals and polymers. Apart from tackling income inequality, the Chinese government has another reason to boost jobs growth in western China and that is food security.

As the fascinating FT article I have linked to above describes, rural areas have become so depopulated because of the population drift to the coast that farmland is being left uncultivated. This is threatening food security. Maintaining a high level of food security is major government objective. Work shifts at newly-built factories are being arranged so that workers have time to cultivate their family or village-owned strips of farmland.

The optimists contend that this means the sky is the limit for PP demand growth in China, and that China will as a result never realistically be able to keep up with supply. On demand, I disagree for two reasons:

A gradual percentage decline in PP consumption growth in China therefore makes sense to me. This is the conclusion of our excellent ICIS Supply & Demand Database, which forecasts that growth will fall from 6.5% in 2018 to 3.9% in 2025.

China may become a significant exporter

Our base case, however, sees China’s net PP deficit (imports minus exports plus local consumption) actually increasing from 3.9m tonnes to 4.2m tonnes between 2018 and 2025.

Unconfirmed capacity could dramatically change this picture. If one assumes that all the unconfirmed or speculative capacity we have listed goes ahead, then net deficits fall from 3.9m tonnes in 2018 to just 400,000 tonnes in 2025, according to my calculations.

This sharp decline in imports from 2022 occurs with operating rates at an average of just 82% in 2022-2025 – our base case assumption. Move these operating rates three percentage points higher and China moves to a position of net surpluses of between 1-2 million tonnes of PP in each of these years.

There is no room for complacency amongst PP exporters to China. They can plan for a scenario where China’s net PP deficit will be at 4.2m tonnes, but they must also prepare for much more negative outcomes.

Corporate planners should think through the implications of the huge investments in naphtha and propane cracking taking place in China. China plans to bring on-stream 16 naphtha and propane crackers by 2022 (of course there will be delays). These will often be integrated with refineries, as China is building around ten grass-roots refineries, some of which will be privately owned.

These refinery-to-cracker facilities – and also several new propane dehydrogenation (PDH) plants – will be located in new, state-of-the-art refining and petrochemicals industry parks. This is part of China’s drive to move up the manufacturing value chain in its rich coastal provinces. Be therefore prepared for China to move into greater production of copolymer grades of PP – the higher value grades.

It is hard to be certain of exactly how much PP will be built, across all the different grades, downstream of these new crackers and PDH plants – hence, our large number of speculative PP projects.

Our projects list also includes several unconfirmed PP plants downstream of coal-to-olefins (CTO) projects. The number of CTO projects has declined on cost and environmental concerns. But big companies with solid financing and good CTO technologies are still winning project approvals. This, I believe, indicates that the CTO business has a future. Despite CTO’s environmental drawbacks, it can be another means of boosting economic growth in inland China, where China’s coal reserves are located.

Expect PP production downstream of CTO to remain largely in commodity grades. This will reflect access to technology and the nature of local demand. Because income levels are lower in western China compared with the cost, consumption in the west will continue to be mainly in homopolymer grades.

Our base case assumes that China will still account for 10% of the growth in PP net deficits across the world’s major net deficit regions and countries in 2018-2025. But if China were to become a significant exporter then of course pressure would build on other exporters as competition increased.

Europe, including Turkey, stands out as the biggest target for exporters in 2018-2025. Between those years, its net deficits will grow by more 2m tonnes – 46% of total global net deficits. Asia & Pacific, including India and Southeast Asia, is the second biggest at 36% – 1.6m tonnes.

There is bright side which includes no longer viewing China as a guaranteed home for petrochemicals and polymers exports in general. The future for petrochemicals instead lies in sustainability and in being service as well as feedstock-led. There are huge opportunities to make money in these other areas.

PREVIOUS POST Why US-China Talks May So Easily Fail To Avert Trade War
NEXT POST Single-Use Plastics: The Good, The Bad And The Ugly