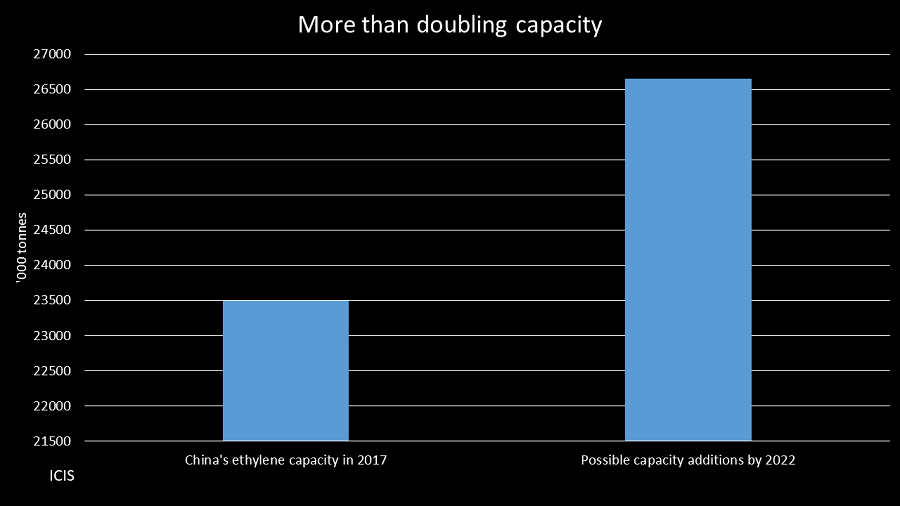 IN SEPTEMBER last year, I had thought that China might raise its ethylene capacity by as much as 71% by as early as 2022 over its end-2017 level of 23.5m tonnes. Now, though, our updated data show the potential for a staggering 113% increase over the next four years, when you look at the exact numbers. In theory, no less than 26.7m tonnes of new ethylene could be built by 2022.

Sure, a lot of this capacity might not happen at all or will at least be delayed. But our revised data remind us that China sees petrochemicals as a way of adding value to its economy. Modern highly sophisticated refining-to-petrochemicals complexes are one way for China to escape its middle-income trap.

Whilst as many as 21 new crackers could be constructed, also being planned are new coal-to-olefins (CTO) facilities. As much as 5m tonnes of ethylene – 18% of the total – could be added via CTO.

It is widely assumed that further investments in CTO in China will be very limited because of the environmental problems created by the process. But China’s environmental campaign is concentrated in its Central Plain, or North China Plain, region. This region, one third the size of the US, which is bordered the Yellow and Yangtze rivers, has a population of some 1bn.

Several of the CTO projects are located outside this region, in less populated provinces and administrative regions near to coal reserves.  Cleaning up the environment is still important in poorer, less populated China. But this has to be balanced against the need to create basic manufacturing jobs.

Further, as I’ve discussed before, these CTO projects could be part of wider coal gasification facilities. Coal may not be only turned into synthesis gas (syngas) to make methanol and then olefins for these new CTO plants.

Syngas could also be turned into transportation fuels, thereby reducing China’s dependence on imported crude oil. Increasing amounts of syngas in China may also be converted into synthetic natural gas, a replacement for natural gas:

These new CTO plants might thus be part of a wider strategy for maximising value from syngas.

A further 700,000 tonnes of ethylene could also be added via the methanol-to-olefins (MTO) route. This would involves coastal plants importing methanol feedstock.

What might be behind these further MTO investments is the US shale gas revolution.  The collapse of methane gas prices in the US has led to new methanol projects, some of which are tied into supplying MTO plants in China

Ethane and LPG as well as naphtha

Three of the crackers on our list plan to use ethane along with naphtha and LPG as feedstocks. There is also one project that would be 100% run on an ethane and another that would be solely fed by LPG.

Some of these ethane imports would come from the US, with local ethane via refineries possibly also part of the picture.

The liquefaction and transportation of ethane had previously been viewed as too expensive. Specialist ethane-only dedicated vessels also have to be built.  But INEOS, Borealis  and Reliance have turned these old assumption on their head by importing US ethane.

This has all been made impossible by the abundance of US ethane resulting from the shale gas revolution. China appears to be prepared to go a step further by building the world’s first grassroots cracker based on imported US ethane.

China is also seeking to cash on the length in global LPG – or propane and butane – markets resulting from the rise in US gas production.

But naphtha is of course another big feedstock route for many of these cracker projects, which will be supplied by some nine, or possibly more, new refineries.

Another important aspect to this evolving story is that several of these refineries and cracker projects involve privately-owned Chinese companies. State-owned Sinopec and PetroChina will no longer have the domestic refining and petchems markets largely to themselves.

The consequence for polyethylene

The global polyolefins industry is essentially bankrolled by China. Its deficits are by far the largest in the world.

But what might happen if China adds all of this ethylene capacity?

In 2017, 58% of China’s ethylene capacity was fed downstream into polyethylene (PE) plants, resulting in some 15.2m tonnes of PE capacity.

Now let’s assume that 58% of all this new ethylene again goes into making PE. This would result in 17.4m tonnes of new PE capacity!!

Our ICIS Supply & Demand database, which is in the process of being updated, will provide you with a proper assessment of which cracker and CTO projects we think will actually go ahead.