How Europe Can Move To Polyolefins Self-Sufficiency 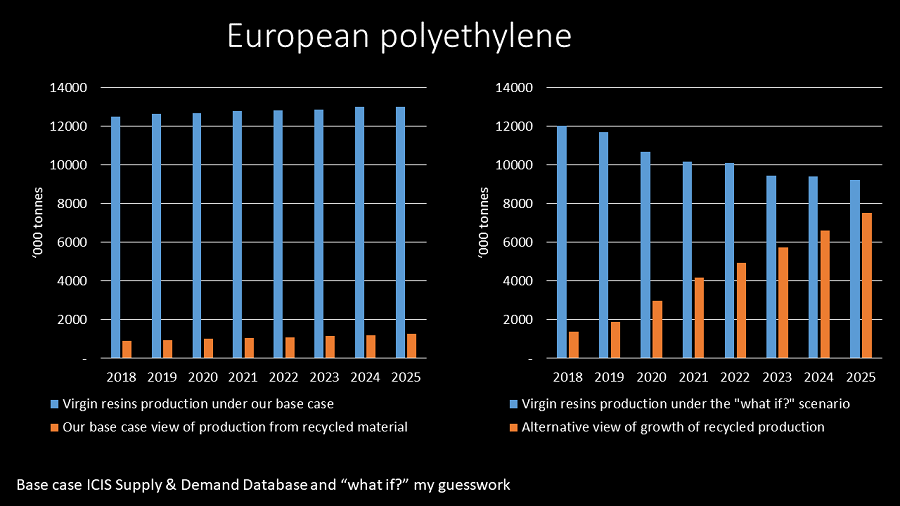 THE CONSENSUS assumption is that Europe will remain a major importer of polyolefins for the foreseeable future. Lack of feedstock advantage is said to be a reason why rising deficits will not be met by local production.

Owners of horse-drawn carriages would have probably been the last people you needed to ask about the prospects for growth of the internal combustion engine in 1900, for two reasons.

Firstly, if the evidence had been available that the motorcar was about to just about wipe out their businesses, they would have been reluctant to believe the evidence as it is never easy to confront painful economic changes.

And secondly, some of the horse-drawn carriage operators wouldn’t have even noticed the data as they would have been too busy doing their day jobs – running their businesses.

Meanwhile, polyolefins industry executives are at risk of being behind the curve, for the same two reasons detailed above.

Feedstock is feedstock – no matter where it comes from

The big threat confronting the European polyolefins industry is the EU Plastics Strategy, which was launched in January of this.

The strategy has set a target that all EU plastic packaging must be recyclable by 2030. And in 2015, the European Commission proposed that by 2025 at least 55 % of all plastics packaging in the EU should be recycled, up from 30% today. New environmental taxes and restrictions on the use of micro-plastics may also be introduced.

But this is can be turned to the commercial advantage of the European polyolefins industry:

On this last point, feedstock is feedstock. It doesn’t matter where the naphtha comes from provided it is cost advantaged. Naphtha from these pyrolysis units could be very cost-advantaged as landfill operators have to pay regulators to landfill plastic waste. They will be eager to pay polyolefins producers lower amounts if the producers take the plastic rubbish off their hands.

Our base case also assumes that European PE production from recycled resins will rise from 900, 000 tonnes in 2018 to 1.3m tonnes in 2025. This would represent an increase from 6% to 9% of total production.

But what if growth in the use of recycled resins is much greater than this? Just for the sake of argument, the charts at the beginning of this blog post shows our base case for recycled resin with how different the  outcome would look if production was 1.5 times higher than we assume in 2018, rising to four times higher by 2025. The chart on the right is purely guesswork, but this is appropriate as the industry is in entirely uncharted territory.

And to what extent will the remaining virgin resins demand be met local producers who can run at higher operating rates because of the availability low cost naphtha from pyrolysis machines?

Perhaps, also, as gasoline and diesel demand falls because of the rise of electric vehicles, refineries will be reconfigured to supply petrochemicals feedstocks at again advantaged prices. This would provide European producers with a further feedstock advantage.

Might all of this reach the point where Europe is no longer a net polyolefins importer? Ridiculous? Perhaps only as ridiculous as somebody watching the 1900 Easter Parade in New York who said to her companion, “In 13 years, I will be standing here and will only be able to see one horse-drawn carriage.”

*Thanks to Tony Seba, the Stanford University lecturer and author on innovation in energy and electric vehicles, for the New York Easter Parade example.