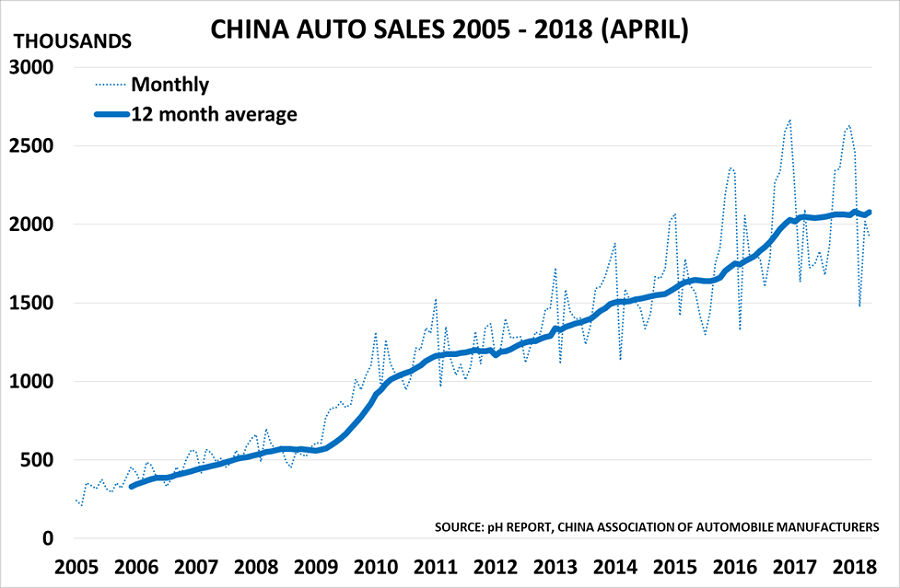 AUTOMOBILES are, of course, a key end-use market for chemicals and polymers and China has been by far the most important global market in autos since the Global Financial Crisis (GFC).

Chinese total vehicles sales soared from 6.3m in 2007 to 24.7m last year. Meanwhile, analysis from Paul Hodges shows that sales in the world’s six other major autos markets – the US, the EU, Japan, Russia, India and Brazil – had risen by just 400,000.

This overreliance on China for global growth since the GFC applies to every finished goods sector and all the chemicals and polymers that make finished goods. Take polypropylene (PP) as the best example here because of its heavy in autos manufacturing. Fifty eight percent of global demand growth was driven by China in 2007-2017, according to the ICIS Supply & Demand Database.

Why 2007 is such an important year is that this came just before the 2008 launch by the Chinese government of the world’s biggest-ever economic stimulus package.

This stimulus, mainly in the form of increases in bank lending, has created vastly bigger markets for chemicals and polymers. In 2007, Chinese PP consumption was 10.7m. By the end of 2018, we expect demand to reach 27.6m – a 160% increase!

There has been a 64% correlation between the increases and declines in China’s total social financing (TSF) and dips and surges in auto sales since 2008. As a reminder, TSF is the measure of lending via private shadow banks and the state-owned banks.

Now take a look at the chart at the beginning of this blog post. What you see is low growth in auto sales so far this year relative to most of the period since 2007. January-April 2018 sales were up by just 3% to 7.9m vehicles compared with the same period last year. Q1 2018 sales were flat over Q1 last year, which is the first time since 2007 that first-quarter sales have been flat.

This reflects this year’s decline in the availability of credit. Shadow lending was down by 64% in RMB terms in January-April of this year over the same period in 2017. In dollar terms, this represented a $274bn decline. TSF was down by 14% year-on-year in January-April 2018 – $110bn lower.

The fall in the availability of lending, along with low growth in auto sales, explains the following Q1 data from the Chinese PP market:

What is surprising about this anaemic growth in apparent PP demand is that it has occurred despite the heavy restrictions on imports of scrap, or recycled, plastic that were introduced in January this year. We had estimated that the restrictions would add some 300,000 tonnes for Chinese virgin PP consumption this year. Perhaps this was an overestimate.

As far as the auto market is concerned, growth will very likely continue to disappoint compared with the stellar 2007-2017 decade for two reasons:

PP producers must as a result question their assumptions on global demand growth, given the industry’s heavy reliance on China since 2007.

The consensus view is that global operating rates will steadily climb over the next few years to levels not seen since at least 2000. This is creating a lot of interest in new PP investments. But if China’s growth falls short of expectations, this will change the entire outlook.

Broadening this out to the implications of deleveraging for chemicals and polymers in general, this article from Bloomberg is very important. The wire service writes: On the back of a boom in property prices, [Chinese] household borrowing has been climbing for 10 years straight, at a pace that rivals any such run-up in major economies. At $6.7 trillion, and a record 50% of gross domestic product, private debt is now approaching developed-world levels and crimping consumer spending power.

The focus of deleveraging has so far been on corporate debt, hence why the squeeze on TSF made it harder for some of China’s plastic processors to buy PP imports during Q1. But because of this sharp increase in consumer debt, the next phase of the government’s deleveraging efforts could well be on the consumer.

Time isn’t on the side of Beijing, according to Fitch Ratings analysts Jack Yuan and Andrew Fennell. They estimate that China’s household debt-to-disposable income ratio could be close to 100% by 2020 versus today’s 82%. This would narrow the gap with the US at 105% and Japan at 99%.

Your sales planning team should factor in the strong possibility of higher interest rates in H2 2018 and 2019 as China takes on consumer debt. This would of course jeopardise growth in consumer spending.

It could be, though, that we will only see a very moderate economic slowdown in China during the rest of this year and into 2019. That’s certainly the intention of the government as it tries to tackle excessive lending without inflicting major damage on GDP growth.

But there is another scenario you need to plan for and this involves China losing control of events as a global trade war pushes the world’s economy into recession. A global trade war is in, my opinion, more than 50% likely to happen either this year or in 2019.