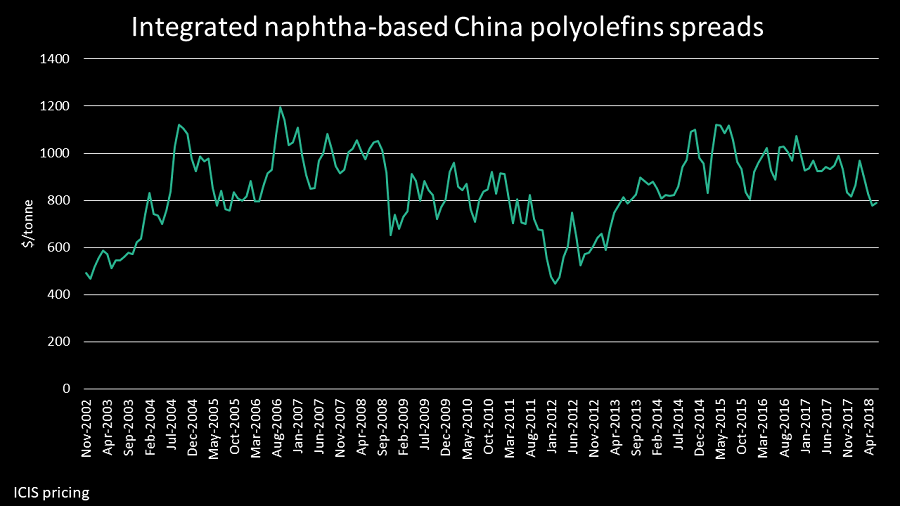 IT DIDN’T matter if there was any truth behind the stories people used to tell each other about the Chinese economy as it underwent an unprecedented period of growth in 2009-2014. All that mattered was that a lot of people were making a lot of money as petrochemicals and polymers sales volumes boomed. Few people really cared whether the most popular explanation of the economic boom – “China’s booming middle class”-  stood up to proper analysis because so much money was being made.

But for anyone taking serious notice of what was happening in China, it was clear that soar away growth was to a large degree about debt, much of which was turning bad. The few people who recognised this before 2014 were prepared for the sharp reduction in lending growth from January of that year. This led to an equally sharp decline in GDP growth.

Then came the surge in Chinese equities in the first half of 2015. Stock market wealth was supposed to permanently replace real-estate wealth as the main driver of economic growth. But in mid-2015, the stock market bubble burst.

Next came the 2016-2017 period of very relaxed lending standards. Yet more credit was pumped into the economy. Consumer debt started to really take off. Previously, despite the long-running real-estate boom, most lending had been channelled to corporates, especially the state-owned enterprises.

The 2016-2017 period saw a slightly adapted narrative emerge as petrochemicals and polymers companies tried to explain to their investors why they were making awesome money. “We are tapping into China’s booming internet-sales driven consumer-led economy, as consumption overtakes investment as the main driver of economic growth,” was the new explanation for why companies were being so successful.

There is some truth in this. But a rapid build-up in debt is always risky, no matter who is borrowing the money, whether is it consumers or companies.

Nobody should therefore have been surprised when the Chinese government made it clear during the 19th National Party Congress last October that another period of deleveraging was on its way. The government has been true to its word:

The impact of the credit squeeze on growth has been clear in polyolefins markets since January. Smaller-scale plastic converters have struggled to source lending, as they have also confronted higher costs from the new Environmental Tax introduced in January.  Some processors have also gone out of business because of the environmental clean-up.

The above chart reflects the impact of the credit squeeze. It shows that polyolefins producers have lost pricing power in China. This is partly due to the rapid run-up in crude prices. But if the fundamentals of Chinese demand had been stronger, producers would have been able to more fully pass on higher naphtha feedstock costs.

Integrated spreads, which includes a measure of the value of co-product credits, fell to an average of $777/tonne in May. So far in June, they have averaged $790/tonne. The last time integrated spreads were below $800/tonne was in May 2013.

It also important to note that the fall in spreads has occurred before the arrival of big volumes of US PE in global markets from recent start-ups.

Broader economic data also illustrates the extent of China’s economic slowdown. Fixed asset investment growth dropped to an all-time low of 3.9% in May compared with 6.1% in April. Infrastructure investment also slowed from 11.3% to 2.3%. Meanwhile, retail-sales growth registered the slowest growth in over 15 years, with car sales being the main drag as volume-growth fell to 7.9% from 11.2%.

Still, though, despite this quite alarming data, if external economic conditions had been more favourable then China would likely have only see a very moderate economic slowdown in H2 of this year.

External conditions are however truly scary. The US-China trade war risks denting Chinese exports, just as growth at home declines on the reduced availability of lending. I believe that China holds most of the long-term good cards in its dispute with the US. But that doesn’t mean to say that in the short term you shouldn’t prepare for a very sharp decline in Chinese economic growth.

A stronger dollar is also a threat as the Fed normalises its monetary policy. Emerging markets currencies, including not only the yuan but also the rupee, have weakened of late on the prospect of further cutbacks and in quantitative easing and higher interest rates. The yuan has lost 6% of its value since March and on Thursday, the rupee hit an all-time low against the greenback.

Offshore debt has become a concern for the Chinese government. As the Wall Street Journal writes: China’s top economic planning body has told the country’s heavily indebted property companies to curb their issuance of dollar-denominated bonds, a sign of Beijing’s concern about the side effects of the yuan’s recent slide.

Meanwhile, a Chinese-backed government think tank, the National Institution for Finance and Development, has warned of the potential for “financial panic” as a result of bond defaults and liquidity shortages.

The think tank said that the leverage of Chinese stock market investors totalled $5 trillion yuan, the same as before the 2015 stock market collapse. The Shanghai Composite Index is in bear market territory, having fallen 20% since January.

President Trump’s strategy for the mid-terms

The risk is that the US president will stick with his iconoclastic approach to international trade, at the very least until the after the US mid-term elections, as his approach is proving popular with his core supporters. What is also giving him leeway to stick to his guns is the strength of the US economy.

I also believe that there is a very good chance that after the mid-terms he will maintain his strategy because a.) It will remain popular and b.) He sincerely believes it will bring manufacturing jobs in big numbers back to the US.

Meanwhile, China will have to decide to either reverse economic reforms or stick with deleveraging. Even if China does relax lending conditions, there is the risk that it loses control of events as global economic conditions deteriorate.

Finally, there’s the issue of oil prices. President Trump is pushing ahead with his efforts to economically isolate Iran in order to exert maximum political pressure.

This includes encouraging the buyers of Iranian crude to spot buying Iranian oil from November onwards. Being tough on Iran could again play well in the mid-term elections. Bank of America Merrill Lynch believes that the president’s approach could push crude to above $90/bbl.

Back to my chart at the beginning of this blog post. A very sharp Chinese economic slowdown, more expensive crude and new US PE supply has the potential to push polyolefins spreads to much lower levels.

Polyolefins companies should stress-test their business models against the risk that spreads fall to lowest levels since we started our China PE and PP price assessments in 2002, which was in 2012. In that year, spreads averaged just $574/tonne.

PREVIOUS POST Prepare For A More Regionalised, Fragmented Polymers World
NEXT POST The Blog Is On Holiday And Returns On 23 July