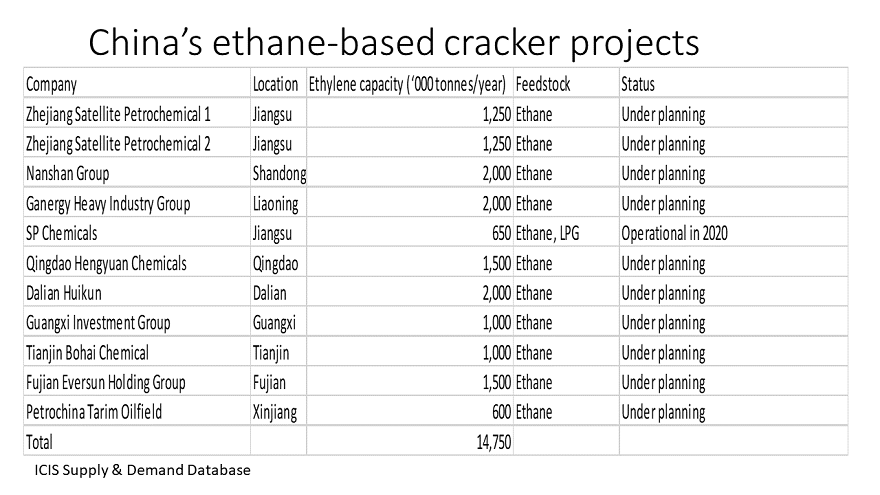 CHINA’S planned tariffs against US petrochemical feedstock exports threaten a major upheaval of global trade flows in the feedstocks.

The tariffs could also strengthen petrochemicals feedstock trading relationships between China and its fellow Belt and Road Initiative (BRI) country members. The Middle East may in particular step into the breach to supply the feedstocks that would no longer be shipped from the US to China.

The second phase of China’s $50bn worth of tariffs against US exports in general – which are set to be imposed on a date yet to be fixed – includes 25% tariffs on US exports of ethane, propane , butane, liquefied petroleum gas (propane and butane) and naphtha.

At stake could be the viability of 11 Chinese cracker projects (see the above table) that would be based on imports of US ethane, as the US is the only country in the world with sufficient surplus ethane to meet this kind of demand. The 11 crackers, if they all went ahead, would require 18.5m tonnes/year of ethane.

Even before the planned tariffs against US ethane, we had at best expected only 50% of these projects to happen because of higher US ethane costs. Ethane costs were set to rise in the States on the big build-up of local steam cracker capacity and an increase in ethane exports in general.

Other problems are the cost of liquefying ethane before it can be shipped and the need to build specialist, dedicated ships to move ethane.

Now, though these China cracker projects would have to climb the additional hurdle of ethane tariffs of 25% if the tariffs go ahead.

Exporters of steam cracker derivatives to China, especially PE, may see this as a fantastic opportunity. A big hole could be blown in China’s plans to significantly raise its self-sufficiency in PE and other ethylene derivatives. This may leave the country’s ethylene derivative imports at very high levels for the next ten years.

Chinese companies may invest more in say the Iranian natural gas and oil refining businesses now that Iran, a BRI member, faces further economic sanctions from the US following the US withdrawal from the Iran nuclear deal.

Feedstock supply for China’s propane dehydrogenation (PDH) capacity seems likely to follow the same pattern. As recently as 2012, China had no PDH capacity, but by the end of this year, the PDH process will account for 20% of the country’s total propylene production of around 29m tonnes.

Given the length in global propane markets, and again because the Middle East is a major source of propane, China’s PDH operators should be able to switch quite easily from US to Middle East suppliers.

Further, if Chinese companies invest in Middle East natural gas extraction through the strength of BRI relationships, this would improve the economics of China’s PDH players.

There is another smaller part of the story and that is China’s coastal methanol-to-olefins (MTO) projects. There are three of these projects with a total ethylene capacity of around 800,000 tonnes – just short of the equivalent of one world-scale cracker.

Global liquefied natural gas markets are set to remain oversupplied for the next few years, which means there should be no shortage of methane to make methanol. This could create a cost advantage for these Chinese MTO projects, as they would be based on imported methane.

And again, of course, the Middle East is abundant in methane and has major methanol capacities. Might stronger China-Middle East relationships through the BRI result in the emergence of more Chinese MTO projects?

Perhaps not because of the economics of the MTO process. But this is the kind of question we need to ask as we study the radical shake-up in petrochemicals feedstock flows that would happen if China goes ahead with its feedstock tariffs. 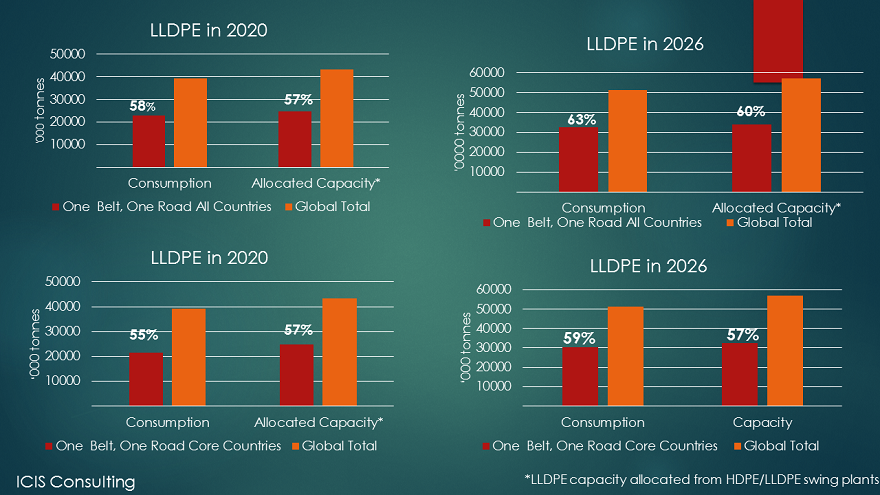 The above chart serves as an important reminder of how it wouldn’t take a great deal of further investment to make the BRI (formerly called One Belt, One Road) entirely self-sufficient in many petrochemicals and polymers.

In addition, the US, which is outside the BRI, faces 25% Chinese tariffs on polymers. This is also part of the second wave of China’s $50bn of tariffs. These tariffs would be levied on PE, PVC, polycarbonate and polyamide.

If these polymer tariffs go ahead, and if they stay in place for several years, this woild increase the already strong viability of new petrochemicals projects that have been recently announced in the BRI region. These include Saudi Aramco’s joint-venture cracker projects with Total and with an Indian consortium led by Indian Oil Corp in Saudi Arabia and India respectively.

All of the above also serves as a reminder of just how cleverly targeted the Chinese tariffs are. They go to the very heart of the US economic revival, as that revival has been largely built on the shale oil and shale gas revolutions.

What happens next? One hopes that China is in such a strong position through its carefully targeted tariffs that it draws the US to the negotiating table, leading to compromises that make both sides happy.

Right now, though, following President Trumps’threat yesterday of a further $200bn worth of tariffs against Chinese imports, this seems unlikely.