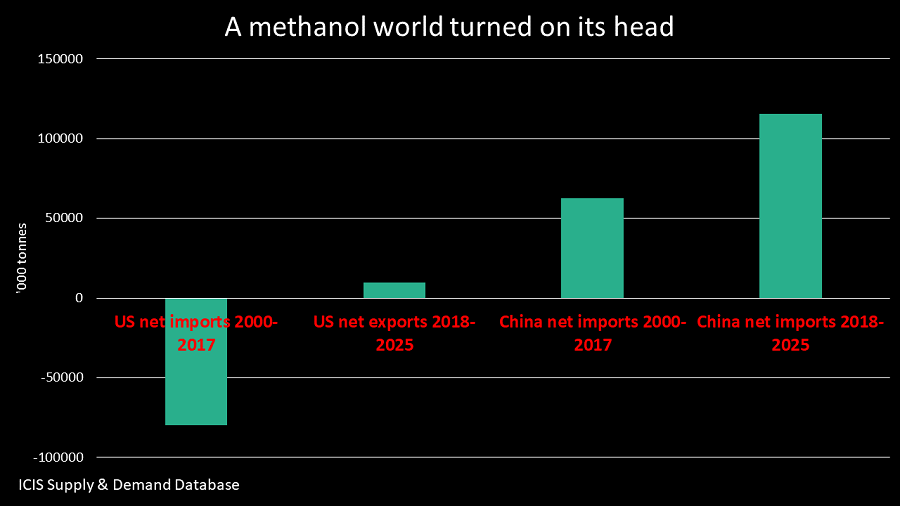 CHINA crunches exactly the same data as the rest of us, as I warned on Friday when discussing polyethylene (PE). China’s government is very aware of the dominant role China plays in global energy, petrochemicals and polymers markets.

In many energy and petchems products, no other country or region comes close to being as big as China in terms of import volumes and demand. This is the case both today and during at least the next ten years under any sensible supply and demand forecasts. This gives China an incredibly strong bargaining position in its trade war with the US.

An illustration of my point came just a few hours after I published my Friday post, when China said it was considering imposing 25% import tariffs on a further $60bn US goods. This new list includes liquefied natural gas (LNG), and methanol, according to The Methanol Institute, a US trade association. The announcement of the methanol tariff reciprocates an earlier US plan to impose tariffs on US imports of Chinese methanol.

The latest Chinese move follows its announcement in July of plans for 25% tariffs on US crude, ethane, propane, petrochemicals and polymers imports.

Let us look at methanol as another case study of what is at risk for the US, again using the excellent data from our recently updated ICIS Supply & Demand Database. You can also click here for the ICIS immediate reaction on the implications for the LNG market.

US to swing from big methanol imports to exports

The above chart shows the extraordinary turnaround taking place in global methanol markets:

The big rise in China’s imports might lead you to the conclusion that it will have no choice but to import from the US. This would be the wrong because of the still dominant export role that the Middle East will continue to play in 2018-2025. Its net exports will be at 119m tonnes – 60% of the global total. The Former USSR will also remain a big export player with net exports of 19m tonnes, 10% of the global total.

The dominant market position enjoyed by the Middle East – along with abundant gas reverses that could enable it to further grow production – puts the US in a very vulnerable position.

And as China grows geopolitically and economically closer to the Middle East because of the Belt and Road Initiative (BRI), their export-import flows seem certain to increase. The Middle East will see more Chinese investment in oil, gas and petrochemicals production and downstream manufacturing. Exports of oil, gas and petrochemicals will then flow back to China, including quite possibly bigger volumes of methanol.

It is also essential to note that the BRI does not just comprise plans for trillions of dollars of industrial and infrastructure investments. China also wants to create the world’s biggest free-trade zone, surpassing the EU. Middle East methanol exports to China could end up moving duty free as US exports carry a 25% tariff.

China may also move geopolitically and economically closer to the Former USSR, within which Russia is by far the biggest methanol producer. Russia is a member of the BRI.

There is another option for China to its meet big methanol needs. This is via its coal reserves which are the second-biggest in the world behind the US.

New coal-to-methanol plants are possible, provided pollution can be minimised by using expensive technologies. China knows that it simply has to win its battle against air, soil and water pollution. Alternatively, China might build standard methanol plants in less populated areas where the pressure for new jobs is greater than the pressure for lower pollution. This would help narrow the big urban/rural income gap.

The tariffs being planned by China on US imports are cleverly targeted. Energy and petrochemicals tariffs strike at the very heart of the US economic recovery, as much of the recovery has been built on the shale oil and gas revolutions.

(This is of course why the US is engaged in a major wave of methanol capacity additions. Low-cost methane has transformed the economics of the US methanol business.)

You might argue that the tariffs won’t be a big deal for the US methanol business. “Markets tend to adjust to tariffs as imports that are lost in one country are gained in others, provided you have the right feedstock-cost position,” is one argument I’ve heard applied to petrochemicals and polymers in general.

The above data tell us that this would be a dangerously a complacent view if it was applied to methanol. Without easy access to the China market, US producers will struggle.

This is a view supported by the Methanol Institute in the same press release  I have linked to above. They wrote:

The call for reciprocal tariffs by China on US. methanol could have a deeply harmful effect on the US methanol industry, which is currently experiencing a period of robust growth due to the shale gas revolution. This resurgence of domestic methanol production includes restarting of plants that had been mothballed for a decade, as well as greenfield new builds. Each new methanol plant built in the US drives capital spending of $1.1 billion and an economic ripple effect worth $1.5 billion.

We all hope that either or both the US and China blink and pull back from their trade war. But President Trump has long held his views on trade with his approach to trade at the very heart of his “America First” strategy. China may react badly to the perception that it is being bullied. Further, the US demand that China abandon its “Made in China 2025” programme is as non-negotiable as President Trump quitting America First.

If the US-China trade war drags on and intensifies, a redrawing of energy, petrochemicals and polymers trade flows won’t be on the only outcome. The other outcome would be a new global recession.