Polyethylene: Damage From Trade War Should Not Be Underestimated 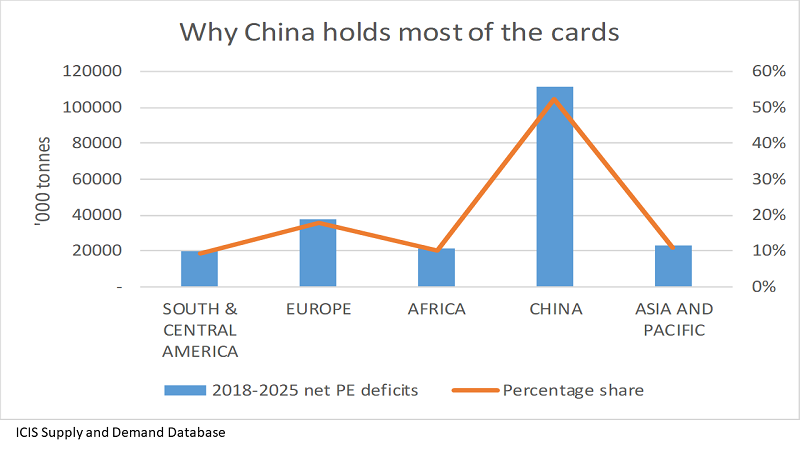 THE argument that the US-China trade war will have a minimal impact on the global polyethylene (PE) business is based on two assumptions, both of which I will argue could easily prove to be wrong.

Firstly, some commentators quite rightly point out that the proposed Chinese tariffs on US PE exports only cover a small percentage of the US PE industry. In the case of linear-low density PE (LLDPE), only a small number of speciality grades have been selected for China’s 25% tariffs when you examine the customs codes identified by China. ICIS data indicate exports of these grades to China only amounted to 0.4% of total US 2017 LLDPE production.

Of a bigger deal is LDPE as all grades are covered. But still, ICIS data indicate that of total US 2017 LLDPE production, exports to China amounted to just 6.9%. The optimists – who instead call themselves “the realists” – also argue that LDPE is of only one of the big three grades of PE and has the smallest global demand.

Secondly, cynics suggest that once the mid-term elections over, President Trump will dial down the rhetoric as anti-free trade talk is popular with his core supporters. Or even if the rhetoric and ramping-up of tariffs from both sides continue, at some point in the not too distant future one or both parties will blink and back down. The US and China have too much to lose from a full-blown trade war.

Why Argument One could be wrong

Take a look at the chart at the beginning of this blog post. This is from the 2018 updates to our excellent ICIS Supply & Demand Database. It once again underlines that China will remain by far the biggest global PE import market:

Not included in the chart above, but also in our Supply & Demand Database, is that the US will have to place a total of 50m tonnes of net surpluses (exports minus imports) in 2018-2025. This seems to fade into insignificance compared with the Middle East’s 140m tonnes. But it is the growth of surpluses that really counts. The US took an 18% share of the growth in global surpluses in 2000-2017. This rises to 49% in 2018-2025.

The Chinese government crunch the data like the rest of us. They know that the US has to conduct a major sales and marketing effort to place these extra volumes, with China the only market where these volumes can be comfortably placed.

China could raise its PE imports from the Middle East at the expense of the US as a means of exerting pressure on the US. This can be through one or more the following two routes:

China becoming more dependent on Middle East PE would be consistent with the decade from 2007 to 2017. During those years, US share of the China PE market slipped as the Middle East gained ground. Southeast Asia (SEA) also gained ground in China. SEA is also part of the BRI.

It is also essential to note that China is planning a range of tariffs against US energy and petrochemicals feedstock exports. The biggest target is crude oil. Also included in the list is ethane and propane. These are cleverly targeted tariffs, as much of the US economic recovery has been driven by booming energy production, thanks to the shale gas revolution. Targeting the broader US PE industry would seem to fit with this strategy.

If the US saw its ability to export more grades of PE to China significantly curtailed, it would have a choice of either cutting back on production or maintaining production and targeting smaller import markets. I suspect the latter would be the choice as several of the new US PE plants are operated by natural-gas producers. The natural gas players have to get rid of big quantities of ethane before they can put methane into pipelines. And the only end-use market for ethane is steam cracking.

The end-result would, I believe, be a race to the bottom as margins tanked for the mainly naphtha-based PE producers in these other smaller import regions and countries – most notably Europe. In SEA, the region’s producers would struggle to export to Indonesia and Vietnam, SEA’s biggest deficit countries, because of US competition.

Why things could get out of hand

This assumes that the US-China trade war escalates because one or both sides are unprepared to back down.  As I said, one of the reasons to believe that the war will not get any worse is because both sides have too much to lose.  But China holds most of the cards in this dispute as it is the most important global market for not only PE, but just about everything else. It knows that no multi-national company can afford to forgo China.

The BRI also offers China strong alternatives to the US for securing the basic raw materials – such as oil, gas and PE – it needs to maintain its economic growth. The BRI in its broadest definition may also be an ever-more important source for the high-value technologies China need to escape its middle-income trap. A recent EU-China summit was important in that for the first time the EU gave its formal backing to the BRI, albeit with caveats.

What is absolutely unnegotiable for China is its Made in China 2025 initiative, as its success is essential if China is going to escape its middle income trap. It is so important to remember – and most competitors overlook this – that China’s long-term economic prosperity is being severely challenged by its ageing population. China therefore simply must make big progress in higher-value industries such as artificial intelligence and electric vehicles. Hence the non-negotiable nature of Made in China 2025.

What of the view that President Trump may dial down the rhetoric and back away from a full-blown trade war? In this context we perhaps should not be too worried about his latest threat to raise tariffs to 25% from 10% on additional $200bn of Chinese imports:

But here’s the thing: President Trump has held his views on trade for many years and believes his approach is the right way to win compromises from China on opening-up markets and intellectual property rights. So perhaps President Trump will stick with his approach. Maybe this will lead to the full-blown all-out US-China trade war that everyone so much fears.

I could be wrong, of course

Many people will disagree with me, including President Trump’s supporters. They will argue that a new approach to wringing concessions from China is needed, and that his approach will work to everyone’s advantage. And returning to the subject of PE markets, they will contend that my concerns for the PE business are also overblown.

I could be wrong, of course. But what is surely beyond any doubt is that we live in exceptionally uncertain geopolitical and economic times. PE producers simply cannot afford to only assume that everything will turn out for the best. They have to build alternative scenarios.