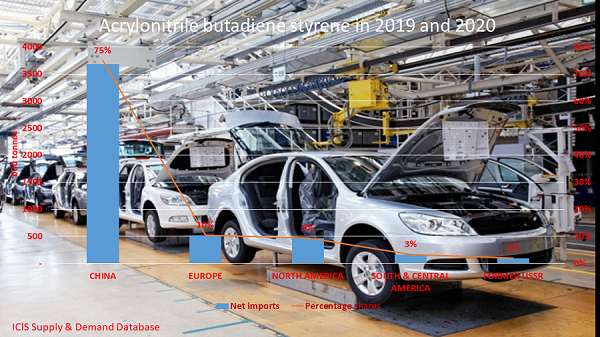 The reason is of course that petrochemicals are needed to make these finished goods, with Chinese local production unable to meet very strong demand. This explains why China is by far the biggest global importer across nearly all petrochemicals and polymers.

Impact on ABS and South Korea

In response to China’s voracious demand for petrochemicals and polymer imports, other countries and regions have built local capacity – including South Korea in the polymer, acrylonitrile butadiene styrene (ABS).

An important market is the automobile sector where it is used in instrument panels, consoles, radiator grills, headlight housings and interior trim parts with growing use in recreational vehicles.

Other applications include domestic appliances such as refrigerators and sewing machines, pipes, fittings and other products used in the construction industry, recreational goods such as boats and mobile homes.

South Korea, along with Japan and Taiwan, province of China, were the only global ABS net exporters (exports minus imports) between 2008 and 2017. South Korea accounted for a 46% share of total global net exports followed by Taiwan at 44% and Japan at 10%.

Meanwhile, China was overwhelmingly the most important importer. During the same period it accounted for 79% of global net imports with Europe, which in our database includes Turkey, in distant second place at 8%.

South Korea could thus be a substantial loser from US tariffs on Chinese finished goods as a result of a drop in China’s demand for ABS. This drop in demand would be due to a decline in China’s exports of goods made from ABS to the US such as computers, televisions, radios and auto components.

Chinese networking equipment, disc drives and optical media that are used to make computers, televisions and radios are amongst products affected by the 10% US tariffs introduced from this Monday – 24 September. So are auto components. The tariffs could be raised to 25% from 1 January next year.

South Korean ABS producers seem almost certain to have to cut back on operating rates because of weaker demand from China.

The end-result would be surplus local propylene and ammonia – the feedstocks used to make acrylonitrile.

South Korean butadiene and styrene supply would also lengthen. This would then lead to greater length upstream of styrene in its raw materials – ethylene and benzene.

One solution would be to export the raw materials. But additional freight costs to destinations further away than China would eat into South Korean petrochemicals margins.

And as South Korea exported more of these ABS raw materials, this would create oversupply issues in the raw materials used to make ABS.

But the dilemma would be that this would damage feedstock supply for other value chains – for instance, butadiene to make synthetic rubber for South Korea’s very big auto tyre manufacturing industry.

Europe at risk of being flooded by ABS

What makes South Korean ABS operating rate cuts inevitable is that before the trade war began, we had assumed that the country’s net exports of ABS would total 3.2m tonnes in 2019 and 2020. We had forecast Chinese net imports at 3.7m tonnes – 75% of the global total.

Let’s assume China’s net imports are just 20% lower at 2.9m tonnes. That would of course mean insufficient room for 3.2m tonnes of South Korean material – especially when you consider competition from Japan and Taiwan – and also the Middle East which will become an ABS net exporter in 2019-2020.

A 20% fall in Chinese imports would reduce total global net ABS imports to 4.1m tonnes from our base case forecast of 4.9m tonnes.

South Korea may try to minimise ABS operating rate reductions by winning more market share in markets other than China.

South Korea might end up in a pricing battle with European ABS producers at the expense of margins. This could ultimately lead to calls by the European players for trade protection measures.

Selling more volumes to Turkey will clearly be a major challenge because of Turkey’s currency crisis.

With the Turkish lira much weaker against the US dollar and with Turkish interest rates at 24%, the country’s petrochemicals import volumes will in general be much weaker in 2018 than in 2017.

The loss of earnings in ABS look set to be repeated across many other petrochemicals in South Korea. The country is a major petrochemicals producer with a large percentage of its production exported to China.

The US/China trade war might lead to a new global recession. South Korea would, like, every other country and region, suffer from this broader economic problem.

This is just small example of how the petrochemicals world is being turned on its head by the trade war.

How exactly events will play out up and down all the petchems value chains nobody can of course pretend to know. So many outcomes are possible because of the complexity of the values chains and how they link with manufacturing industries.

But what we do know is that it is not just the US petchems industry that will suffer from disruptions global trading patterns. This trade war won’t be easy for anyone to win.

PREVIOUS POST US styrene another petchems sector at risk from trade war
NEXT POST US LLDPE needs 68% export growth next year to top five markets.....

US styrene another petchems sector at risk from trade war

By John Richardson THE US decision to pick a fight with China over trade and geo...

…..and that’s assuming there is no trade war with China! By John Ric...