US Economic Strength Of Little Benefit To Global Polyolefins 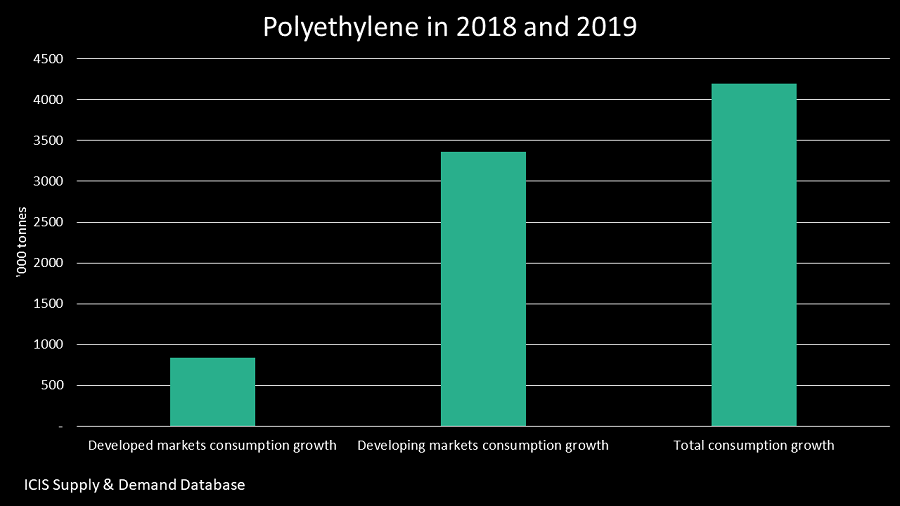 THE BETTER that things get in the US (provided you own equities and are not on a zero-hours contract) the worse things become in emerging markets.

Despite a weaker greenback on a trade-weighted basis, the investor sell-off in emerging markets continued last Thursday, wrote Bloomberg in this article. The Lira was for instance down by 4% against the dollar, despite Turkey edging closer to solving some of its problems.

The core of the problem was this: US second-quarter GDP grew by 4.2%, which added to idea that the US economy was almost immune to events outside its borders. This firmed-up the belief amongst investors that the Fed would increase interest rates on more than four occasions over the next 12 months.

“Though both the European Central Bank (ECB) and Bank of Japan are still adding liquidity to the system, the pace at which they’re doing this is winding down,” wrote Bloomberg in the same article. ECB bond purchases are due to come to a halt in December.

The most overlooked, but most important, wind-back in monetary stimulus is taking place in China.

China’s shadow bank lending in the first half of this year was down by $468 billion compared with H1 2017 and is now back at 2002 levels, which well before China launched its giant economic stimulus package. First-half 2018 Total Social Financing, which is lending via both the private or shadow banks and the state-owned lenders, was $229 billion lower.

Will there be a big return to stimulus if conditions become worse in emerging markets? No, for these three reasons:

President Donald Trump is pushed for sanctions against Turkey and Russia and has made tweets against South Africa, claiming that the government has grabbed land belonging to white farmers, again writes Bloomberg. Will South Africa also face sanctions?

Meanwhile, the US/China trade war could accelerate this week if President Trump goes ahead with his threat to impose 25% tariffs on a further $200bn worth of Chinese imports. A decision is due on 6 September.

China’s economy is hugely important for the rest of the developing world because it is a major buyer of resources, such as iron ore from Brazil and oil from the Middle East.

China is the most important source of investment dollars for the emerging world through its Belt and Road (BRI) programme.

This would mean a significant knock-on effect if China’s economy continues to weaken because of the trade war.

China would end up buying less resources, and would be able to afford less investment dollars for the BRI. There are myriad other ways that the fortunes of China are tied to those of all the other emerging markets.

Contagion is therefore a major risk. Currencies and other financial markets outside the US could continue to weaken.

Last week, the contagion risks were still centred on Turkey. Now the centre has shifted to Argentina with its peso down by more than 50% against the dollar since December 2017.

India and Indonesia, switching the focus to Asia, are also struggling with weaker currencies. The Indonesian rupiah was last week close to its all-time low in September 1998, during the Asian Financial Crisis. India’s rupee has already reached a record low against the US dollar.

One can argue back and forth about the strengths and weaknesses of individual economies. For instance, Indonesia is an a lot better fiscal position than it was 1998, thanks to cautious government policies.

But at times of contagion, strengths and weaknesses of individual countries do not matter. What instead matters are the weaknesses of the weakest country – first Turkey and now Argentina.

What could well also matter is a growing recognition that President Trump will not change course in his approach to China.

This raises the possibility that the trade war will continue throughout 2019 and into 2020. Other major disputes between the US and the rest of the world on trade and politics also seem a strong possibility during the next 12-18 months, given the president’s approach.

The impact on polyolefins

The polyolefins industry is a typical commodity in that its demand is driven by emerging markets.

True, the US and other developed markets have big levels of consumption. This means that only low percentage growth will deliver the requirement for significant extra tonnes in the US and Europe etc.

But consider this, from our ICIS Supply & Demand Database:

Perhaps the US stock market rally will continue. But the data show that this is almost entirely irrelevant for US PE companies when it comes to the volumes of PE they need to sell to justify their new investments.

PE and PP companies everywhere must build contingency plans for the global wind-back in monetary stimulus and the risk of the trade war extending throughout next year and into 2020.