US ethylene glycols: The Cost Of Exclusion From China 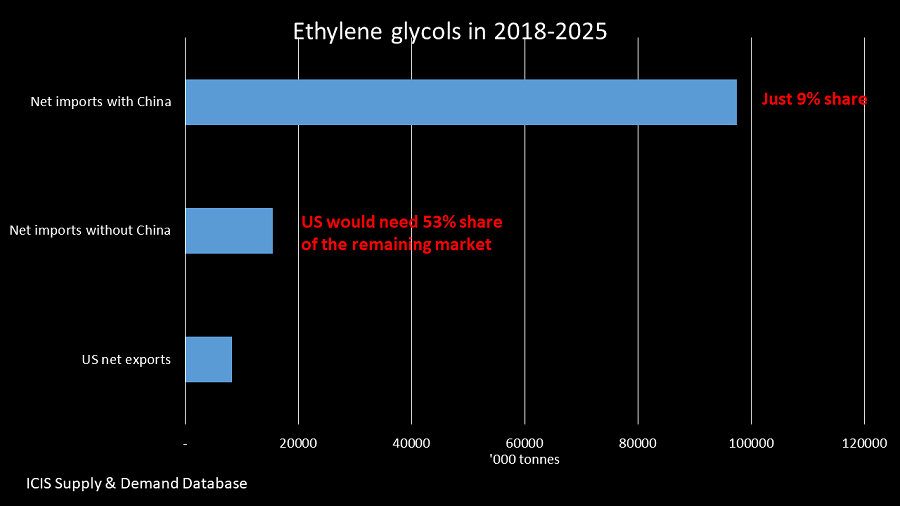 IF THE US were unable to export ethylene glycols (EG) to China the economic logic of US capacity expansions would face major challenges.

Between 2018 and 2025, China will account for no less than 84% of global net imports (imports minus exports) amongst the major importing regions and countries.

(For those who would like the background to why we take this view on China, see the section at the end of this blog post – Why China Will Continue To Dominate EG Imports).

There is a chance that the US will be able to export very little, if any, EG to China in 2018-2025 because of a permanent falling-out between the US and China.

Think beyond just the immediate consequences of the 25% import tariffs that China imposed on US EG imports from 23 August of this year. We could see a major economic and geopolitical re-alignment. The US may build one trading bloc involving its allies and China another involving its allies.

Crucially for all petrochemicals and polymers trade flows, the Chinese bloc would include the Middle East, Southeast Asia (SEA) and India. These are of course major petrochemicals producers and have significant expansion plans in place.

You can argue, wrongly I believe, that if US polyethylene companies were unable to export to China over the next seven years they would still be OK.

But the statistical evidence for EG seems to me beyond doubt.  The EG industry would face significant challenges because as China is set to account for 84% of global net imports between 2018 and 2025:

Assuming that US net exports do reach 8.3m tonnes and that the US is able to export to China, it would have to take just a 9% share of total net imports amongst the major net importing countries and regions. Very manageable.

Take China out of the picture and it would have to gain a 53% share of the remaining import market. Domestic producers in these remaining markets would be sure to ask for trade protection measures if they were faced with a flood of EG imports. More established exporters to these markets would also fight to retain their positions.

Does China, though, need US imports? Not if the Middle East can push existing plants harder over the next seven years and add new capacity. New Iranian capacity might be in doubt because of sanctions, but maybe not elsewhere in the Middle East.

Populist US politics here to stay

The post explains why President Trump won in 2016 and why his brand of politics has a very good chance of remaining in favour. Older people are less optimistic than young people about the future. You can draw a close parallel with ageing populations in the US and elsewhere and opinion surveys showing majorities of people believe their countries are heading in the wrong directions.

Add to this the loss of jobs to automation and artificial intelligence and the connected stagnation of US middle class incomes and, as I said, the president’s brand of politics may last beyond 2020. He could be re-elected for a second term, of course. Or another populist president may come along offering the same solutions on trade.

The risk of a permanent falling out between the US and China is because the US is asking China to make concessions that China cannot possibly meet. For example, if China agreed to wind back state subsidies for manufacturing, it would be jeopardising its long-term economic prosperity.

“Nonsense” might be your first reaction. But did you also think that President Trump had any chance of winning the presidential election? Did you also believe there was no way that the US and China would end up in a trade war?

We all hope to wake up tomorrow morning and find the world is like it used to be. But hope is not a strategy.

Why China will continue to dominate EG imports

But it is MEG that makes up the vast bulk of EG production because of its use as a feedstock to make polyester clothing and non-clothing end-use applications. MEG is also used to make polyethylene terephthalate chips and films for bottles and packaging film.

What our forecasts tell us is that despite China’s rising labour costs, resulting in the drift of clothing and non-clothing manufacturing to lower labour cost countries, this will make no difference upstream in MEG. China will remain the only significant game in town for global imports.

First of all, we need to put the manufacturing drift into the proper context. China still accounted for 35% global clothing exports last year, compared with just 6.5% from Bangladesh, 5.9% from Vietnam and 1.6% from Cambodia, according to the World Trade Organisation.

This 35% will decline. But by 2025, China will very probably still be the biggest global apparel and non-apparel exporter because of its major supply chain efficiencies. It is also investing heavily in automation.

Where the manufacturing drift does occur it will very often involve Chinese companies relocating overseas to fellow BRI member countries.

For example, a Chinese clothing factory moves to Cambodia with the help of Chinese government subsidies because Cambodia has a very youthful population. In 2017, Cambodia’s median age was just 25.3 compared with 37.4 in China.

China will remain very short of MEG because it will be unable to build enough steam crackers to make the ethylene to raise its MEG self-sufficiency. Meanwhile, the coal-to-olefins route to MEG seems likely to be constrained by cost competitive and pollution issues.

There is another route to MEG in China. This, like CTO, starts with gasifying coal into syngas (hydrogen and carbon monoxide) and then turning the syngas into methanol. Next, though, the methanol is used to make first methyl nitrite, then dimethyl oxalate and finally MEG. But the technology is thought not to work particularly well as it only produces low yields of MEG suitable for polyester production.