Complacency, LLDPE and plastic waste: A collapse in demand 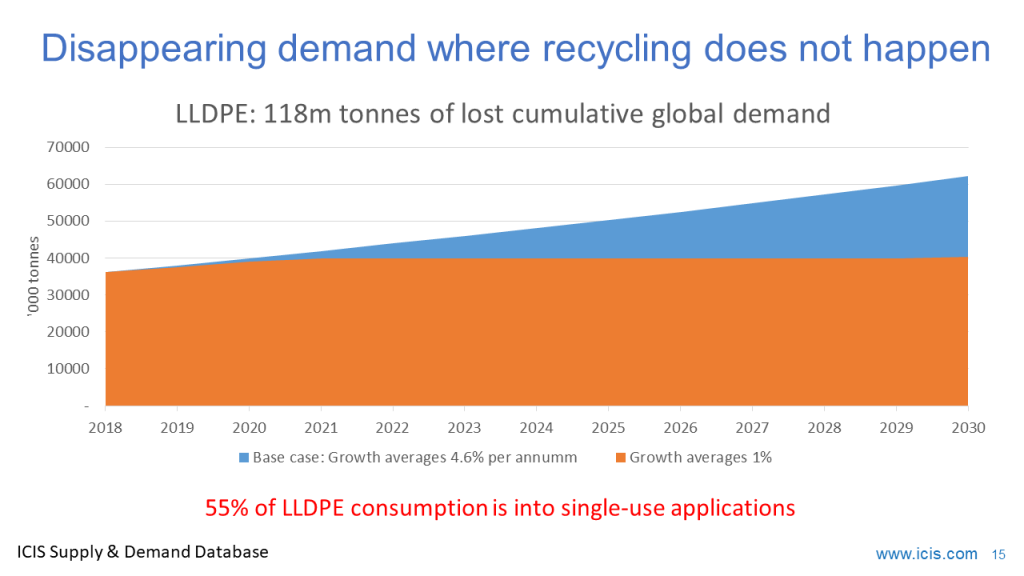 THE TECHNICAL people, those with PHDs in polymer science who have also spent years in application development work, will tell you it is simply impossible to find other materials that perform as well as LLDPE.

Multi-layer LLDPE films are vital in applications such as wrapping food, they argue, thanks to excellent barrier properties. We are told that this makes replacing these films impossible as the end-result would be  more food going to waste. It can be argued that this makes getting rid of LLDPE morally indefensible in a world where hundreds of millions of people still lack adequate nutrition.

Methane emissions from rotting food are the world’s third-biggest source of these emissions behind China and US. You can therefore make a strong case that the plastic waste problem caused by LLDPE is a small price to pay for the benefits it is already delivering in mitigating climate change. Perhaps we should use a lot more LLDPE to further limit climate change.

But this is assuming materials science remains static. What if other materials are developed – made from other polymers or non-plastic materials – that perform just as well as LLDPE? The public and legislative reaction to the plastic waste crisis is sufficient to make this happen.

New and very ambitious initiatives for dealing with plastic waste are constantly being announced. Take, for example the recent announcement by the Ellen MacArthur Foundation in collaboration with UN Environment. 250 companies, including polymer producers Borealis and Indorama, have signed up to a bold set of sustainability targets for 2025.

This means that there is an awful lot of money to be made by the innovators if they take on and beat an LLDPE industry that rests on its laurels.

It is also important not just to think in terms of comparable standards of performance of LLDPE versus other materials. Because of the strength of the public backlash against plastic waste, wholesalers, retailers and the general public may be willing to accept inferior performance by other materials that emerge as replacements for LLDPE.

Emotions are very important here. Think of the emotional response to pictures of a dead pilot whale in Thailand that was found to have eight kilograms of plastic in his stomach. People could be willing to pay more for inferior packaging materials if they are 100% recyclable or compostable etc.

The LLDPE industry has to as a result innovate, and innovate very quickly, if is to avoid the chart at the beginning of this blog post becoming reality:

LLDPE confronts loss of demand because, as science stands now, its is very hard to recycle. LLDPE is also especially vulnerable to the plastic waste crisis because around 55% of its consumption is into single-use applications.

This isn’t the case with HDPE where, as I discussed last month, recycling is already pretty viable. The future for HDPE looks set to be more of changes in how the polymer is made and less demand destruction.

LLDPE producers have to find ways of economic and sustainable recycling if they are to avoid a major loss of sales.

The loss of 118m tonnes of lost LLDPE demand would have a major effect on the viability of the whole steam cracker business, unless alternative uses could be found for the lost ethylene demand. 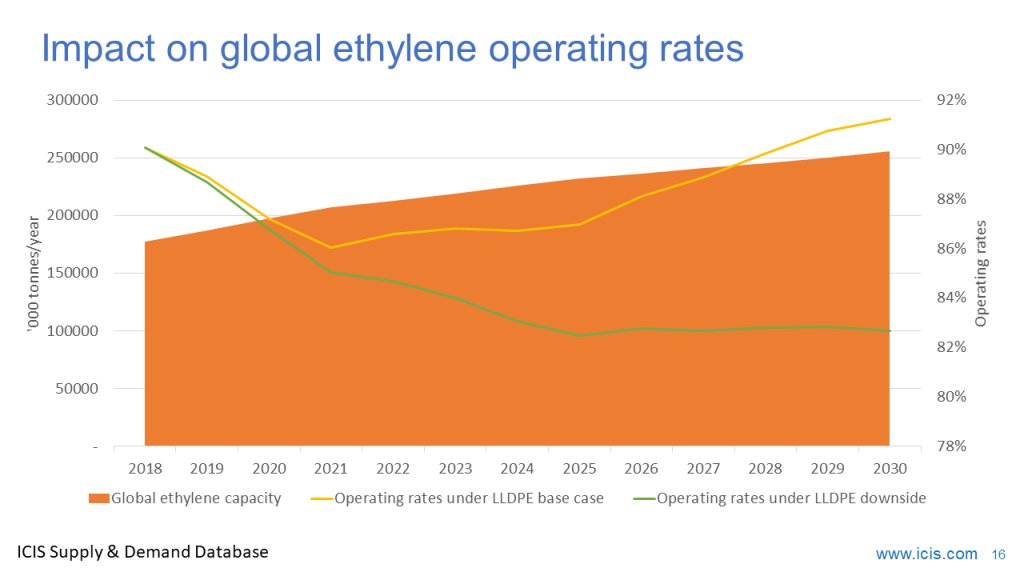 The above chart assumes no alternative uses are found. Based on new investment plans, global ethylene operating rates fall to just 82% from 2025 onwards. In reality, though, new cracker investments would surely be cancelled.

If mechanical recycling – i.e. processing waste plastic directly back into polymers – proves impossible perhaps the answer might be chemicals recycling. Here plastics are broken back down into transportation fuels and naphtha.

A combination of solutions seems likely. We as yet don’t know all or maybe even any of the answer. But we cannot afford to delay our search.