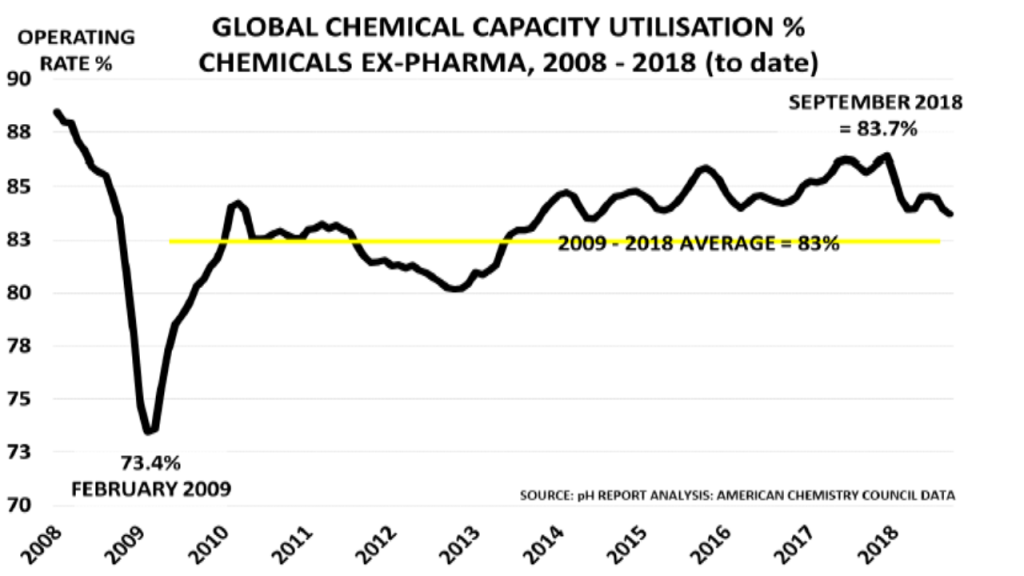 ONE OF THE useful things about chemicals industry data is that they are an early indicator of macroeconomic trends because chemicals are of course the raw materials for so many finished goods.

This is why the latest chart from the American Chemistry Council seems to indicate that a global recession is likely very close. My base case is that a recession will happen at some point in 2019.

The chart, borrowed from the latest PH report, shows that global capacity utilisation was at 83.7% in September this year, significantly lower than September 2017’s level of 85.7%. The fall in operating rates was very broad based, affecting many countries and regions.

China’s chemicals production has been negative on a year-on-year basis since February. The decline was at first because of closure of chemicals plants due to the acceleration of the environmental clean-up campaign.

But the campaign was relaxed two months ago to support economic growth and yet production still remains in negative territory. This reflects the impact on the Chinese economy of the US/China trade and Cold War and the sharp fall in credit availability.

The reduction in China’s lending remains one of the most ignored economic data sets:

Lending via the shadow banking system is now back to levels before 2009 – i.e. before the launch of the world’s biggest ever economic stimulus package. It was post-2009 that China’s chemicals demand began to see double digit annual increases as housing and finished goods sales soared.

Durable big ticket finished goods sales are now falling, including sales of autos. China’s auto sales have fallen for four months in a row, which is one of the reasons why I expect China’s 2018 PP demand growth to undershoot our earlier expectations. PP is heavily used in manufacturing autos.

The temporary backing-off from the environmental clean-up campaign is just one of a number of short-term growth-boosting strategies that have been announced by the Chinese government over the last few months.

But because of levels of debt left over from the 2009 stimulus package, a repeat of stimulus on the scale of that year is impossible.

China’s post-Global Financial Crisis economic stimulus was half the $33 trillion of total stimulus injected into the global economy. The China “put option” – that it will always come to the rescue of global growth – therefore no longer applies.

You must also take note that the Fed is firmly committed to more increases in interest rates as it is convinced that the US economy is in excellent health.

Even if the Fed did change its mind, US government debt means the US will still confront higher interest rates because of a.) The blow out in the budget deficit made worse by last year’s tax cuts and b.) The short term composition of most US Treasuries. The latest PH report adds that 28% of the $15.3 trillion US government debt is due within one year and 40% is due between 1-5 years.

The European Central Bank is facing major pressure from Germany not to repeat bail-outs of deficit-busting EU members.

Meanwhile, the EU is preoccupied with the immediate strain of the Italian budget and a good chance that in March next year, Britain will crash out of the EU with no Brexit deal. This makes coordinated EU-wide action to stem a fall in financial markets unlikely.

The animus in international relations is another reason to doubt another round of international coordination by central banks, on the scale of what we saw in 2009, to mitigate the impact of a recession. The US is engaged in a trade war/Cold War with China and has very shaky relationships with the EU and other trading partners.

With a recession seemingly close at hand, record amounts of new PE capacity – most of it new US capacity – is arriving on global markets. A we all know, if PE suffers then the whole of the steam cracker business suffers, along with upstream refining because of a reduced ability to sell naphtha to steam crackers.

The immediate task for chemicals companies and chemicals buyers is to adopt the right strategies for the remainder of this year and Q1 2019.  These strategies must, in my view, include a very cautious approach to buying raw materials.

My two scenarios for oil prices over the next year are that they will continue to decline to a Brent price of below $40/bbl or will spike to above $100/bbl on a geopolitical crisis. Demand threatens a further collapse whereas heightened US/Iran and US/China military tensions threaten a supply-driven price spike.

Even if oil rises on geopolitics, be very cautious about buying raw materials ahead of further crude prices increases because of the weak demand background. If oil prices continue to retreat this is a more transparent reason for caution.

Another key approach involves re-assessing your suppliers and customers. Some customers and suppliers may find themselves in financial difficulties as demand weakens and as global liquidity continues to tighten.

What about the long term? How bad might this recession be? This will be the subject of future blog posts.