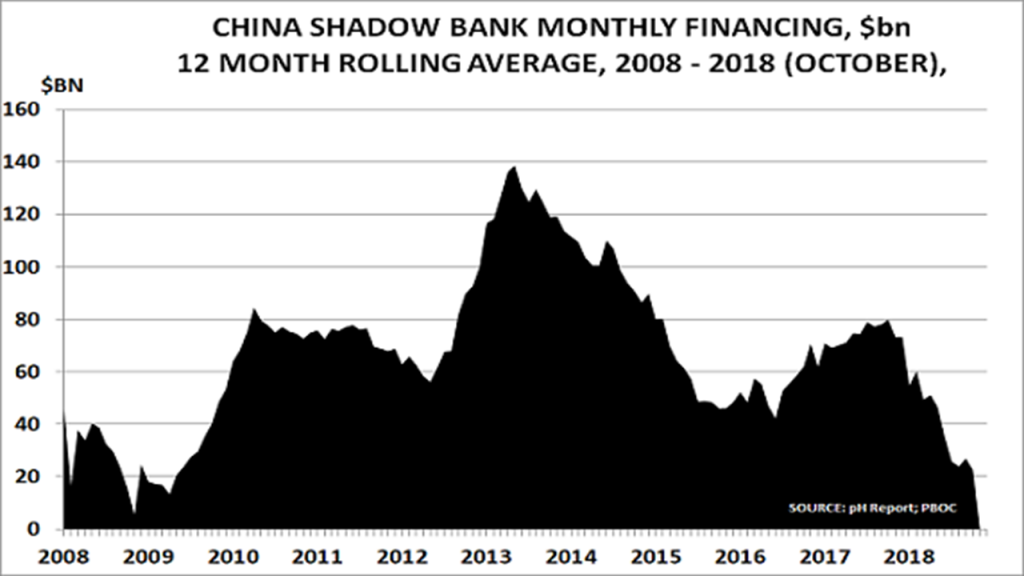 PRESERVING working capital is the key for chemicals industry purchasing managers and finance directors as we head into what I believe will be a global recession.

The problem for chemicals companies is having the confidence to ignore conventional opinion which time and again is wrong as it is so often driven by the short-term interests of equity markets.

A laser like focus is needed on the risks ahead. These risks, as I discussed last Friday, include rising US debts and the almost entirely ignored scale of the withdrawal of Chinese economic stimulus.

The above slide highlights the collapse of the highly speculative and risky shadow lending so far this year. In January-October 2018 it was down by $698bn on a year-on-year basis.

On this latter point, please remember that:

Meanwhile, as I’ve again discussed before, coordinated action by the world’s other central banks on the scale of 2009 seems very unlikely.

The trade war is obviously the other threat with Larry Kudlow, director of the US National Economic Council, today casting doubt on a deal between Presidents Trump and Xi when they meet this Friday at the G20 summit in Argentina.

I still think, however, that warm handshakes and smiles are possible and the appearance of a deal at the meeting. But if that it happens the key will be the detail. The US and Chinese positions are so far apart that is hard to see why the trade war won’t at least stay where it is in 2019, if not accelerate.

The extra problem for chemicals companies geopolitics that could undermine my belief that Brent crude prices could fall to below $40/bbl over the next 12 months.

Companies would rightly feel the need to buy raw materials ahead of further rises in oil prices because of geopolitical disruptions to supply cause by say a US and Iran military clash. Crude in these circumstances could just as easily rise to above $100/bbl.

Even in these circumstances, though, be careful about buying ahead because of the underlying weakness of the global economy – and of course the extra demand destruction in this weak economic environment caused by high oil prices.

Please be careful out there and if you need further support contact ICIS in general through me at john.richardson@icis.com

PREVIOUS POST US and China: Intellectual property rights and maybe some historical amnesia
NEXT POST G20 meeting: stakes are high for US petchems, manufacturing in general