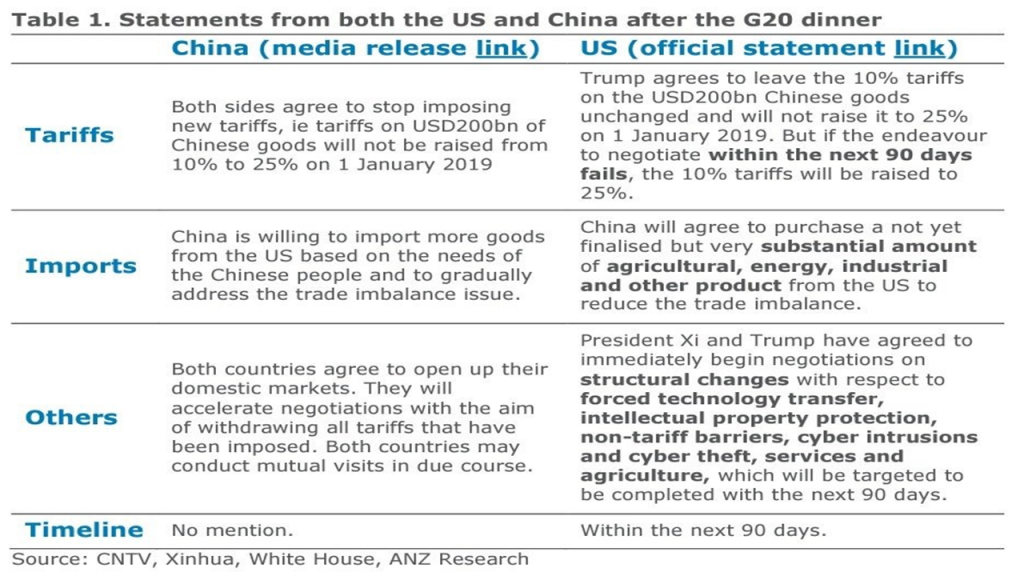 That didn’t last long, did it? But anyone paying attention to the detail, or rather the lack of it from the Chinese perspective, would have known as early as Sunday morning Asian time that the G20 deal wasn’t a deal at all. It was just an agreement to start talking again.

The above slide, based on media releases immediately after the Trump/Xi meeting, makes this point very appositely.

Nobody should have had to wait for yesterday’s Tweet from the US president and general confusion about the smiles and handshakes in Buenos Aires to know that a huge gap remains between the US and China.

One very relevant detail for petrochemicals from yesterday’s muddle was that whilst the US says that China has agreed to buy a substantial amount of US goods, including energy products, China has made no such commitment.

On Monday, before things started to unravel, a couple of my contacts were discussing the possibility that energy included PE – and that China might even lift the 25% tariffs on all grades of US HDPE and 93% of the grades of LLDPE that the US exports to China.

This would make a big difference to global PE markets in 2019, as, without access to China, the US may end up flooding other smaller net import markets such as Europe.

The 25% tariffs, along with the antipathy in the current US/China relationships which is leading domestic traders to avoid US PE cargoes, is said to have already led to a big drop in US shipments to China. The tariffs were put in place in late August.

Let’s hope that the tone of yesterday changes, and that a genuine and lasting agreement between the US and China emerges.

But until and unless this happens, your base case should remain the trade war/cold war continuing in 2019, with the possibility that it could intensify.

PREVIOUS POST G20 trade deal is no deal unless a huge gap can be bridged
NEXT POST Holding petchem CEOs to account: tackling societal needs the route to success

By John Richardson I PREDICTED that there could well be warm smiles, handshakes ...

By John Richardson IF WE all had a dollar for every time we’d heard the phrase...

By John Richardson I MADE THE argument last Thursday that until or unless the world is fully ...

By John Richardson IF YOU WANT to understand when container-freight chaos will fully come to an end,...

By John Richardson IT FEELS LIKE several lifetimes ago. If you recall, way back in November-December...