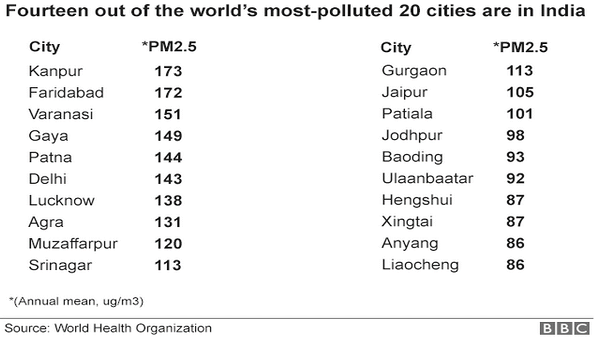 THE ten most polluted cities in the world are all in Northern India. It is therefore hardly surprising that a Lancet study found that pollution killed 1.24m Indians in 2017 — half of them younger than 70. This lowered the country’s average life expectancy by 1.7 years.

These were just some of the shocking statistics included in a December 2018 FT report on the pollution crisis in India.

WTO data provide another disturbing perspective on the crisis. As the above chart illustrates, 14 of the 20 most-polluted cities in the world are in India.

And aside from air pollution, India, as with the rest of the world, faces another problem that can be laid entirely at the door of our industry: The single use plastics-pollution crisis.

The chemicals industry can also be part of the solution to all of the above, as our industry’s goods and services can help to mitigate air pollution, and also soil and water pollution.

If we also deal with the plastics rubbish crisis by investing in collecting rubbish collection before plastics end up in the rivers and oceans, then we can make great progress. Further, the industry needs to come out fighting by demonstrating the environmental value of products such as LLDPE food packaging films in reducing methane emissions from rotting food.

And specifically on India, is there a risk that the country’s economic growth will weaken substantially if it cannot deal with its pollution challenges? What would that then mean for one of the world’s most important chemicals markets?

I will attempt to provide some answers over the next few weeks in a series of posts on the Indian economy and pollution challenges.

In short here, India is not just an ever-rising line on an over-simplistic chemicals demand-growth chart, based on the notion that “a rising middle class” means everything will turn out fine. The reality has always been a lot more complicated than this.

PREVIOUS POST China full-year lending decline confirms that Fed pause is a sideshow
NEXT POST Polyethylene production via oil and gas: The next horse and cart