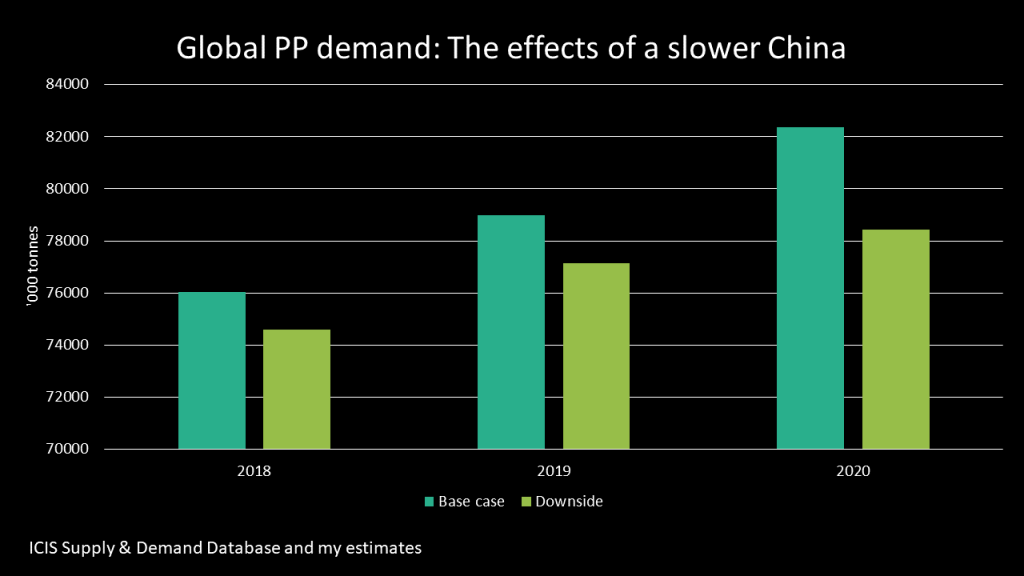 CHINA’S influence on the world economy has grown to such an extent over the last decade that is now a bigger driver of growth than the US and the EU combined, says Eurizon SLJ Asset Management.

The US impact on global GDP shrunk from just over 40% in 1989-1998 to half that in 2009-2018, adds the London-based company. The $9 trillion expansion of China’s GDP over the last decade outstripped that of the US and EU, which grew $7 trillion and $2 trillion respectively.

This won’t surprise regular readers of the blog. Ever since China launched its huge post-Global Financial Crisis economic stimulus programme, I’ve been flagging up the growing role that China has played in global growth. This has led to China playing an ever bigger role in driving worldwide chemicals and polymers growth as of course the chemicals industry is the “industry of industries”, upstream of so many manufacturing value chains. In

We must therefore consider, product by product, what the effect could be on global chemicals demand if China’s slowdown continues in 2019 and 2020.

Equally, of course, you might assume the opposite. I made half a dozen calls to senior polyolefin industry executives this week who thought that China would do whatever necessary to achieve a pick-up in growth in 2019. They all predicted a bounce back in growth from H2 this year.

But in my view the downside is higher than the upside,  regardless of whether the trade war ends, and so companies should prepare for significantly lower chemicals demand growth over the next two years.

So today, as promised on Wednesday, I have taken our base case data for polypropylene (PP) in 2018-2020 and modelled the global implications of the macroeconomic transmission effects of Chinese consumption growth being 3.4m tonnes less than we assume.

The net results you can see in the above chart. Under our base case, total global consumption in 2018-2020 is 237m tonnes. This falls to 230m tonnes under the downside, 7.2m tonnes lower when you look at the exact numbers. Average global growth slips to 3.2% from 5% with average global operating rates at 89% rather than 92%.

Plus there is the macroeconomic transmission effects described above on global PP growth. Huge as you can see and possibly even bigger.

But new regional PP investments that don’t depend on China might still be justified – for example, in Europe as I discussed with upstream propylene last week.

Maybe in many cases it won’t be  a case of building huge to meet globalised markets, but instead smaller creep expansions of existing plants. Or instead cashing in on cheap propane to build propane dehydrogenation-to-PP units, or getting hold of some spare refinery propylene, with new plants sized to fit the demands of more regional markets.

Even if my downside is wrong and all is good in 2018-2020, what I’ve just described is the long term direction of travel because China will eventually achieve complete PP self-sufficiency, perhaps as soon a 2025. Don’t assume that China won’t develop the copolymer capacity necessary to achieve this as it tries to escape its middle income trap through adding value to its economy.

There is also the risk that China fails to escape its middle income trap and its economy stagnates. That would have enormously negative implications for the global economy, as you can see from the above. But even if this very worrying outcome happens, local-for-local PP and other petchem industries would still require new investments to support local economies.

BUT getting funding for these projects will be an altogether different matter. Instead of today’s practice of rule-of-thumb estimates of multiples of Chinese PP demand growth over healthy rates of GDP growth being enough to satisfy bankers, every tonne of planned new PP capacity will have to be pre-sold. Sufficient new customers will have to be signed up.

PREVIOUS POST China autos and polypropylene: Growth has peaked and will decline
NEXT POST US PE margins have further to fall on higher production, China weakness