US PE margins have further to fall on higher production, China weakness 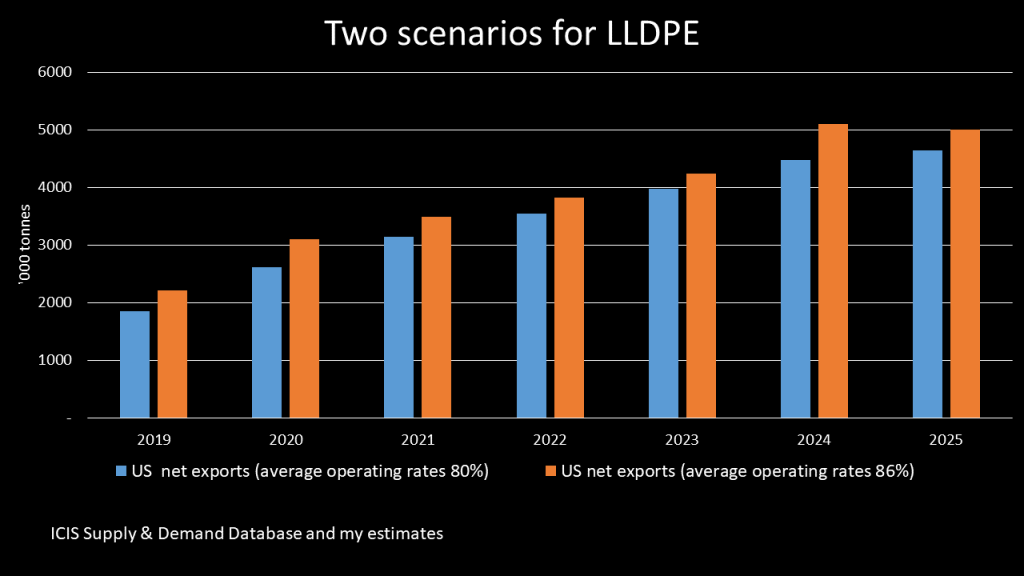 THE WORST is over for the margin depletion that’s been experienced by US PE producers in Q4 2018 and likely in Q1 this year as well, I have heard it being argued.

There are two problems with this view. Firstly, the worse can only be over if the Chinese economy bounces back. And secondly, on a standalone basis, we also have to assume that US PE producers will show operating rate discipline that’s sufficient to at least stabilise profitability.

It might seem that all will soon become good again with the Chinese economy despite all the fuss I’ve been making. This follows a record-high disbursement of new lending in January. New loans made available in China were one-third higher than the same month last year.

Shadow lending also rose for the first time in 11 months in January. This was a sign that the government is trying to support private companies as the private sector, which generates 60% of China’s GDP, obtains most of its financing from the shadow banks. Shadow lending fell by 73% in 2018 versus 2017.

This flood of new lending has strengthened the consensus view that there will be a strong rebound in H2. The theory is that it will take another few months before new stimulus boosts manufacturing and consumer spending.

But perhaps renewed stimulus will instead only prevent further declines in Chinese growth rather than deliver an upswing. The extent of the problems were highlighted by the January Producer Price Index (PPI) which grew by just 0.1%, its lowest increase since September 2016. The PPI will swing into deflationary territory in Q1, according to our Chinese PE market contacts. Once any economy swings into deflation the downward momentum can be hard to reverse.

In such an event then perhaps the Chinese government could opt for even more stimulus. I have long been arguing, though, that even new lending on the scale of 2009-2017 might fail to deliver the same boost to GDP as during those years. This is because of the extent of consumer and corporate debt and manufacturing overcapacity.

Then of course there is the trade war. The signs are good that President Trump will extend the deadline for concluding talks with China beyond 1 March. In such an event existing tariffs would probably stay in place. But the increase in US tariffs on Chinese imports from 10% to 25% might not happen.

If the trade war rumbles on this would be bad for both the Chinese and global economies. And the problem for the US PE industry, and every other industry in the world, is that global growth has become far too dependent on China.

China is now a bigger driver of growth than the US and the EU combined, says Eurizon SLJ Asset Management. The US impact on global GDP shrunk from just over 40% in 1989-1998 to half that in 2009-2018, adds the London-based company. The $9 trillion expansion of China’s GDP over the last decade outstripped that of the US and EU, which grew $7 trillion and $2 trillion respectively.

From a macroeconomic perspective, I don’t think it is therefore reasonable to assume that the fall in US PE margins is inevitably over.

US PE tariffs look likely to remain in place

As things stand today, the most likely outcome is that Chinese tariffs on LLDPE and HDPE will stay in place for at least another few months. President Trump, as mentioned above, has given strong indications that the deadline for concluding trade talks will be extended beyond 1 March.

At the very least, therefore, this would mean that US shipments to China would continue to carry the 25% tariffs that China imposed from late August last year.

The tariffs led to a steep fall in US LLDPE and HDPE exports to China in September-December last year. The US made up lost ground by raising exports to Southeast Asia (SEA). SEA producers responded by raising their shipments to China.

But the rise in new US PE production has yet to peak, according to our  excellent Supply & Demand Database analysis. US producers therefore face a choice in 2019 of either:

This another set of reasons why the fall in US margins may continue.

The only end-use market for ethane is petrochemicals and large new quantities of ethane will have to be disposed of as shale-gas production continues to increase. Only a limited amount of ethane can be left in methane before methane is transported by pipeline.

Some return on investment is also better than no return at all. US PE producers may decide to run their plants hard because whilst PE margins may not be covering full costs, at least variable costs could be covered. We saw the same dynamic in US shale oil in late 2014 when oil prices collapsed.

This leads us on to the chart at the beginning of this blog post, where I focus only on LLDPE:

This last set of data tell us that never before has the US PE industry taken such a big bet on strong global PE demand growth and fully open, fully globalised PE markets. It is a bet that may or may not pay off.