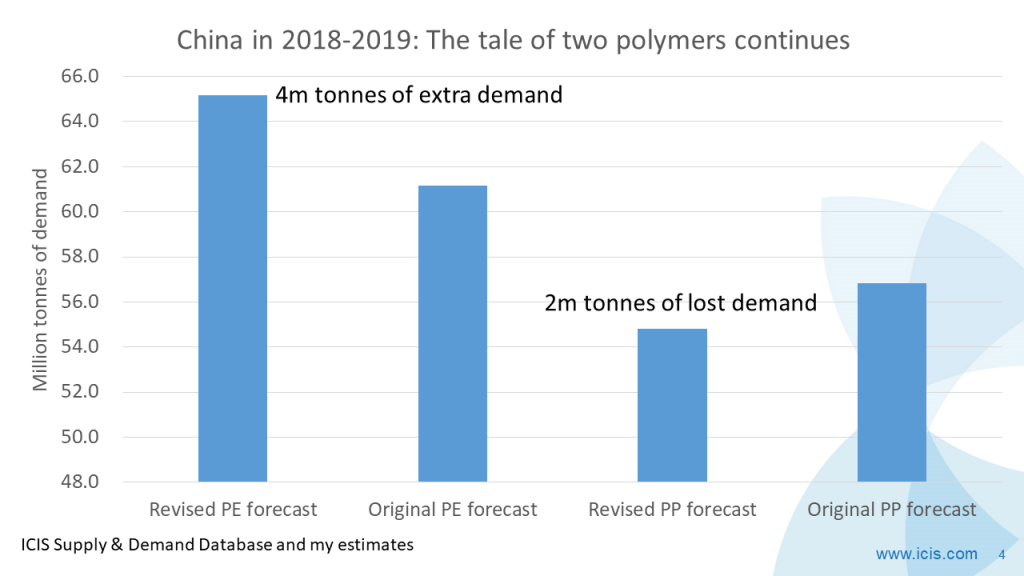 CHINA’S polyethylene (PE) and polypropylene (PP) markets continue to tell us something very important about the broader economy.

In PE, Q1 net import and production data when annualised for the full-year 2019 implies demand growth of 11% over last year. This would be even higher than in 2018, when consumption compared with 2017 increased by 9.2%.

If you add my revised estimates for 2018-2019 PE demand together, this equals 4m tonnes more than the original forecasts in the ICIS Supply & Demand Database.

Sure, there may well be some overstocking in PE that could result in final 2019 growth being lower than 11%. High inventories probably explain sluggish PE pricing in China. Excess inventories might take 3-4 weeks to work off, is the view of some industry observers.

But this still looks set to be another banner year for Chinese PE demand because of continued rapid growth in online sales that are often packaged in PE.

Internet sales are this year being boosted by government investments in new sales platforms and in better connectivity in the poorer inland provinces. This is providing cheap daily necessities, such as food, to people on low incomes.

In the rich provinces, buying restaurant food for home delivery, again via the internet, is proving ever-more popular. The food is again often packaged in PE. General online sales growth in rich China is also likely to be very strong this year, especially of cheap essentials and non-essentials.

This tells us that Chinese government’s efforts to rebalance the economy towards consumption and away from investment is being successful in the area of online sales.

The cheapness and convenience of buying goods online resulted in strong consumption growth in 2018, despite the slowdown in GDP. The pattern will continue this year, regardless of the strength or weakness of GDP.

PP, though, continues to struggle. The problem for PP is that its end-use applications are more heavily weighted toward durable “big ticket” or expensive consumer goods than is the case with PE.

This points to total PP consumption in 2018-2019 being 2m tonnes less than we had forecast.

The latest data on PP further underlines why headline growth in credit in Q1 – Total Social Financing – is misleading. Dig deeper and real lending growth was anaemic during the first quarter, as most of the extra lending went to help heavily indebted companies service their bad debts. In other words, little of the new lending went into new economic activity. 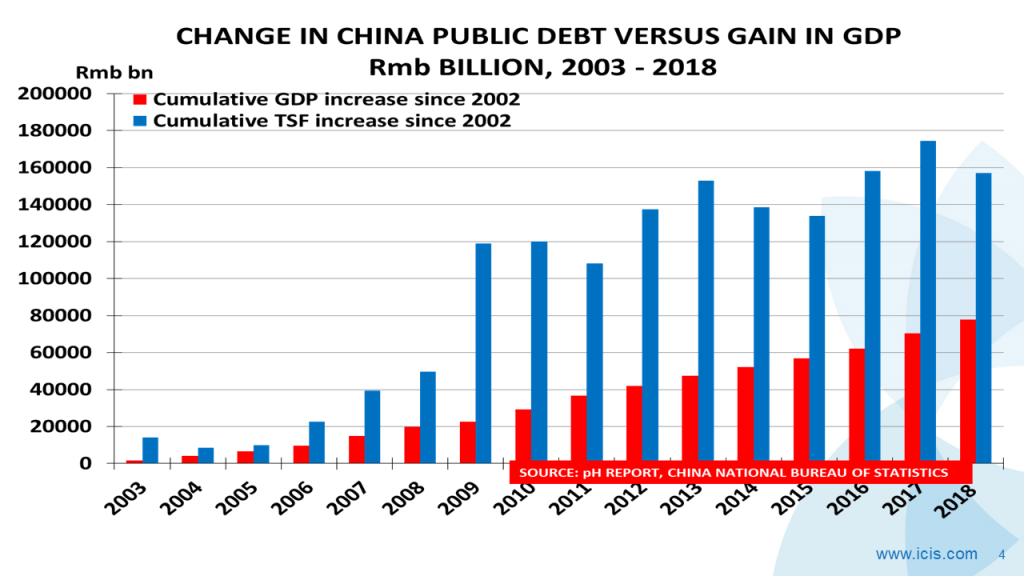 This explains why credit availability for “big ticket” or expensive consumer goods such as autos remained relatively tight in Q1. An indication of this tightness was the 11.3% fall in auto sales during the first quarter.

PP demand may bounce back, making my 2% estimate for 2019 too pessimistic. There is a lot of talk out there about how Yuan 2 trillion worth of VAT and other tax cuts will boost sales of big ticket items, including autos.

Auto makers have lowered the cost of vehicles following the reduction in VAT charged to all manufacturers, leading to predictions of a rebound in car sales in H2.

But the tax cuts mean less revenue for provincial governments. This will hit the heavily indebted poorer inland provinces especially hard. Infrastructure projects might end up being cut back, along with plans for new manufacturing capacity.

On a net basis will the tax cuts deliver any benefits? The jury is still out on this key question.

Another unknown is the trade war. Will it end or will the tough terms being demanded by the US result in the dispute dragging on?

If the trade drags war on, China might decide to well and truly open the stimulus floodgates. But as the underlying Q1 lending data and as the tax cuts versus spending cuts debate demonstrate, opening the floodgates would have a much more limited beneficial effect on GDP than ten years ago – before China embarked on its debt binge. The chart below further confirms this point.

Even in the event of a trade deal being reached, this may not mean anything more than a temporary sentiment-driven turnaround in big ticket consumer sales. The reason is that a deal would give Xi Jinping and his fellow reformers the economic leeway to reduce the availability of new lending later on this year, in order to deal with the bad-debt crisis.

Q1 demand growth for other polymers that go into big ticket sales – such as acrylonitrile butadiene styrene and high-impact polystyrene (HIPS – was also disappointing. But, like PE, general-purpose PS and polyethylene terephthalate film grade appear to have done well, because they are again heavily used in packaging cheap goods sold online.

Meanwhile, styrene butadiene rubber (SBR) is having another bad year because of the weakness in the auto market. The main application for SBR is in tyres.

Steam cracker complexes are of course mainly built to make downstream PE. But, despite the strength in Chinese PE demand, cracker margins continue to retreat, mainly as a result of weaker aromatics and butadiene co-product sales – the result of poor demand for ABS, HIPS and SBR.

I’ll provide you with an update on cracker margins and an outlook for future margins in a later post.