By John Richardson on 6th May 2019 in Business, China, Company Strategy, Economics, Olefins, Polyolefins, US
SHARE THIS STORY 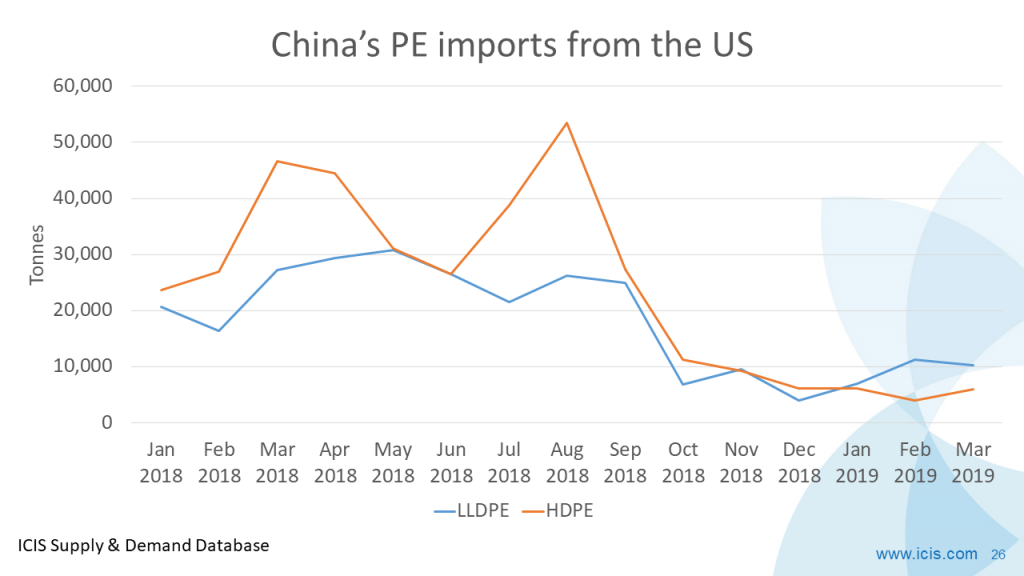 THE PROSPECTS of a trade deal seem to have have faded into the distance as a result of Tweeted threats from President Trump that the US will raise tariffs to 25% from 10% on $200bn worth of Chinese imports, including several chemicals and plastics. The increase would happen on Friday, he said.

The president, by Tweet again, also threatened to expand the scope of tariffs by imposing 25% duties on an additional $325bn worth of Chinese imports. He did not specify the products or the timeframe for any additional duties.

This has blindsided Chinese negotiators scheduled to visit Washington this week for continuation of the trade talks, according to the Wall Street Journal (WSJ). China is as a result considering cancelling this week’s talks, adds the WSJ.

The president may have decided that because the US economy appears to be booming, he can afford any negative impact from protracted talks, or even a complete breakdown in negotiations.

The president is also under domestic pressure not to sign a deal that fails to address issues such as China’s state subsidies for local companies. Richard Trumka, America’s top union leader, last week warned about the risks of an “inferior trade deal”. Unless the president retains blue collar votes in the mid-west, he will struggle to win re-election.

Resolving long-term deep-seated differences between the US and China would take an awful lot more negotiations (that’s if they can be resolved at all).

A delay in any trade deal until at least early 2021 has now, as a result, become a stronger possibility – after the election is out of the way. Let’s next look at some of the implications of this outcome.

The above chart shows the steep falls in US linear-low density polyethylene (LLDPE) and high—density PE (HDPE) imports by China from the US since the end of last August, when China imposed 25% duties on US shipments as part of the trade war.

In LLDPE, the US has been able to compensate for weaker China shipments by raising exports to Europe. I estimate that the US could export some 855,000 tonnes of LLDPE to the main European import markets for the full-year 2019. This would compare with actual 2018 imports of 692,177 tonnes.

This preliminary estimate is bound to be wrong as it is based on limited actual 2019 trade data, but it does give the direction of travel. It seems likely, also, that the US will have raised exports of LLDPE to other markets to make up for lost ground in China. The same story is likely to have occurred in HDPE.

In a global economy that’s doing well, the last thing we need is for the trade war to drag on and on. There is obviously a risk that this will dampen economic growth and thus the ability of the US to place the big rise in its PE production.

Further, if the trade war were to continue and if the US/EU trading relationship were to also deteriorate, the EU might follow through on its threat to impose tariffs on US PE. In such circumstances, the US would have no choice but to pay the EU tariffs as it could not afford to lose big volumes in both the EU and Chinese markets without having to cut back on production

Thirty to forty percent of the polypropylene (PP) that China imports is re-exported as finished goods, says an industry player. If US tariffs on Chinese imports to 25%, heavily affected will be finished goods containing PP.

This would be a further negative for a Chinese PP market where growth may fall to as low just 2% this year, from 4.7% in 2018, because of persistent weakness in the autos market.

“I don’t see any recovery in auto sales this year, unlike some analysts who are predicting a rebound in H2,” said the industry player. “Auto sales are a good gauge of overall sentiment as people in China tend to buy new cars and houses when the feel confident. A longer trade war would obviously hurt confidence”.

If the trade war does drag on, this might, though, lead to more stimulus by the Chinese government. But the effectiveness of the stimulus would be very limited because of the scale of bad debts. The upshot of the trade war lasting well into H2 could as a result be a slowdown in Chinese GDP growth.

By John Richardson DONALD TRUMP insisted in early March that he was willing to w...

By John Richardson THE STRENGTH of China’s position in the intensifying trade ...