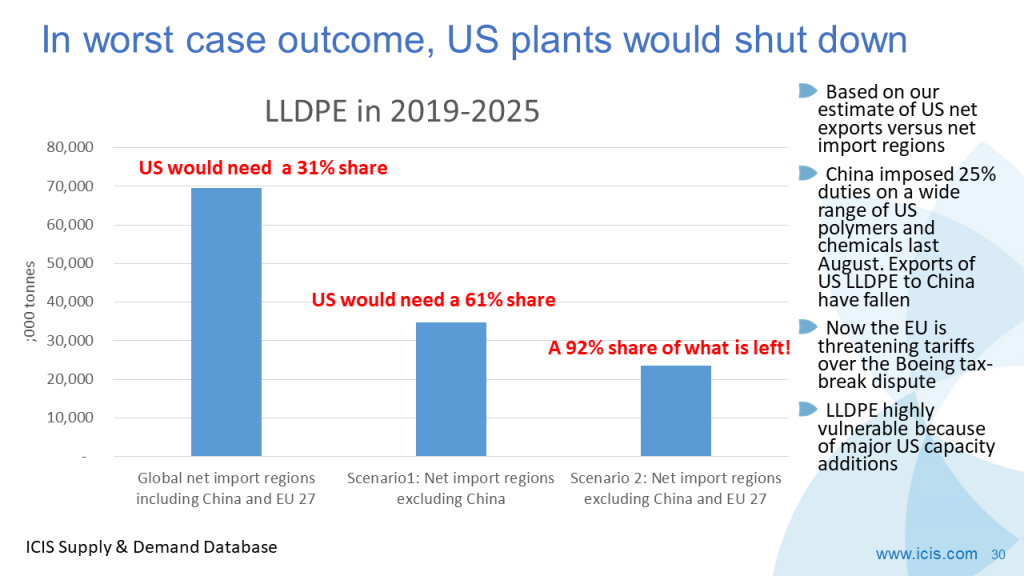 DONALD TRUMP insisted in early March that he was willing to walk away from a bad trade deal with China. But it now appears that the US is prepared to water down its demands in the interests of getting a deal done. The above chart helps to explain why.

The first bar on the extreme left of the chart shows our estimate of total global LLDPE net imports for regions in net import positions in 2019-2025. I then took our assumption of US net exports during the same years. Divide the net exports with the net imports and the result is the US would need a 31% market share.

Scenario 1, the second bar to the right, shows that the US would need a 62% share of the global net import market without China – assuming US production remained unchanged (I will deal with Scenario 2 later on).

Eleven years ago, the US would have been under less pressure to make compromises in the trade war that has led to a sharp fall in its LLDPE exports to China.

But in 2009, China became the world’s biggest consumer by volume of LLDPE, overtaking the US and the EU. In 2009, China accounted for 21% of global demand but last year this increased to 32%. This led to a big increase in China’s import requirements in 2009-2018.

In 2018 in particular, China’s imports surged because of heavy restrictions on imports of scrap PE and booming demand for packaging of online sales. Net LLDPE imports were at around 4.7m tonnes in 2018, 45% higher than in 2017.

Many people thought, including me, that this represented substantial overstocking. But LLDPE net imports were very strong in Q1 of this year. If the Q1 trend continued throughout this year, China’s full-year 2019 net imports would be at 5.7m tonnes – 21% higher than in 2018.

Combine this estimate for net imports with Q1 Chinese production – again annualised – and full-year 2019 LLDPE demand would rise by 15% to 13.3m tonnes compared with last year. This would follow a 13% rise in 2018 over 2017.

US LLDPE exports to China have fallen very steeply since last September following the imposition of 25% duties by China as part of the trade war. This is terrible timing for the US LLDPE industry because it is undergoing a big wave of capacity expansions.

China has also imposed 25% tariffs on a wide range of other US chemicals and polymers, including high-density PE, ethylene glycols and methanol, where, again, major capacity additions are taking place.

China’s dominant position as the world’s biggest consumer and importer of energy, petrochemicals and agricultural products gives it strong leverage in trade talks.

The US dispute with the EU over subsidies for their respective airline manufacturers, Boeing and Airbus, stretches back to 2006. This was of course long before today’s “America First” approach to international trade.

But America First has led to heightened trade tensions, likely contributing to the EU investigation into imposing tariffs on the US over the airline dispute. The EU will conclude a public consultation process at the end of May on $20bn worth of proposed tariffs. Products identified include PE, polyvinyl chloride, polycarbonate and polyethylene terephthalate (PET).

As with China, Europe is in a strong position in LLDPE because it is a major importer with plenty of options to source its requirements from countries and regions other than the US. If it went ahead with tariffs that made US shipments largely unviable, Europe could simply buy more from the Middle East.

If the US was only excluded from the China LLDPE market, then perhaps US producers would not have to cut back their operations. Producers elsewhere would, though, be under severe pressure as US material flooded Europe, Turkey and Southeast Asia.

But without China and Europe – Scenario 2 on the above chart – US plants would surely have to shut down as the US would need a 92% of the remaining global market. This is again based on our current estimate of US LLDPE production in 2019-2025.

Next take a look at Chart  3 in a new European Central Bank (ECB) study. The chart shows that Chinese tariffs have been heavily targeted at US agriculture and chemicals. As I’ve just demonstrated, this is the right tactic because these are very important sectors for the US economy.

The EU seems to be following the Chinese lead by identifying US PE and other petrochemicals as a target for tariffs.

In agriculture, the EU may also follow the Chinese lead. US exports of agricultural products to the EU totalled $13.5 billion in 2018, according to the Office of the United States Trade Representative. The EU was the third-biggest US agricultural export market. Leading categories included soybeans, tree nuts, wine and beer and processed food.

Broadening the perspective to the effect on overall economies, the same ECB study finds that after another year of trade tensions, US GDP growth would be 2% lower than the ECB baseline. Euro growth would be unchanged and Chinese growth slightly higher because of its ability to find trading partners to replace the US.

Durability of any trade deal under threat

The economic pressures on the US appear to have led to compromises in their trade talks with China – for example,  dropping of allegations of cyber theft. It also seems likely that the US will park demands that China abandon state subsidies for local companies.

This is great news for the chances of a short term deal. But would a deal which failed to address fundamental, long term differences hold? Probably not. It could so easily unravel, leading to a resumption of the trade war.

What about the US-EU relationship? Let’s hope that EU plans to buy more US energy products point to a resolution of this dispute. But there are no guarantees given the dramatic shift in the US approach to international trade.

President Trump's Tweets increase risk of no trade deal until 2021

By John Richardson THE PROSPECTS of a trade deal seem to have have faded into th...