Vietnam PE demand booms on trade war, but for how much longer? 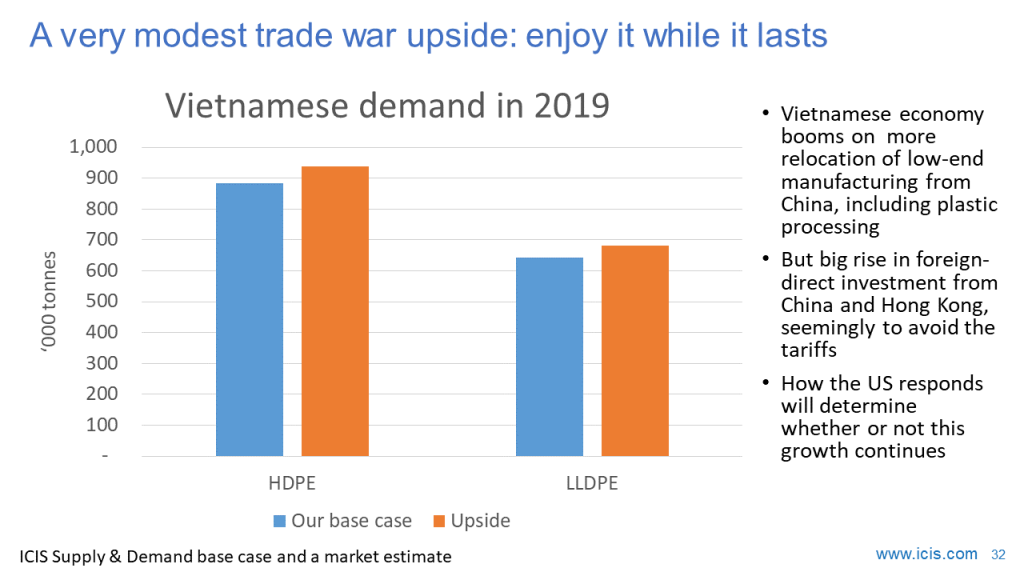 GLOBAL manufacturing supply chains are adjusting to the US tariffs against China, accelerating a process that began a decade or so ago because of China’s ageing population versus more youthful populations elsewhere.

Let’s use Vietnam as an example to first of all examine the longer term drift away from China. Since 2010, Adidas has reduced the share of footwear it makes in China by 50% as production has shifted to Vietnam. The same applies to Nike. Ten years ago, China was its main footwear producer, but now it is Vietnam.

Here are some key statistics on demographics in China versus Vietnam:

It is the simple law of supply and demand. There is an oversupply of young people in the developing world ex-China willing to make plastic bags, rolls of film, TVS and refrigerators for low wages. In China, there is an undersupply.

And, as I said, the trade war is accelerating relocation of manufacturing as US tariffs on Chinese imports have further eroded China’s competitiveness.

One of the US objectives of the trade war is to re-shore low-value manufacturing back to economically struggling regions such as the US midwest. But the US has an undersupply of young people because its population is ageing.

China, Vietnam and the US – implications for polyethylene

Vietnam’s trade surplus with the US increased 45.5% year-on-year to $13.5bn in Q1 2019, according to the FT. Vietnamese exports to the US have surged in products such as headphones and earphones, wooden furniture and clothing and footwear.

The fall in Chinese clothing exports to the US, because of the tariffs, explains why China mono-ethylene glycols spreads over naphtha are in negative territory for the first time in five years.

Paraxylene profitability in China is also weak, and is likely to weaken even further, as a result of US tariffs on Chinese apparel and non-apparel exports. In clothing alone, the US accounts for 17% of all Chinese exports.

Meanwhile, though, chemicals demand in Vietnam is booming. Let’s look at polyethylene (PE). Low-end plastic processors are moving in greater numbers from Vietnam to China to avoid the US tariffs on Chinese shipments of plastic products.

PE imports saw a big increase in Q1. This is a perfect proxy for demand as Vietnam has no domestic production.

This included a big rise in imports of US high-density PE (HDPE) and linear—low density PE (LLDPE). If you look at the period from September 2018 until March 2019, US shipments to Vietnam exceeded those to China.

Since last August, US HDPE and LLDPE exports to China have carried 25% import duties as part of the trade war. This has led the US to seek markets other than China, including Vietnam and the rest of Southeast Asia.

Cheap plastic films and bags, made from  somebody’s PE, are then being shipped from Vietnam to the US under the tariff barriers.

“It takes just two months to set up a basic plastic conversion facility in Vietnam and we’ve seen a big shift in production since the trade war began,’ said a polyolefins industry source.

“We are likely to see the process speed up considerably now that it looks like the trade war will drag on for the rest of this year,” he added.

Relocated Chinese manufacturers may be targeted

This could be great news for the overall Vietnamese economy which we estimate will see GDP growth of 6.8% in 2019 versus 7.1% last year.

Perhaps growth will be higher than 6.8%. Foreign –direct investment from Hong Kong and China to Vietnam was at $2bn during the first four months of this year, according to Deutsche Bank. This compares with around $400,000 during the same period last year.

“China’s investment in Vietnam includes sectors such as energy, construction, manufacturing, and property. Ongoing trade wars may make the January-April figures a major trend in the coming years, in our view,” said Deutsche Bank.

“PE Demand seems to be growing at around 14% thanks to the bigger inflow of imports,” said a second polyolefins industry source.

But here’s the thing: Quite a few of the converters that have relocated from China to Vietnam are reported to be under Chinese ownership.

What if this is seen by the US as merely a re-routing of Chinese exports in order to avoid the tariffs? As the FT reports, Mexico’s exports to the US overtook those of China for the first time in March. Some of the Mexican exporters are again said to be under Chinese ownership.

In its mission to tackle what it sees as unfair Chinese trading practices, and halt the geopolitical rise of China, the US might as a result go after relocated Chinese manufacturers.

Donald Trump also wants to re-shore low-end manufacturing jobs to the US and get rid of the overall US trade deficit. Neither of these objectives will be achieved if US imports merely shift from China to other developing countries.

But an ageing population in the US versus youthful populations in the developing world creates a creates a dilemma. Unless the US puts a giant and global tariff wall around its entire economy it won’t be able to bring a big number of manufacturing jobs back home.

The danger is that this would do the same thing to the global economy as the 1930 Smoot-Hawley Tariff Act. Sadly, this is no exaggeration. This is the scale of the risks ahead.

A least, though, let’s enjoy the  moderate good news while it lasts. Lost tonnes of chemicals demand in China should be partly replaced by tonnes gained in other developing markets.

Forecasting what happens next therefore depends largely on analysis of only one thing: Politics.

This is easier said than done and will require a lot of effort. But you don’t have any choice. You have to make the commitment as the old plain-vanilla forecasting methods no longer work. You can no longer draw straight upward lines depicting constantly rising growth.