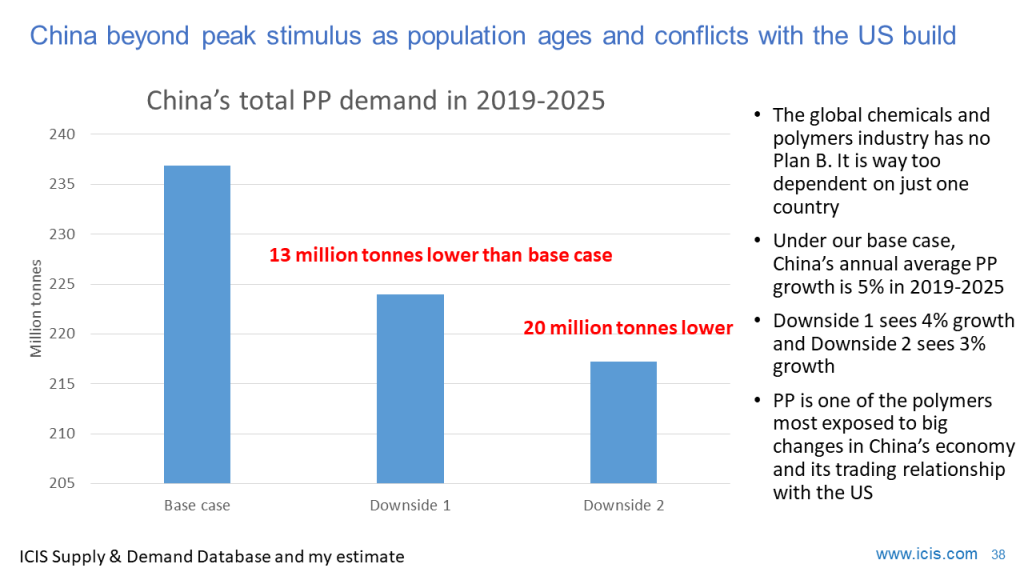 THE CHANCES of some kind of trade deal have edged a little higher following the announcement that President Trump will have an extended meeting with President Xi at the G20 meeting in Japan later this month. They will not just pass each other in the corridor and shake hands during a group photo shot, as had been feared.

A deal over the next weeks and months, or at least a ratcheting-down of tensions, would suit President Trump as he has just formally launched his re-election campaign. And of course Xi is anxious to shore-up economic growth.

But a deal wouldn’t make much difference beyond an immediate bounce in market confidence as it seems unlikely that all the US tariffs against Chinese imports will be rolled back. The US wants to keep tariffs in place as a means of making sure China sticks to the terms of a deal. At least, though, $300bn worth of additional tariffs on US imports of Chinese goods threatened by Trump wouldn’t go ahead if an arrangement is reached.

A deal would also quite obviously do nothing to ease China’s longer term economic problems. Neither would it resolve the drift towards a bi-polar world because of the deep differences between the US and China over trade, economic growth models, technology and geopolitics.

China has run out of the ability to significantly re-stimulate its economy. The first five months of this year demonstrated this. Increases in Total Social Financing (a broad measure of the availability of Chinese credit) did not greatly add to economic activity as most of the extra funds were used to pay-down debts.

The provincial governments are very heavily indebted as they have carried the bulk of the burden of economic stimulus since 2009. This has left them with unsustainable debts at an eye-wateringly high level. Local governments have accumulated Yuan 19.1 trillion (S$2.8 trillion). And this doesn’t take into account hidden debts of an entirely unknown quantity.

Local government funding would perhaps be fine, even with the negative effect of the tax cuts, if they could depend on a continued increase in the volumes and prices of land that they sell. China’s real estate bubble has helped their financing.

But here’s the thing: The central government’s Yuan 2 trillion reduction in shadow-bank lending over the last two years will not be reversed because of what it admits are unsustainable levels of household debt. Most of that debt has been wracked-up via the property sector which gets most of its financing from the shadow banks.

The best outcome we can hope for is a gradual release of air from China’s property bubble. This would mean not only lower returns for local governments from land sales, but also less creation of new personal wealth. There is a tail risk of something much worse, especially if the trade war continues.

Meanwhile, China also faces a rapidly ageing population – a subject that continues to be largely overlooked by most analysts:

There is a broad consensus amongst Democrats and Republicans that enough is enough. China’s economic and geopolitical rise needs to halted, they believe. This is a multi-generational shift that will well outlast the Trump administration. This about the US place in the world. It is about maintaining the US status as the No1 Superpower.

The shift in the US approach has come at the worst possible time for China as it is struggling to deal with its post- peak stimulus economy and its ageing population.

Without the US as a partner it has to push much harder towards building alliances with other countries in order to outsource its lower-value manufacturing and obtain the oil, gas and safe food that it needs to maintain its economic growth. But the process for China will not be smooth, regardless of whether or not a trade deal is done.

Either 20m tonnes or 13m tonnes of lost PP demand

We must therefore plan for lower-than-expected chemicals and polymers growth, regardless of whether a trade deal is reached or not over the next few weeks and months. Let’s US polypropylene (PP) as an example here, as it is one of the polymers where growth is already struggling because of all the above trends. And let’s again use the years from 2019 until 2025 to illustrate the scale of the potential downsides for growth in China.

But far worse outcomes are possible. Under my first alternative scenario, a trade deal is reached resulting in some easing some of the short term trade tensions between the US and China.

But this would not, as I said, resolve long term US and China differences. Neither of course would a trade deal do anything about China’s lack of capacity to stimulate its economy. China’s population will continue to age, accelerating the drift of lower-value manufacturing away from China.

Under this scenario, 2019-2025 annual average growth is at 4%. Total consumption is 13m tonnes less than our base case.

My second alternative outcome sees no trade deal as tensions between the US and China significantly increase in 2019 and 2020. The impact of debt problems and an ageing population are more severe than under my first scenario. Growth averages 3% in 2019-2025 and totals 2om tonnes less than our base case.

These are enormous differences which yet again reflect just how vulnerable we are to events in China. Statistically speaking, no other country or region comes anywhere close to being as important as China.