Home Blogs Asian Chemical Connections Global polyethylene: Supply is not the problem, it is demand

Global polyethylene: Supply is not the problem, it is demand 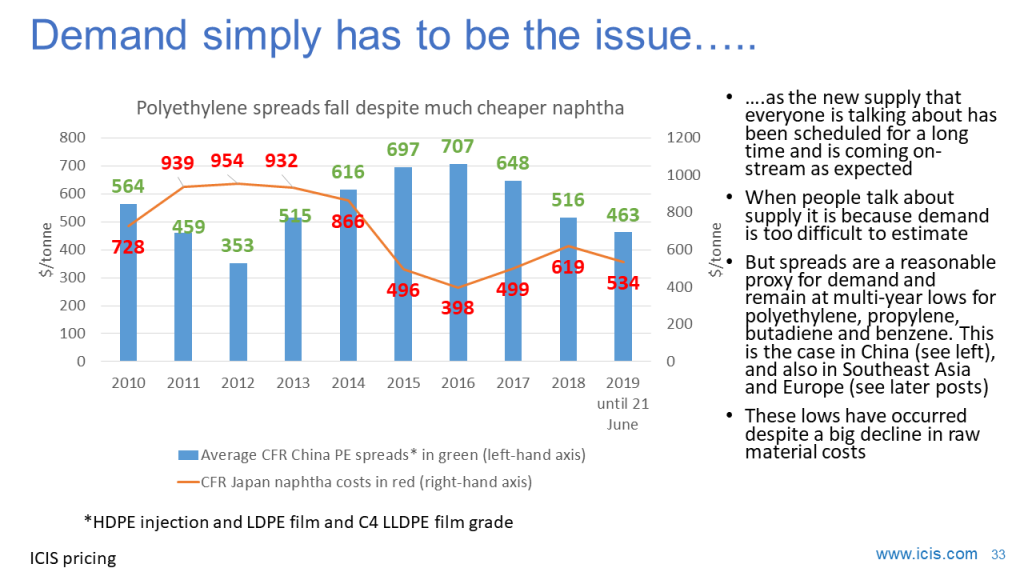 WHEN people talk about supply it is very often because it is much easier to quantify than demand when, in fact, it is demand that’s the real problem.

This is the case today in the global polyethylene (PE) market where the focus is on the big slug of new US supply hitting the market in 2019 and 2020. A substantial amount of new capacity is also due on-stream in China, Russia, India and Malaysia.

The headline numbers appear to be daunting. Around 4.6m tonnes of new capacity is due to come on-stream this year, adding 3.8% to global capacity. For 2020 the increase is forecast at 8.5m tonnes, a further 6.9% addition, according to the ICIS Supply & Demand database.

Specifically in China, the world’s most important market, the mood last week remained subdued because of the addition of 900,000 tonnes of new local capacity in 2019, most of it in H2.

Measuring supply is the easy bit. In contrast, demand is devilishly difficult to assess because PE feeds into so many different end-use markets. In order to produce a reasonably good analysis of demand you need to estimate consumption into all of its very diverse end-use markets.

Some market players therefore don’t bother with demand because it is so difficult. But they still need to talk about something. So they talk about supply.

Spreads tell us that demand is weak

The old-fashioned approach of looking at spreads does, however, serve as a reasonable proxy for demand. Spread analysis in general continues to give us the best view of market conditions.

Spreads between PE and naphtha in China remain at their lowest level since 2012 as the chart at the beginning of this blog post indicates.

Look at the difference in naphtha feedstock costs. In 2012, naphtha cost $954/tonne CFR Japan which largely explains why spreads were just $353/tonne. So far this year naphtha has cost just $534/tonne CFR Japan but spreads have fallen to $463/tonne. So of course something must be wrong with demand.

Our forecast of average Northeast Asian (NEA) PE operating rates, which includes China, is 85% for the full-year 2019. This is quite healthy and much better than 2013 when rates were at 82%, with spreads $52/tonne better than than they are today.

This tells us that if things continue as they are actual 2019 NEA operating rates will be lower than 85%. Weak demand will force cracker-to-PE complexes to the right of the production cost curve to produce less than we have forecast.

Note that the 85% takes into account all the scheduled increases in production that everyone is complaining about. There is nothing unusual about how events have turned out this year – there have been no early start-ups.

The fact that NEA producers are likely to run at operating rates lower than we anticipate yet again confirms that the real problem is demand and not supply.

Other spreads are also very helpful. In the co-products made in big volumes by liquids crackers – propylene, butadiene and benzene – China spreads over naphtha are at multi-year lows. In benzene, spreads remain at their lowest level since 2001.

It is exactly the same pattern for PE and major co-product spreads over naphtha in Southeast Asia and Europe as future blog posts shall indicate.

One of the big problems with PE demand is politics. The comfortable post-Second World War consensus that globalisation is good has come to an end.

The biggest evidence so far of this new era is the US decision to launch trade, technological and geopolitical wars against China.

The trade war could well come to a temporary end following the G20 meeting at the end of this week, when President Trump is due to hold discussions with President Xinping. A deal would improve Trump’s re-election prospects (watch out for a later post).

If this happens PE markets worldwide will bounce back. PE spreads over naphtha will improve as converters acquire more resins. New supply will all of a sudden not feel like such a heavy burden – confirming, once and for all, that the real problem had been demand.

Sadly, though,anti-globalisation is going to last a good many more years with further major negative implications for PE demand.