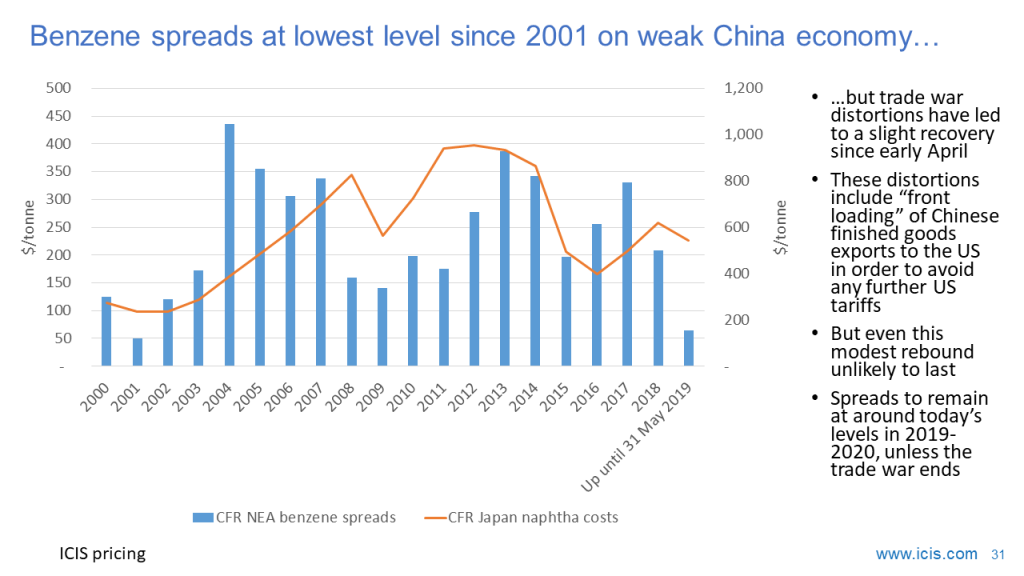 THE ABOVE chart is again telling us something very important about the real state of the Chinese economy. It shows Northeast Asian (NEA) benzene pricing spreads over naphtha feedstock costs, (NEA pricing is in effect a China price as of course China dominates the NEA region).

Dr Benzene, as with Dr Copper, is one of the best leading economic indicators because it is ultimately used to make so many finished goods.

What you can see from the blue bars and the left-hand axis is that benzene spreads in 2019, up until the end of May, averaged just $64/tonne over the costs per tonne of naphtha. This was the lowest level since 2001 when spreads were at $51/tonne.

Also significant is the red line and right-hand axis, detailing actual naphtha costs. This tells us that this year’s weakness in spreads is not do with expensive naphtha. So far this year, naphtha costs have averaged $542/tonne CFR Japan, and, as I said, spreads have been at just $64/tonne.

Let’s compare this with 2011. In that year, naphtha was at $939/tonne CFR Japan but benzene spreads were reasonably healthy at $175/tonne. During several years since 2000, benzene spreads and naphtha costs have been higher than in 2019.

Why are benzene spreads so weak, then? The answer lies largely in poor demand for the finished goods made from the polymers that require benzene as one of their raw materials.

Jim Fitterling, CEO of Dow Chemical, said during this week’s American Chemistry Council meeting in Colorado, the US: “The consumer has pulled back on big-ticket items – cars, housing and consumer- electronics. That’s where you see most of the slowdown. Day-to-day consumables are holding up well.”

He was referring to a global slowdown. Specifically in China, this is a trend I first identified in H1 last year.

The difficulty for benzene is that its downstream polymers, such as acrylonitrile butadiene styrene (ABS), high-impact polystyrene and expandable polystyrene when used for insulation materials, predominantly go into “big ticket” consumer goods. There has been a major slowdown of these sales in China.

In 2018, weakness in sales resulted from lack of availability of new lending and the trade war. Today, the continuing slowdown is down to the government’s limited ability to re-stimulate the economy because of the big extent of bad debts. And since early May, the trade war has become a lot worse.

“You don’t buy a car, and certainly not a house, when you lack credit and are worried about the economic future. That’s the mood in China today,” said a Hong Kong-based aromatics trader.

In the key autos market, sales in April were down by 14.6% on a year-on-year basis. China’s auto sales will be at best flat over 2018 and could very easily decline again. Sales in 2018 fell for the first time since the early 1990s.

Another problem for benzene is a big capacity build-up in China to serve a substantial increase in downstream styrene capacity.

This year, benzene capacity will be 3.6m tonnes more than demand, the largest excess over demand since 2014. In styrene, China will move much closer to self-sufficiency, with capacity only 1.m tonnes short demand versus 2m tonnes in 2014.

Benzene has also become a major disposal problem because of the big increase in China’s paraxylene capacity. As a co-product of PX via reformers and toluene disproportionation units, the PX players are forced to produce benzene in order to make their PX, even when benzene spreads are in the doldrums.

Making matters even worse has been a big surge in benzene imports (see the end of the next section for the details). South Korea has been forced to export more to China in January-April this year compared with the same months in 2018 because of lack of US arbitrage.

Relatively, though, things have improved

In the first week of April spreads turned negative for the first time since February 2009, which was during the Global Financial Crisis. Since then, spreads have moved back into positive territory and have improved during every week up until end-May.

This is the result of stronger Chinese apparent demand (net imports plus local production) for benzene derivatives. This is mainly down to increased derivative imports:

Another positive was in benzene itself where April imports were down by 17% to 257,806 tonnes compared with the previous month.

But the improvement is only temporary and here is why

The modest recovery in benzene spreads is, ironically, is the result of distortions to styrene and styrene derivatives trading patterns caused by the trade war.

China imported just 10,000 tonnes of styrene from the US during the first four months of this year compared with more than 64,000 tonnes during the same period in 2018. The reason is obvious: US styrene has been hit by both 25% antidumping duties and 25% trade-war tariffs.

This has forced US styrene producers, which are heavily dependent on exports because of weak domestic demand, to raise their exports to other destinations. The Q1 trade data from the US shows big year-on-year increases in US exports to Europe, India and South Korea.

Very competitive US styrene, because of low US ethylene costs resulting from the shale-gas energy revolution, have resulted in other exporters losing market share in Europe and India etc. These other exporters have only one other major outlet and that of course is China because it is the world’s biggest styrene import market.

This seems to be behind big increases in Chinese imports of styrene from Saudi Arabia, Europe, Singapore and Taiwan. In the case of Saudi Arabia, China recorded imports of 316,068 tonnes in January-April 2019 compared with 178,010 tonnes during the same period last year.

Another factor behind the bounce in styrene, ABS and SBR imports is “front-loading” of Chinese exports of finished goods in case there is another round of US tariffs.

“China’s auto parts, washing machine and TV factories etc. are working flat out in an attempt to export as much as possible to the US as a hedge against further increases in US tariffs. This helps to explain the April rise in styrene and styrene derivatives imports,” said a Singapore-based styrene trader.

The US has threatened to levy 25% tariffs on a further $300bn worth of Chinese imports from as early as this July. Consumer electronics, footwear and apparel are some of the sectors under threat.

Front loading of exports explains why China’s Caixin Purchasing Manufacturers’ Index (PMI) for May remained unchanged from April at 50.2, whereas the official government PMI fell below 50 – into contraction territory. The Caixin index focuses more on the private companies that are China’s biggest exporters.

Dr Benzene to remain on the treatment table

In my previous post on benzene, I gave you two scenarios for the future of benzene and the broader Chinese economy:

The good news is that since then President Trump appears to have walked-back a conflict with Iran. But in the intervening weeks we have seen the trade war intensify with China, with a major focus on trying to stop China’s technological rise. The president has also said he will extend tariffs to Mexico.

As things stand today, take Scenario 1 as your base case, but add the extra downside of an even worse US/China relationship and the negative effect that this could well have on the Chinese economy. We also have the risk of the tariffs on Mexico and maybe even on other developing countries.

Might Chinese economic stimulus turn this around? Don’t bet on it. As I said earlier, the extent of bad debts has limited the effectiveness of stimulus so far this year and there is no reason to believe this will change.

Benzene spreads at today’s levels seem likely to therefore persist throughout the rest of this year and into 2020.

The only good news is that events can change in the time that it takes to type a tweet. Nothing can be discounted, including a temporary end to the trade war, just in time for next year’s Presidential Elections.

Or things could easily get even worse, so erratic is policymaking by the world’s most-powerful leader.