US LLDPE imports and the impact on European petrochemicals 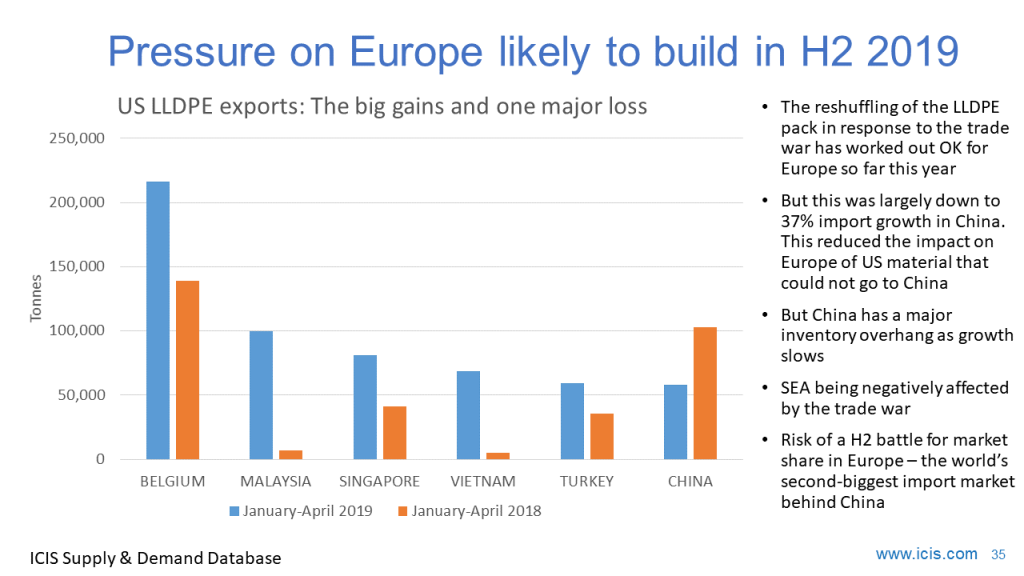 EUROPEAN linear-low density polyethylene (LLDPE) markets have yet to feel the full effect of the big increase in US production in 2019.

One of the reasons is that some Middle East material that should have gone to Europe was diverted to China in January-April. Netbacks to China were stronger because Chinese import demand went through the roof. The fall in Middle East availability helped to mitigate the rise in US shipments to Europe.

In January-April of this year, US exports to some European destinations were sharply higher. Shipments to Belgium were for example at 216,555 tonnes versus 139,294 tonnes during the same months in 2018. Belgium is a major transit point and so a pretty good proxy for the rest of Europe.

At the same time, Saudi shipments to China saw a smaller but quite significant increase. January-April shipments were at 339,526 tonnes versus 279,723 tonnes during the same period last year.

What also helped keep the pressure off Europe was the US ability to make up for weaker trade with China – the result of additional Chinese duties imposed because of the trade war- through stronger shipments to other countries. In January-April, again on a year-on-year basis:

Those who fall into the “everything will inevitably turn out alright in the end” camp argue that this data point to a comfortable balance.

Higher US exports to Southeast Asia (SEA) do not matter as SEA exports to China have risen, filling the gap created by reduced US availability, they say. This trend will continue. Europe doesn’t therefore have to worry about too much pressure from US LLDPE.

That’s not what the data and market intelligence is telling us. Collectively, Malaysian and Singaporean January-April exports to China fell to 296,869 from 320,306.

Thailand did see quite a big gain in the China market as did Indonesia. But if you add Malaysia, Singapore, Thailand and Indonesia, they made a net gain for 49,379 tonnes in China in January-April. Meanwhile, US exports to these four countries jumped by 197,571 tonnes.

Vietnam is undoubtedly benefitting from the increased pace at which low value manufacturing is relocating from China because of the trade war. But for how much longer? This CBNBC article further underlines how China is building closer links with the rest of the developing world, in this case through lowering trade barriers.

The US raised its exports of LLDPE to Vietnam in January-April to feed plastic converters, some of which were under Chinese ownership. New Chinese-owned converters have been set up in Vietnam in order to export finished plastic products to the US, thereby avoiding US tariffs on Chinese plastic products imposed as part of the trade war.

The risk is that when the US realises its trade deficit is falling with China only to rise with other developing countries, it will extend to the trade war to these other countries.

The broader problem is the damage to growth across SEA being caused by the trade war. Countries such as Vietnam are net beneficiaries, but other countries are net losers because they depend on a healthy overall global economy – and especially a healthy China because of the close trading links between SEA and China. Take Singapore as an example. Its exports, excluding oil, fell by 15.9% in May.

PE market sentiment is also weak across SEA in general because of again the trade war. This suggests that a lot the US LLDPE shipped to the region during the first four months of this year might be sitting somewhere in warehouses.

The US has gained a market share in Turkey as its overall LLDPE demand has shrunk on a weaker economy. But Turkey’s economic problems persist, suggesting that at some point US exports will come under pressure.

Then there is China itself. Apparent LLDPE demand in January-April (net imports plus local production) increased by 15% year-on-year. This included a 37% of net imports of 1.9m tonnes.

But real Chinese demand growth, when adjusted for inventory distortions, could be as low as 6% across all grades of PE for the full year 2019. Let’s assume that 6% applies to LLDPE. This indicates January-April overstocking of around 655,000 tonnes.

This might have already led to a dip in Saudi and other exports to China in May (the May China import/export data should be released shortly). Saudi Arabia may thus have diverted additional cargoes to Europe in May-June. Or China’s import demand may have offered some further support, but only at the expense of further overstocking.

If the trade war drags on the damage to the SEA and Chinese economies will increase, dampening LLDPE import demand. Exporters might end up switching more of their focus to Europe, the world’s second-biggest import market behind China. The US can compete very hard in Europe because of its low cost base.

Or Presidents Trump and Xi could reach a trade deal on 29 June when they hold discussions in Osaka, Japan, on the side lines of the G20 meeting. This would lead to a bounce in confidence and a recovery in PE spreads over naphtha.

But would a deal be a substantive and would it stand the test of time? In my opinion, “No and “No”, unless the US abandons its America First approach or China scraps its state-subsidy led economic growth model. The odds of either of these events happening are very low.

Something will have to eventually give in Europe as it faces pressure from more LLDPE imports. European producers may seek their own tariff protection in order to prevent deep and long term operating rate cutbacks.

When you make cracker cutbacks you lose output not just of PE but also propylene, butadiene, aromatics and their derivatives. There is more at stake for the producers than just loss of LLDPE revenues.

You should therefore prepare for a scenario where regulators back petitions from European LLDPE producers for anti-dumping or safeguard duties.

There would be nothing unique or novel about new European duties on LLDPE imports. The duties would be just one example of a shift towards a more fragmented and less globalised trading environment across many goods and services.

We have entered a new era of anti-globalisation. How long will it last? Assume and plan for at least a decade while hoping for something a great deal better.