Asian polyethylene shutdowns? Once again, good luck with that idea 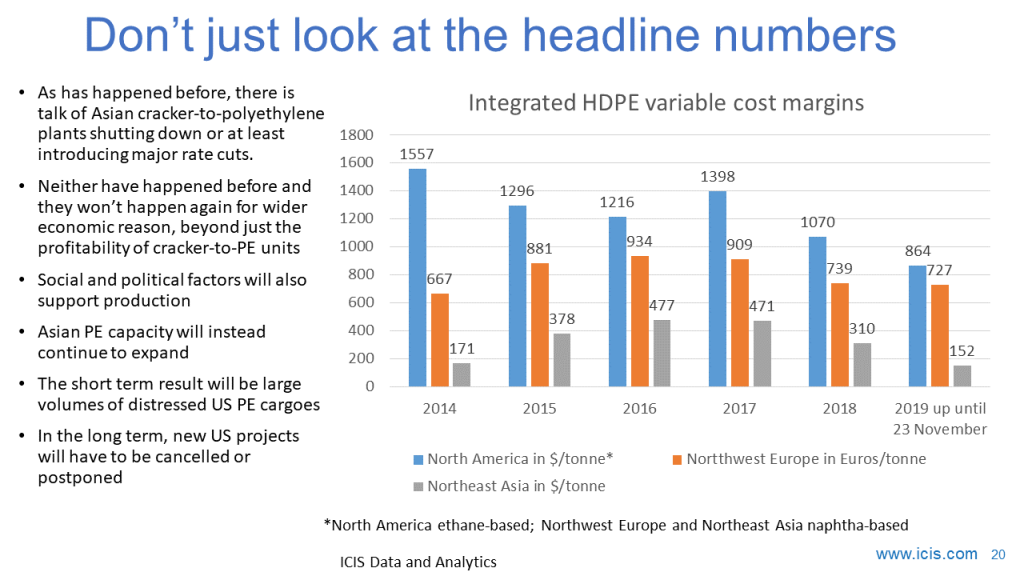 I was new to the game as I had only been analysing the petrochemicals business for 12 months. Hence, when a US industry executive told me that South Korean cracker-to-polyethylene (PE) plants would shut down, during the Asian Financial Crisis, I almost believed him. This was until I made my first visit to South Korea during which I quickly realised he was talking utter nonsense.

The exact opposite has happened in South Korea. Back in 1998, its PE was 3.3m tonnes/year but by last year it had reached 4.9m tonnes/year.

Here we go again. A full 21 years later, there is talk of permanent cracker shutdowns across Asia in general.  If not shutdowns, the wide expectation is that there will at least be deep operating rate cutbacks to compensate for the vast, and I mean vast, US-driven oversupply in polyethylene (PE).

No matter how bad profitability becomes on a variable cost basis for cracker-to-PE plants that buy merchant naphtha, which is the basis for our variable cost margin assessments, no Asian complex is going to shut down. The reason is that defining the economic boundary in this way is only moderately useful. Many crackers get discounted naphtha because they are either close to refineries our under joint ownership with refineries.

Closing a cracker down is a huge economic decision as you would have to be confident that market conditions would not improve within a few month, enabling you to at least cover variable costs. History is again useful here in that I haven’t come across a period when variable margins have been negative for more than a few months.

You might have contract commitments to supply downstream off-takers of cracker derivatives. Breaking these commitments would incur heavy financial penalties. Cracker restart costs can run into the millions of dollars.

Most importantly of all, Asian crackers, as with those in Europe, do not operate on metaphorical islands. Social and political factors will come into play as governments support local cracker industries, very probably through anti-dumping and safeguard duties against US PE if things get really bad (and, my view, they will get really bad. This is not a typical down-cycle). Close a cracker down and you destroy jobs across a wide range of downstream industries.

The survival of an associated refinery might also be jeopardised if a cracker closes as the refinery would have nowhere to sell its naphtha. Importing gasoline, diesel and kerosene etc. can be very costly, assuming there is even infrastructure available for imports. Shutting a refinery is often be nothing short of a hammer blow to a local economy.

Government ownership and the bigger picture

As my first trip to South Korea taught me in 1998, petrochemicals businesses can often be subsidised by other subsidiaries within the Chaebol, the big South Korean business conglomerates. This makes perfect sense as in one year, say the steel plant is losing money and the next year it is the turn of the petrochemicals.

Another aspect of the story is government ownership of petrochemicals assets. The Asian petrochemicals business is not just about making money, but it also about the broader development of economies in all sorts of ways. In Malaysia, for instance, part of the rationale behind the giant new RAPID project is too boost the Kuala Lumpur Stock Exchange in order to support pension funds. Malaysia has an ageing population and so it needs stronger pension provision.

China is the most standout example here where Sinopec, PetroChina – and even the new private companies that are being allowed to build crackers for the first time – are to a significant degree arms of the state. This is about using petrochemicals to achieve two major state objectives:

Another example of the heavy influence of the state is in Thailand where a big portion of the industry is owned by the government. Thailand also has ethane crackers that always have a competitive edge in PE production versus naphtha crackers. “Tough it out” might thus be the Thai philosophy in PE markets such as Vietnam where there is fierce US competition.

Forget, therefore, as I said any notion of cracker shutdowns in Asia with the exception, perhaps, of very old crackers that have ended their useful lives. And anyway, any such shutdowns would be “scrap-and-build”, replacing old crackers with new crackers, and will be nothing to do with weaker market conditions.

Don’t even expect deep operating rate cutbacks. In South Korea, it will still be about making money across the whole Chaebol; in China, it will be about guaranteeing full employment in washing machine and TV factories downstream of crackers, even if running at close to 100% means heavy losses for the crackers.

“Ok, you might be right, crackers are unlikely to shut down and operating rates will not be cut back in a big way. But, surely, won’t new Asian PE investments be cancelled or postponed as the down-cycle gets worse?”No. Because the Asian industry isn’t just driven by profits, I think it more likely that capacity expansions will continue and will some locations gather pace.

In China, for the reasons I’ve already cited above, there is a no scenario under which scheduled capacity additions will not happen. Its PE capacity is due to increase from 18.5m tonnes/year in 2018 to 30.2m tonnes/year by 2025. Also expect announcements of new projects  in order to push harder towards self-sufficiency, as the trade, technology and geopolitical wars between the US and China intensify.

China has a vision for increasing petrochemicals self-sufficiency both domestically and through partner countries that will be part of its giant new trading and geopolitical zone it is building in order to counter the US. Most of the rest of Asia is likely to be within China’s new zone, so expect PE project announcements in countries such as India that will justified on exporting to China.

Conclusion: The US is in trouble

In the short term, there will be a lot of US PE cargoes available that cannot find homes either in Europe or Asia. As I’ve now discussed in my posts over the last week, crackers will not shut down in either region and neither will operating rates be significantly reduced. Meanwhile, the US will continue to run its plants hard in order to dispose of surplus ethane.

The long term carries the risk of distressed US assets and of course project postponements or even cancellations in the US. It is hard for me to see how the next wave of US crackers-to-PE plants can be justified.