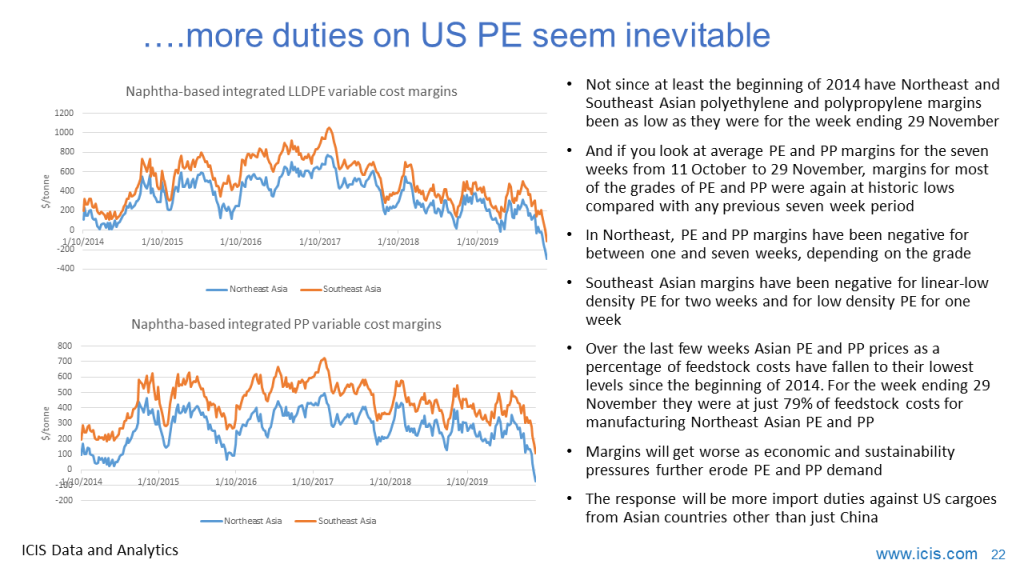 NOT since at least the beginning of 2014 have Northeast and Southeast Asian polyethylene (PE) and polypropylene (PP) margins been as low as they were for the week ending 29 November. We only began our margin assessments in 2014 and so last week’s margins may be lowest for an even longer period.

And if you look at average PE and PP margins for the seven weeks from 11 October to 29 November, margins for most of the grades of PE and PP are again at historic lows compared with any previous seven week period.

The collapse in margins across both regions during both October and November can be partly attributed to more expensive naphtha.

Sometimes the speed of naphtha cost increases on a week-on-week basis can be a temporary factor behind collapsing PE and PP margins. Polyolefin producers always struggle to fully on pass rapid rises in raw material costs to their customers. Not on this occasion as naphtha costs have steadily risen over the last two months. There have been dramatic increases.

Surely this has to be game, set and match. There must be no doubts remaining that we are in a historically severe industry downturn. In the case of PE this is the result of the vast oversupply resulting from increased US capacity – along with a weakening global economy and the fall in demand resulting from the plastics rubbish crisis.

PP has to date not suffered as severe oversupply pressures. Not until next year will PP be affected by a significant rise in capacity. But the fall in margins clearly tell that the the demand of PP is already struggling.

It would be wrong to assume that our margin data point towards immediate cutbacks in Asian cracker operating rates for all the reasons I discussed in detail last Monday.

Some naphtha crackers are a lot more efficient than the typical Asian cracker we assume for our margin analysis.

Liquefied petroleum gas and methanol-based PE and PP margins, whilst also down over the last few weeks, are faring better than naphtha-based margins. The methanol margins apply to the handful of Chinese coastal methanol-to-olefins and then polyolefins complexes that import methanol.

The problem, though, is we haven’t seen anything yet. I fear that market conditions will continue to deteriorate until even the crackers quite far to the left of the Asian cost curve are in trouble

But then the social, political and wider macro-economic factors that I again discussed last Monday will come into play.

Even the least efficient of South Korea’s crackers have rarely, if ever, cut back on operating rates as they are part of the big industrial groupings, the Chaebol. Petrochemical subsidiaries are always cross-subsidised by other business units within the same Chaebol at times like this.

China will continue to run its crackers hard – and may even increase operating rates at its coal-to-olefins plants following government relaxation of environmental restrictions on China’s coal industry.

One of the main purposes of petrochemicals plants in China, both state and privately-owned plants, is social as well as economic.

The social objective is preserving jobs in downstream washing machine and consumer electronics factories even if this means running petrochemicals plants at a loss. Local and central governments step in with financial help for petrochemical plants during periods like this.

Most of the new PE and PP capacity in China is part of state-of-the-art highly integrated refinery-to-petrochemicals complexes. These complexes are not captured by our standard margin assumptions as they have superior economics.

There are wider social and macroeconomic development objectives behind these new Chinese complexes that also guarantee high operating rates.

Because China’s new refinery-cracker complexes are state-of-the-art, they are part of China’s efforts to escape its middle-income trap by moving up the manufacturing value chain. So of course production will be maximised even if margins are much weaker than expected.

“Trust no-one my friend, least of all the US” seems likely to be approach of Beijing in a world where aggressive US trade policy has fractured the old international order.

China can long be sure of continued supply of all the oil, gas and petrochemicals imports it needs to keep its economy on track. In petrochemicals, it will as a result maximise local operating rates in order to boost self-sufficiency.

More trade barriers against US PE

Something will have to give and it will not be the Asian cracker industry because of the vital role it plays in wider societies and economies.

What will therefore have to give will be US PE exports to not only China but also other Asian countries as more duties are imposed.

The trade war now looks as if it could well drag on until next year following Mr. Trump’s latest comments. Even a temporary truce, which was never going to solve all of the US/China differences, looks as if it is off the cards.

Effective total Chinese imports tariffs against US high density PE and LLDPE imports are thus set to remain at 36.5% (30% as a result of the trade war and the 6.5% already existing duties).

China is scheduled to introduce a 10% additional tariff on LDPE from 15 December. This would have again been on top of 6.5% existing duties

If market conditions become really bad, as I suspect they will, and if the relationship with the US remains as bad as it is today, perhaps China will go one step further. It might decide to issue a mandate preventing any purchases of US PE.

For other Asian countries, the route for protection against US cargoes could be via safeguard duties. Under international law, safeguard duties can be levied when domestic industries are suffering from foreign competition.

The alternative of antidumping duties could be harder to justify. They require proof that an importer is selling below their domestic costs of production. This seems problematic given the US feedstock advantage.

It seems inevitable that cracker-to-polyolefins project will have to be postponed. Postponements are rarely classified as cancellations for face or corporate reputation reasons. But some of the postponements will in effect be cancellations.

This is not a typical down-cycle, however, that will right itself in a year or three years at the absolute outside. Traditionally, of course, this has happened as cancellations have eventually tightened supply and led to a return to stronger margins.

There are two things that are different this time around. One is the structural and long term slowdown in China’s economy. And the second is the erosion of PE demand resulting from sustainability pressures.