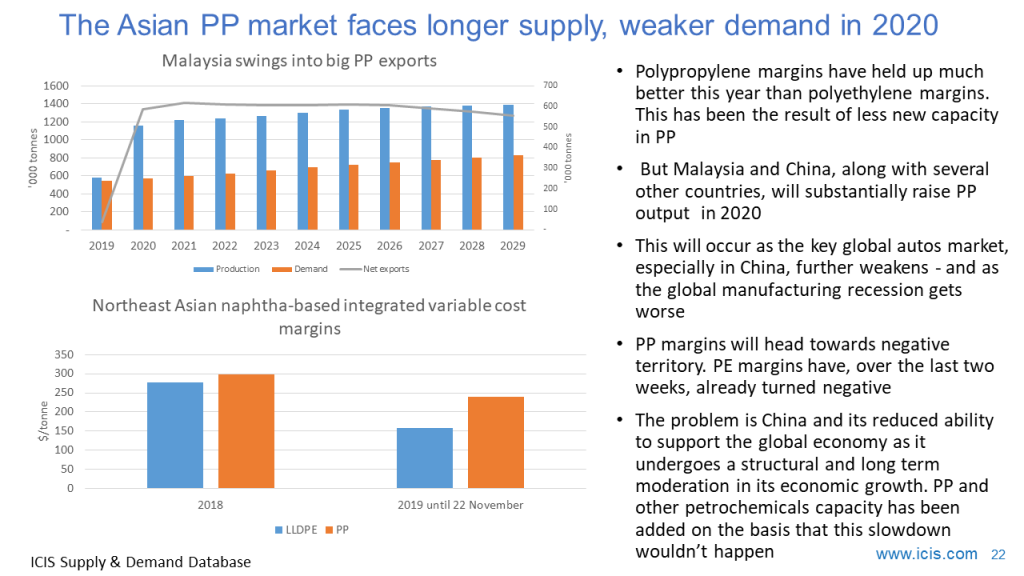 THE ASIAN polypropylene (PP) market hasn’t been as bad as the region’s polyethylene (PE) market in 2019 because of much more limited increases in supply.  Whereas the PE market has been flooded with new US production, especially in linear-low density PE (LLDPE), increases in PP output have been much lower.

Not for much longer. There will be further weakness in PP demand from key end-use sectors such as autos as a big rise in PP production takes place in 2020 and beyond.

There is no question in my mind that we already in a global manufacturing recession and have been for several months.

I make no apologies for repeating this again as still, despite all the statistical evidence, far too few people are listening: The main reason for the recession is China’s structural long term slowdown. The trade war is only a secondary and less important factor.

In order to further emphasise this point, Fitch Ratings estimates that global auto sales will be down by 3.1m vehicles this year over 2018, a larger drop than in 2008. Fitch blames the bulk of the decline on China where January-October 2019 sales of new vehicles were down by 10% versus the same months last year.

As I discussed on Friday, annual average sales growth of new autos in China in 2018 and 2019 is set to fall by almost exactly the amount that it increased in 2009-2017. We have moved into a post peak stimulus period for China new vehicle sales. There can be no return to peak levels of sales for debt and demographic reasons.

Meanwhile, with China’s new vehicle sales likely to again decline next year (I am forecasting an 8% drop over 2019), there will be big increases in PP output in Malaysia and China. Vietnamese production is also set to increase. Elsewhere, Russia will add substantial new output in 2020 and beyond.

But here I just focus on Malaysia and China as it in these countries where the biggest changes in capacity will take place.

We will also see a deeper global manufacturing recession in 2020. This will be due to the continuation of the trade, technology and geopolitical wars between the US and China and global demographic and debt problems.

The $64,000 unanswered question is when the recession will spread to equity markets. This would require a trigger or a catalyst. The timing and nature of these catalysts are very hard to predict.

The biggest shift in terms of PP trade flows will occur in Malaysia as a result of increased operating rates at the new RAPID complex, the joint venture between Petronas and Saudi Aramco. As recently as last year, Malaysia’s was in a small net import position – 43,000 tonnes. We are forecasting about the same level of net imports for 2019.

China is always the big elephant that rarely sits quietly in the corner of the room – and it is in China where the most significant shift in PP production is about to take place.

The conventional and always wrong view on China is that its petrochemicals capacity is entirely responsive to market conditions. This is not supported by evidence on the ground, from talking to people in the know. Neither is it backed by analysis of historic operating rates in the context of the macroeconomic background.

In the past we have very often seen Chinese state-owned petrochemicals plants maximise production, even in weak market conditions, as their main purpose is not to make money but to instead keep people in jobs downstream, in washing machine and consumer electronics factories etc.

An increasing number of Chinese PP plants are in private hands. But they are likely to still run hard in weak market conditions, thanks to preferential loans from local and central government.

Motives for running hard in 2020 onwards will be not be just do with preserving downstream jobs. China wants to be much more self-sufficient in petrochemicals in general because of the very uncertain global trade environment, thanks to the policies of the White House.

Most of China’s new capacity – 3.2m tonnes/year out of the total 2020 increase over 2019 of 3.6m tonnes/year – will be state-of-the-art world-scale facilities fed by naphtha, refinery propylene, propane or imported methanol feedstocks.

These plants – because they are state-of-the-art – will run at high operating rates as part of China’s efforts to escape its middle-income trap through moving up the manufacturing value chain. Expect these facilities to heavily focus on higher value copolymer PP as well as just homopolymer grades.

One of my contacts has raised a valid query over how hard coal-based PP plants will run in 2020. In 2018 and 2019, their operating were reduced because Beijing’s campaign to improve air quality.

Weaker economic growth has led the Chinese government relax environmental regulations on coal-based industries in general. This will lead to higher coal-based PP capacity utilisation in 2020 and beyond.

PP plants based on feedstocks other than coal will continue to dominate capacity additions in China. This will result in coal-based PP’s percentage share of total capacity gradually declining over the next few years.

Put this all together, and, as I again discussed on Friday, China’s 2019-2030 PP demand is likely to be lower than our base case with operating rate higher. Under my alternative downside scenario, this will result in:

The Asian PP industry has done better than the PE industry in 2019 because, as I said, the burden of new capacity has not been as heavy.

It is a similar story in PP versus high-density PE and LDPE in both Northeast Asia and Southeast Asia, and in liquefied petroleum gas feedstock as well as naphtha.

Delve into the data behind our assessments and the drop in co-product credits in PP and LLDPE is pretty much the same.

The difference is that whereas PP prices are down by 11% in 2019, LLDPE prices are down by 17%. Feedstock costs are actually cheaper this year than in 2018 for both PP and LLDPE. This is thus a story of weaker producer pricing power in PE compared with PP.

I expect PP margins to continue to fall in 2020 towards where PE margins are today. A sign of where we are heading has occurred over the last few weeks:

Another my contacts has made the point that Chinese car ownership is just 180 per 1,000 people versus 435 in Malaysia and 230 in Thailand. In the US and the EU, ownership is at 840 and 545 respectively.

I don’t dispute that Chinese new vehicle sales will eventually return to positive growth. It just that we won’t see the stellar growth rates we saw in 2009-2017. This is the critical difference. T

Take away the kind of growth that we saw in 2009-2017, not only in Chinese autos but also in the economy as a whole, and you take away much of the recent momentum behind the global economy.

A major problem is how conventional forecasters forecast. They look at recent history and assume that this will reflect the future without always taking into account one-off factors behind recent trends.

A narrow very sliver of history, the years between 2009 and 2017, were taken as indicating a permanent shift in China to levels of consumer demand which would see it quickly catch up with the West.

This, sadly, isn’t going to happen for  debt and demographic reasons. This could and should have been foreseen. We have as a result been left with overcapacity in PE, PP and other petrochemicals.

PREVIOUS POST China new vehicle sales: A long term decline and what this means for petrochemicals
NEXT POST Asian PE and PP margins at lowest levels in at least five years and will go lower......